Jupiter, the Dog with a Martian Master 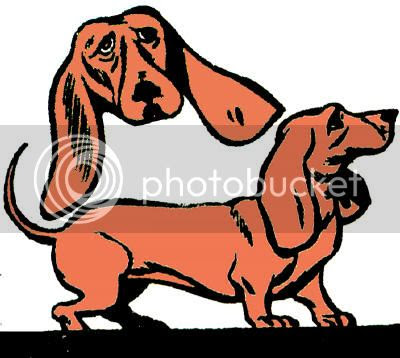 History:
One crisp winter morning, a Basset Hound was spotted paddling for its life in freezing water under the city bridge. It seemed certain to drown unless someone intervened, so sympathetic police detective John Jones halted his pursuit of a criminal to save the "poor mutt." Given Jones' secret powers as the Manhunter from Mars, it seemed a harmless gesture to allow the thief Fletcher to escape him temporarily. The dog was taken to Jones' precinct house, and Jones asked a desk sergeant to locate its master if possible. However, the dog managed to track Jones as he attempted to relocate Fletcher. The bark of this "friendly little chum" hurt Jones' sensitive ears and alerted Fletcher to his presence outside a safehouse, foiling the detective once again.

Jones locked the dog up in his apartment, traced Fletcher's path, but was again exposed by the arrival of the tenacious, noisy Basset. Worse, the dog could smell the invisible Jones, exposing him when the Basset appeared to float in midair on the Martian's back. Jones later learned that the dog had broken his apartment window, cut itself free of a leash with a piece of glass, then leaped to a nearby rooftop. Suitably impressed, Jones fashioned a cage for the dog out of bent golf clubs, gave it a sweater and food, then left it on the fire escape. Almost immediately, the dog treated its cage like a hamster ball, rolling down the escape and breaking free on impact with the alley below.

In the meantime, Detective Jones finally captured Fletcher at the old Bijou Theater, but an overturned lantern set the building on fire. Jones pushed his prisoner out of a low window to his salvation, but lacked the strength to save himself against his elemental weakness. Locked in an invisible state, the Martian was overlooked by firefighters, but scented amidst the smoke by his dog. The Basset managed to drag Jones to safety, and was gratefully adopted as "Jupiter," named after an exclamation of surprise Jones often let out at its antics.

Powers & Weapons:
Jupiter appeared to be stronger, smarter and possessed of more keen senses than the average Basset.

Created by Jack Miller & Joe Certa
Posted by Diabolu Frank at 12:01 AM

See, I thought there was some real chemistry here. Detective Jones + trusty floppy-eared hamster ball-rolling dog. It's too bad he kind of just disappeared.

And I had thought he was a Bassett Hound?

Somebody picked Jupiter up off-panel. It's too good a dog not to have a string trainer.

I'd have called Jupiter the Wolf with the Martian Master without prompts, I know so little about dogs. I believe you are correct and have made the necessary alterations. Thank you very kindly!

Yes, Jupiter is a basset. Bassets are tough, smart and possess keen senses, but they're also selfish and lazy. There is no way Jupiter would rush into a burning building to save J'Onn -- or rush anywhere to do anything -- unless burning Martian flesh smells like bacon.