The Vile Menagerie: THE INVADERS FROM THE SPACE WARP 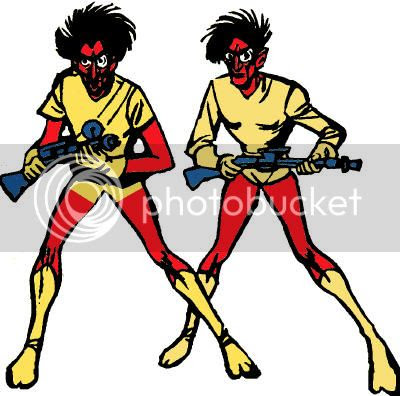 History:
On a parallel world in another dimension, a pair of criminals stole the designs for a weapon of great power. Pursued by authorities, the thieves found their way to a remote lab. As it happened, a scientist there had just opened a warp in space to another world. The pair decided that this would be an excellent escape route. The scientist warned that the space warp was temporary and would soon close, which suited their plans perfectly.

The Invaders landed on Jade Island, a summer resort in the United States of America. They immediately launched a robbery spree, gunning down anyone who would rise to stop them. However, they were soon followed by R'ell, a fellow from beyond the Space Warp who had been in pursuit of the criminals. Encountering R'ell, the Invaders opened fire, chasing him into a nearby forest. Their ray blasts attracted the attention of the local super-hero, Martian Manhunter, against whom their weapons and angry telepathic cries had no effect. J'onn J'onzz knocked the pair out and had them locked up in the local jail.

Upon awakening, the Invaders vibrated until the door to their cell came unmoored, then crumbled an exterior stone wall to escape. They returned to the woods of Jade Island, finding brief refuge in a dilapidated house. The Invaders were followed by vacationing policewoman Diane Meade, whom they captured and used as a hostage. The Invaders were located by the Martian Manhunter and R'ell, but it was the interference of a tag-along animal from the space warp, Zook, who ended their standoff. The criminals were grabbed by the Manhunter, and while their vibrations brought down the weathered house, J'onzz's grip held true. The Invaders and R'ell were flown back home through the space warp, where the criminals were presumably held accountable for their misdeeds.

Powers & Weapons:
The Invaders from the Space Warp carried rifles that fired rays capable of stunning a human being, but were ineffective against a Martian. They could vibrate their powers so strongly as to simulate an earthquake within a few hundred yards of their person.

Distinguishing Features:
The Invaders had red skin and large eyes which appeared to spiral. Though their hands were humanoid, the Invaders' large, webbed feet had only three goes each. These features appear to be present throughout their species.

Quote: "Not a step farther-- or we shall vibrate this house right over our hostage!"

Created by Jack Miller and Joe Certa
Posted by Diabolu Frank at 12:13 AM