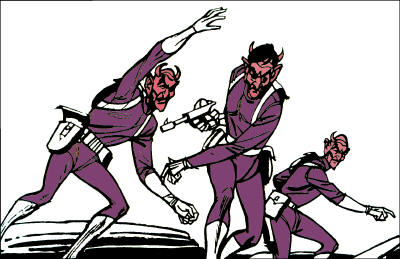 History:
L'lex Xanadar and two unnamed partners were infamous bandit brothers from the dwarf planet Pluto, known at least as far as Mars to inhabit the lawless B'ar Mountains. Following a successful heist orchestrated by the scientist Nar, the Devil Men decided to gun down their benefactor and divide his share three ways. However, the treasure needed to be recovered from Earth, and involved a scavenger hunt for parts to a robot that, when constructed, would uncover the loot. The Devil Men made no attempt to conceal their presence on Earth, swiftly attracting the attention of the expatriate hero Martian Manhunter. This was a minor concern, as Plutonian weaponry easily routed any attempts by the Manhunter to hinder their progress. The robot was swiftly constructed, but a booby trap planted by Nar gave the scientist the last laugh. The Devil Men appeared to perish when the robot exploded in front of them.

Powers & Weapons:
The Devil Men possessed a wide variety of powerful weapons, including individual Plutonian handguns that could fire shrink rays, energy blasts, and an ultra-violet light flash capable of uncovering an invisible Martian. The group carried Element X2, crushed herbs that would form a fiery powder, in their belt pouches. They could fly for an undefined period of time through Plutonian gas-propelled flight capsules. The Devil Men's interplanetary travel was provided by a flying saucer that could deploy a giant buzz saw to shear away trees and create a landing field.

Quote: "Tell the Martian, L'lex! Demonstrate how courteous and friendly we can be, despite our sinister reputations!"

Created by Jack Miller & Joe Certa
Posted by Diabolu Frank at 1:01 AM

I've often wondered if Llex's body was confiscated by Project Cadmus and used to create Dubbliex.