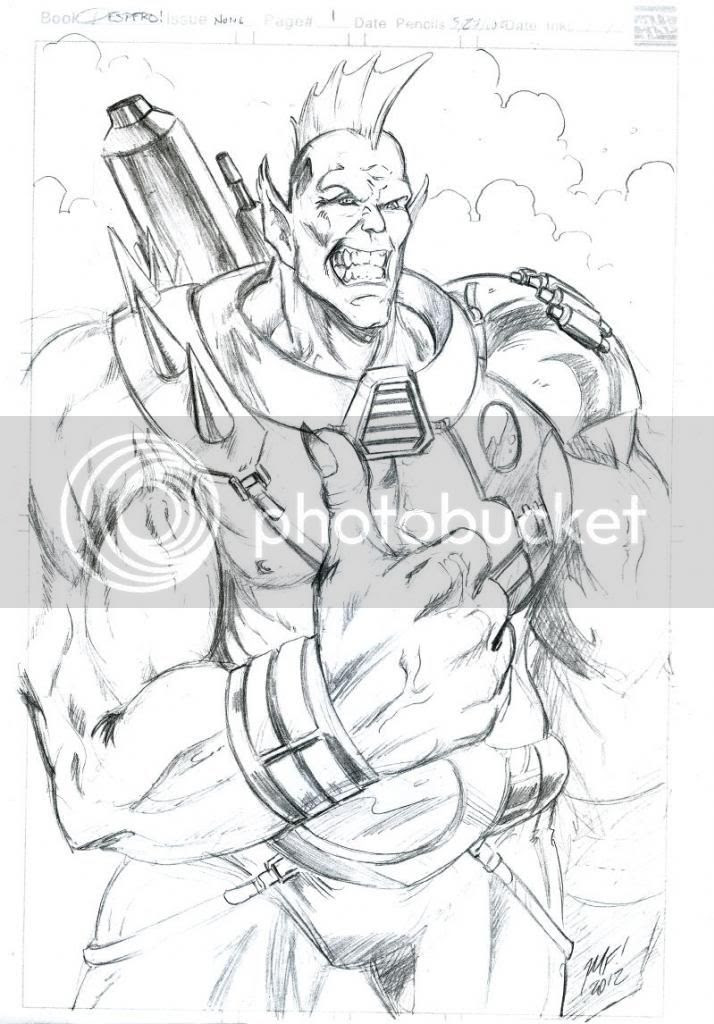 Matt Frank is an artist best known for his work on IDW Publishing's Godzilla comics, making him an obvious choice for a Vile Menagerie commission. Having drawn islands of monsters, Frank appeared equally adept with fur, scales, and any other freakish attributes the Martian Manhunter rogues are liable to display. He was an early favorite to do Mr. Moth, but then I researched Cody Schibi, who was an even more perfect match. I considered Gorilla Grodd, but felt that crossed over too much into the Flash's territory. I put together reference for Iwangis the Creature King specifically for Frank, but I simply had to get a Despero at Comicpalooza this year, and attrition pushed the Kalinorian ahead in line. I do think I gave Frank several options to choose from, but ultimately, he stepped up to the Justice League Task Force/Total Justice incarnation of Despero. With the guns and sword and body armor, that incarnation had an outrageous excess that endears.

Initially, Frank wasn't even going to be doing commissions, so it was a little insane when I talked him into filling one of my decades old 11" x 17" art boards with a fully inked piece for just $40. Frank's a really nice guy, and a buddy of mine was getting a Godzilla commission for a mutual acquaintance, plus his workload started to pile up from there. We eventually talked it back down to pencils after he'd spent a good deal of time on the project, and I'd felt guilty taking advantage of him. Frank texted me what he initially thought was the finished piece, and I wish I could figure out how to get it off my phone, as this "variant edition" had Despero shaking his fist at the viewer. Frank was inspired to make an alteration, and once he asked me whether this Despero had claws, redrew the hand into an entirely appropriate '80s cheesy action flick "thumbs up." There was also comedy in the original snapshot, since it was taken at such an angle that it made Despero look like he had a shrunken head. Remember that afflicted hunter from Beetlejuice? Yeah.

I believe Frank is coming back to town in 2013, so maybe I'll get him to do a mammalian menace next time. Meanwhile, take a gander at his web site and deviantART gallery. You'll be glad you did!
Posted by Diabolu Frank at 12:00 AM

Very nice sketch. It shows the cockiness of Despero.