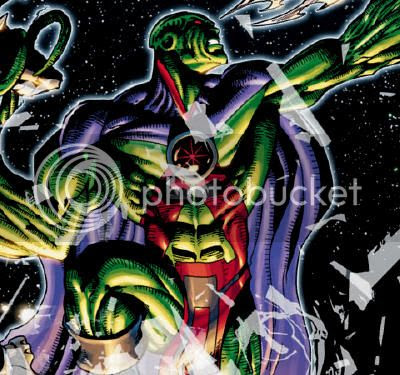 Idol-Head regular commentator will_in_chicago alerted me to an MTV exclusive news story before any of the comic-specific outlets could deliver the word.* The Manhunter from Mars will receive a monthly back-up feature in the pages of the new Justice League of America series, validating the extra dollar cover price in the same fashion as "The Curse of Shazam" in the main Justice League book. I confess to some ambivalence about the creative team of Geoff Johns, Matt Kindt and Scott Clark, but I'm buying the book anyway, so I much prefer a J'Onn J'Onzz back-up of any kind to other members of the team filling that slot (although I would be tempted to trade out Vibe for Justice League of America's Martian Manhunter, the indefinite series.) The bloom was off the Johns rose years ago, and I've somehow managed to read absolutely nothing Kindt has written. I was a fan of Clark's art in the '90s, but he's dreadful today with his heroin chic digitally lacquered chicken scratch, and I find it telling that articles keep throwing up Dave Finch Manhunter Manhunter images instead. On the other hand, Johns is adept at rebuilding icons, and Clark's rendition of the Alien Atlas and Miss Martian have been solid in the past (especially when "painted" in Justice League: Cry for Justice.) Kindt's the only one talking to the media about the project so far though, and his words fall a bit short of heartening. For instance, I want a new writer to talk about how they've always liked/had a strong interest in the Martian Manhunter, even if they're full of it. That's comic book boilerplate, equivalent to jocks discussing giving 110% on the field while thanking their deity of choice for granting a victory. Then of course you state your bona fides as a pro-fan by namedropping sacred texts. Batman writers all love The Dark Knight Returns and Man of Steel scribes these days typically nod toward All-Star Superman or "For The Man Who Has Everything." Martian Manhunter's catalog is much dodgier, but you could pretty much mention any of his eponymous series and get a green light from readers, though Ostrander/Mandrake, Giffen/DeMatteis or American Secrets would get the best popular reception.

Kindt instead said, "I hadn’t thought about [Martian Manhunter] for a while, but I knew this was coming up, so I went back and read a bunch of things." Seriously, "things?" What "things?" There aren't a lot of things out there beyond comic books involving the Sleuth from Outer Space, which limits the options of the most vague statement possible, but you still can't rule out the sum total of Kindt's research being coloring books and greeting cards. I don't think "Martian Manhunter is holding back an army of creatures... FINISH THE PICTURE" quite cuts it. You know, this blog is a thing. I got the thing you need right here, baby. C'mere. That's right. Kindt continues projecting indifference and passive opportunism by offering the laziest character observations possible, including such old saws as "Martian Manhunter is just like Superman, 'cept different," and "gee, he's really an alien" and "golly he has a lot of powers" and "it isn't easy being green." How profound, Wizard! Kindt has been writing books about spies and psychic mind tricks, and says the Manhunter strip will be about spying and psychic mind tricks. He's going out of his way to make sure the back-up is enslaved to each issue's main narrative as a side story instead of being independent. The focus appears to be on how crazy powerful J'Onn J'Onzz is, rather than his history, personality or supporting cast, and the writer practically ran away screaming at the mention of a humorous element like the old Oreo addiction. So basically, Matt Kindt ticked off a veritable checklist of everything I don't want in a Martian Manhunter strip, as demonstrated in every other failed initiative with the character, even vaguely alluding to the probability that all the building up of the Martian Marvel will end with his being jobbed down the line. I went into the launch of Stormwatch with a lot of hope and optimism, so it stung when that book stank up the place. The good thing about this interview is that my expectations going into the Martian Manhunter back-ups are about as low as possible. Rather than "onward and upward," I'm braced for "numbing adequacy." Cheers. * Actually, its being buried on CBR's Robot 6 blog, bundled with several brief items on Newsarama, and overlooked entirely by Comics Alliance and Bleeding Cool tells the tale of how far our favorite Martian has to go to earn any industry respect. I'd have missed this if not for Will and Anj, although Comic Vine and The Source blog did give the news proper attention.
Posted by Diabolu Frank at 12:40 AM

Frank, I am going to try to keep some hope, but I would have loved a few references to American Justice and other quality stories involving J'Onn J'Onnzz. I would hope that the back up stories are perhaps related thematically than directly to the main JLA story. Then again, I think that to be a Martian Manhunter fan is to be well acquainted with disappointment.

Frank, would you like me to link your take to the CBR discussion I mentioned here on the blog yesterday?

I agree that this interview wasn't all that exciting, for the reasons you mentioned. I'm just glad he's getting a bit of a spotlight; Also, the Spy bit is a good take, even if his hold on the personality ain't there.

Wow, that was quite a rant!

Incidentally, when interviewed about jumping on Aquaman art duties, all Paul Pettetier could must up is something like "I've always wanted to work with Geoff Johns."

Joe, it's here or out on the street, and the police don't pick me up as often when I stay on the internet in my tinfoil hat. Wow, that Pelletier quote was quite the first salvo in the upcoming and sure to be ongoing internet conversation "No, I'm not Ivan Reis, and I wish they didn't take the Hulk away from me so I wouldn't be here for you all to hate me."

You are quite the Negative Nelly, Frank.

Negativity is like paranoia. Just because you reflexively, presumptively, with very little data assume the worst doesn't mean it won't end up sucking, just as expected.

In my world, negativity is the same as realism. But I'm a pessimist. I had zero hopes of Stormwatch being anything decent.

Weird (and quite telling) that Geoff Johns, who fans had always praised as being a writer who gets back to the essence of characters, picks a writer who wants to make a detective into a spy. Hmm.

"to me, he’s always been like Superman, except he wasn’t raised by human parents." Oy. Please, just take Superman out of the Martian Manhunter equation altogether. At this point, take the JLA out of the Martian Manhunter equation, too, and I think you have a better characterization and a stronger story because he's not compared to anyone else. Then there's no need to engage in pointless superlativs like "he's the most powerful" or "the most dangerous!" or my new favorite, "he's Superman, but not." He says he read a bunch of things but did he pick up a copy of Showcase Presents or even some Ostrander issues?

I'll buy a few issues because what the heck, let's see how bad this will be. Who knows, it might prove me wrong.

Low expectations are a great way to find happiness, for sure.

Liss, the important thing to remember is that Geoff Johns is co-writing this, and he tends to do his homework. Johns demonstrated a good handle on Manhunter in "Crisis of Conscience, and so long as he doesn't pull another Bratty Batson, I hope for the best of him here.

Matt Kindt though-- that guy should not be doing the talking at this juncture.