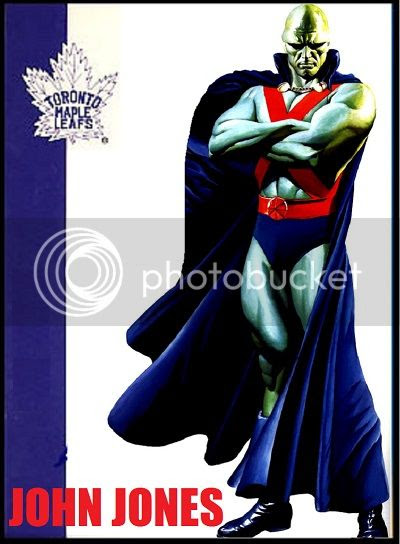 Let's play a relatively simple game of connect-the-dots. At this year's SDCC, just last month, Jeff Lemire said, "I have huge plans for Martian Manhunter next year... And it's going to be great." He later stated on his Twitter feed "not writing a Martian Manhunter book," though he added a "maybe :)" with regard to J'Onn J'Onzz appearing in one of his other titles. Today, The Toronto Star reported that DC Comics would be releasing Justice League Canada in Spring 2014. Spinning out of Forever Evil the Leagues will be so shaken up that a splinter group will end up working out of the Great White North. Most of the comic news outlets picked up the story, but only Comic Book Resources had an exclusive interview with the writer.

The gist of the change is that Lemire was going to take over Justice League of America from Geoff Johns, and Dan DiDio suggested shaking things up by moving the team to Canada. Lemire will introduce a newly created teenage hero and the New 52 Adam Strange, both Canadians. The action will take place in northern Ontario, and three members of the current JLofA will remain with the JLC. Lemire stated that the newly, ambiguously Canadian Booster Gold would not be appearing, but would not confirm or deny the inclusion of two other characters he's been writing, Animal Man and Green Arrow. Lemire has said that he would feature some oddball characters he loves, some fairly major heroes, and specified the inclusion of "a couple of cosmic characters," who will serve a team involved in more cosmic stories. Mike McKone will be drawing the book, and a Bleeding Cool report noted the use of the term "arc," which suggests that this may be a temporary run within the series. 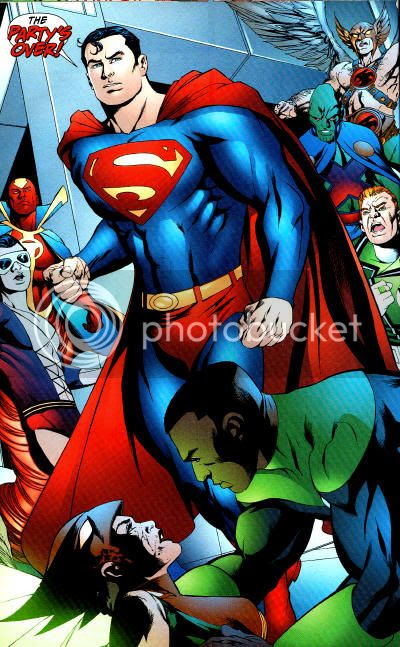 I sent out a tweet to Lemire hours ago with no response, though the guy's been busy promoting projects there all night. My thinking is that the previous statements make it pretty obvious that Martian Manhunter is on this team. J'Onn J'Onzz will be the featured star on Justice League of America for a five issue run under Matt Kindt, Doug Mahnke & Christian Alamy, running parallel to Forever Evil. The Alien Atlas will be dodging the armies of bad guys reigning over the U.S.A., apparently with Stargirl in tow, and escaping across the border wouldn't be out of the question. If Stargirl stays with J'Onn, it wouldn't be a stretch for the new teen Canuck to replace Vibe as her age-appropriate buddy/love interest. Vibe is based in Detroit, which is a three hour drive away, so he could join or guest star, but I'm guessing that Vibe is exactly the sort of dead weight they'd want to shed. Then again, Vibe's a better character in his own book, where he's run afoul of A.R.G.U.S., so he could very well need to flee the country.

I doubt Catwoman would make the same trip from Gotham, and did anyone really think she'd be sticking around past "Trinity War" anyway? Steve Trevor's out, since A.R.G.U.S. is tied to the U.S. government, plus Matt Kindt's writing Trevor's mini-series and Suicide Squad makes him seem that much more likely he'll become the new Rick Flagg. Amanda Waller could always build a new American team, or simply remain a thorn in everyone's side, but wouldn't be liable to retain official ties. 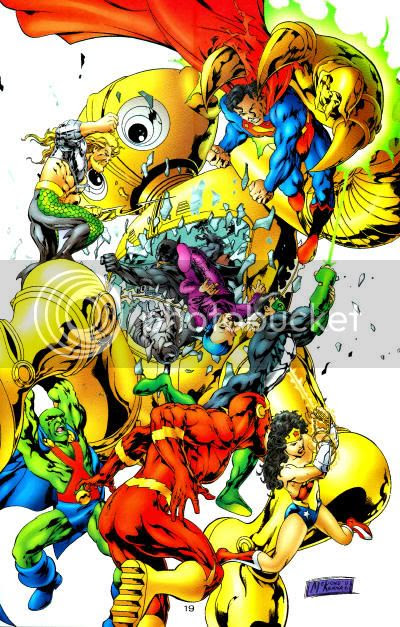 Stargirl has never wandered far from Geoff Johns' watchful eye, and I want to say that he's got more stories to tell with Simon Baz. A Green Lantern would make sense if Lemire wants to do outer space stuff, but there's an awful lot of flavors to choose from, and he strikes me as the sort who would prefer to go older school with a Hal Jordan or John Stewart. Hawkman and Adam Strange on the same team makes a heck of a lot of sense, both in dynamic and in cosmic ties. Katana doesn't seem to fit, and could simply shuffle off to Birds of Prey, but there's got to be some females in Team Toronto.

In the final analysis, Hawkman, Green Arrow, Stargirl, and Green Lantern would all be solid candidates for the two open slots on the JLC, but the money is super safe on Martian Manhunter as the third. Mike McKone is one of my all-time favorite Martian Manhunter artists, and I think he'll be even better on the New 52 design than he was on the OG. Teaming-up with Adam and Katar for mysteries in space would be like a dream come true, and much more a book I'd like to read than the government strike force we have now. I'm looking forward to hearing more...
Posted by Diabolu Frank at 5:53 PM

I find myself somewhat optimistic. I do not think that many of the JLA members will like Amanda Waller's plot. (It is tight for me right now, so I have little idea of any reveals in the Trinity War.) There is some speculation on message boards that Captain Atom could join the team.

Lobo is getting a redesign. Check out some articles and there is a surprise. (This may explain why Lobo's stories are inconsistent... but I kind of like my argument for an unreliable narrator who is likely insane or intoxicated while relating his tales.)

Lobo got a new, plausible origin in Stormwatch, as seen here, and a premise set up there could explain the redesign.

Somehow, attaching a team to an actual locale is reminiscent (at least to me) of JLI. I don't really know why, but maybe it's just that Canada makes me think "small town" kind stuff, which makes me think small and quirky stories.

And...Adam Strange? There's something I wasn't expecting at all. I'm happy to see his name again, but I've been burned too many times by DC to get my hopes up.

I'm actually really intrigued by this whole idea, and I haven't been excited about comics in years.

Also, I wonder what Canadians will think of this. Let's just hope they don't call the book "JL-Eh" and make it full of Canadian stereotypes.

Jeff Lemire is a Canadian and a big Silver Age fan, so I expect this arc will be as safe as it gets in the New 52. I do tend to associate Canada with comedy, but there's no such thing as humor post-Flashpoint, so I won't get my hopes up.