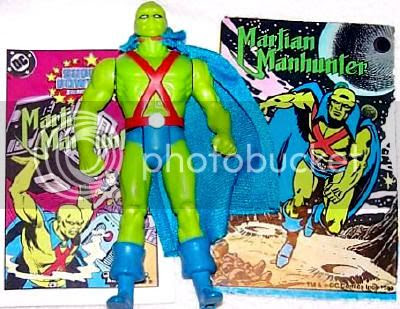 This may be hyperbole, but I tend to think the Super Powers Collection was the turning point of the Martian Manhunter's career. The character made regular, usually monthly appearances from 1955-1968. However, J'onn J'onzz did not successfully make the transition from background player to solo star, and was shuffled off the stage in 1969. For the next fifteen years, the Manhunter from Mars had only a handful of minor guest spots that tended not to show the character in the best light. However, things began to change in 1984, starting with a planned mini-series called "Jemm, Son of Mars," which was to feature the nephew of J'onn J'onzz inheriting a heroic legacy on Mars II. The creators of that series were informed that the Justice League of America's longtime writer, Gerry Conway, had decided to lay claim on any future Martian adventures, turning Jemm into a red-skinned Saturnian. The interesting thing about the timing was that while Conway had toyed with the character in the past, why would he specifically decide 1984 was the perfect year for a Martian invasion, and the return of J'onn J'onzz to monthly comics? What made this such a fervent passion that he would torpedo the Jemm mini-series?

Meanwhile, the toy company Kenner had begun making action figures that year based on DC's style guides for their best known characters. The Warlord and The New Teen Titans may have been DC's top sellers of the time, but Kenner focused on stalwarts Aquaman (then only appearing in comics as a back-up feature,) Batman, Brainiac (in the recent Ed Hannigan robot mode,) The Flash (soon to be canceled,) Green Lantern, Hawkman (no series at the time,) the Joker, Lex Luthor, the Penguin, Robin, Superman and Wonder Woman. That first series exhausted most of DC's broadly recognizable characters, so the second series focused on some Bronze Age Justice League/Super Friends notables (Firestorm, Green Arrow, Red Tornado) with Kirby's Star Wars inspiring Fourth World characters (Darkseid, Desaad, Kalibak, Mantis, Parademon, Steppenwolf) as villains. The only oddballs were Dr. Fate and Martian Manhunter, who only had those recent style guides in common.

As it happened, the third and final series of Super Powers arrived around the same time production had begun on a Justice League relaunch whose nine hero membership consisted of five Super Powers toys, a sixth hero who was a variation on one, and a seventh that had been planned to figure into a fourth wave*. Prior to Super Powers, J'onn J'onzz was still formally known as the "Manhunter from Mars," and it was through the various Super Powers tie-in products that the first official "Martian Manhunter" logo was popularized/trademarked. J'onn J'onzz was the only League member to transition from the first to second volume of the book, the only one to have his own action figure, and one is left to wonder whether he would have been in either title were it not for that toy.

For my own part, the Super Powers Collection was my real introduction to the Martian Manhunter, as I'm sure he was for a generation of fans set up by the one-two punch of the toys and the irreverently revered Justice League International. All evidenced suggests that the majority of current comic book professionals either don't know or do not care about anything that happened in J'onn J'onzz's publishing history prior to 1985, so the toy line was essentially ground zero for modern Martian Manhunter fandom. Despite having been created in the mid-50s, he's somehow become a child of the Reagan years.

The synopsis of a guest-villain turn by the Manhunter from Mars.

*The other two were girls, and Wonder Woman was the only heroine Kenner tried to manufacture for the line.
Posted by Diabolu Frank at 12:00 AM

hey i checked out the link to the original Super Powers commercials what a blast! thanks! long live the 80's.