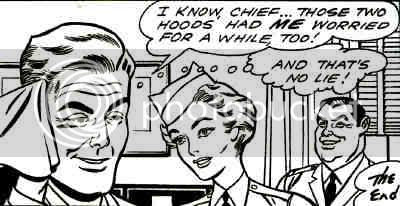 When I was first putting together my fan site "Martian Manhunter: The Rock of the JLA," I knew virtually nothing about J'onn J'onzz's adventures prior to the 1980s. As a regular on the DC Comics Message Board at the time, I made the acquaintance of U.S. Navy Commander Adam Benson, who posted from his ship under the handle "Commander Steel." Benson became my guru with regard to the Manhunter's Silver Age stories, and with his permission I edited together posts he'd made on the boards to create the first section devoted to the '50s and '60s on my site. I eventually caught up on the "House of Mystery" run myself, but before the "Showcase" edition of last year, my main connection to the "Detective Comics" feature was Commander Benson.

Like most of the old site, I saved the text from "Commander Steel's Notebook," and thought it would be nice to return the pieces to the web. In this edition, Benson spoke of his introduction to J'onn J'onzz and his supporting cast. If you'd like to read more, visit the index of his Commander Benson's Deck Log columns at Captain Comics and the Legion of Superfluous Heroes.

"I have been buying old issues of Detective Comics for years now--to collect the "J'onn J'onzz" stories, rather than the "Batman" ones. (I already own the Manhunter's complete run in House of Mystery.) My preference for the Manhunter from Mars is as the character was depicted in his DETECTIVE COMICS/HOUSE OF MYSTERY days (and in that incarnation, I suspect he would be almost unrecognisable to today's J'onn J'onzz fans).

The characters in the Manhunter's supporting cast from his old DETECTIVE COMICS days were his boss, Captain Harding, and his co-worker, Policewoman Diane Meade. The strip never made full use of these recurring characters, except to advance the plot and nothing more. The possibilities for good stories involving any of them abound. What if evidence appeared to show Harding or Diane to be a corrupt cop? Nor do detectives work in a vacuum--even in a small town like Middletown. There would have been a squad room of detectives with whom Jones worked and interacted every day. Even John Jones himself was never explored. I recall only one story which ever showed him in his apartment. The fact that the Manhunter was human in his John Jones form was rarely explored.

Occasionally, Diane Meade featured prominently in a story; but she was never given a background, depth, or much of a personality. The final panel of the story "The Cosmic Fun House", from Justice League of America # 7 (Nov., 1961), shows police detective John Jones out on a date with Meade. However, you really couldn't call his relationship with the girl a romance. I have over thirty of J'onn J'onzz's appearances in Detective Comics, including the last appearance of Diane Meade, in "The Death of John Jones, Detective" (Detective # 326 [Apr., '64]). If there was any scene of them going on a date, I do not recall it; nor was their deportment anything other than friendly-but-professional."

Edited by Frank Lee Delano from posts made by "Commander Steel" on the DC Comics Message Boards. All material used with the written consent of the author.

Labels: Captain Harding, Martian Manhunter, The Rock of the JLA

I feel the same way, so far, about Hawkman's Silver Age supporting cast. With the excepion of Mavis Trent, the repeating characters (Comissioner Emmett on Earth, Andar Pul on Thanagar) pretty much work as ciphers and plot devices. Of course, Hawkman had his sidekick and his romantic interest in one package, so there are certain economies because of that.

In the first issue with Diane Meade (Tec #246), there was certainly a hint that the two characters were attracted to each other. The story ends with John musing to himself:

"Her eyes sparkle so when she looks at me" Even if she does create a dreadful dilemma, I must admit it's fun having her along on a case! Yet would here eyes sparkle if she saw me in my natural guise--like this? Sigh. A Martian on Earth can lead an awfully lonely existence!"

Of course, that may be part of why there were no dates other than that JLA story. With Supes they could ignore that it was an interspecies relationship, but it wasn't so easy with a man who naturally had a different color skin.

Luke, I accidentally replied to your comment here under "Brave and the Bold." Beyond some rambling, ditto my feelings.

Pat, you speak truth. I don't think the Commander had Meade's first appearance when he made those comments 8+ years back. Diane also gave John a peck on the cheek in a story from the three-hundred-and-teens, though that may be a reach.