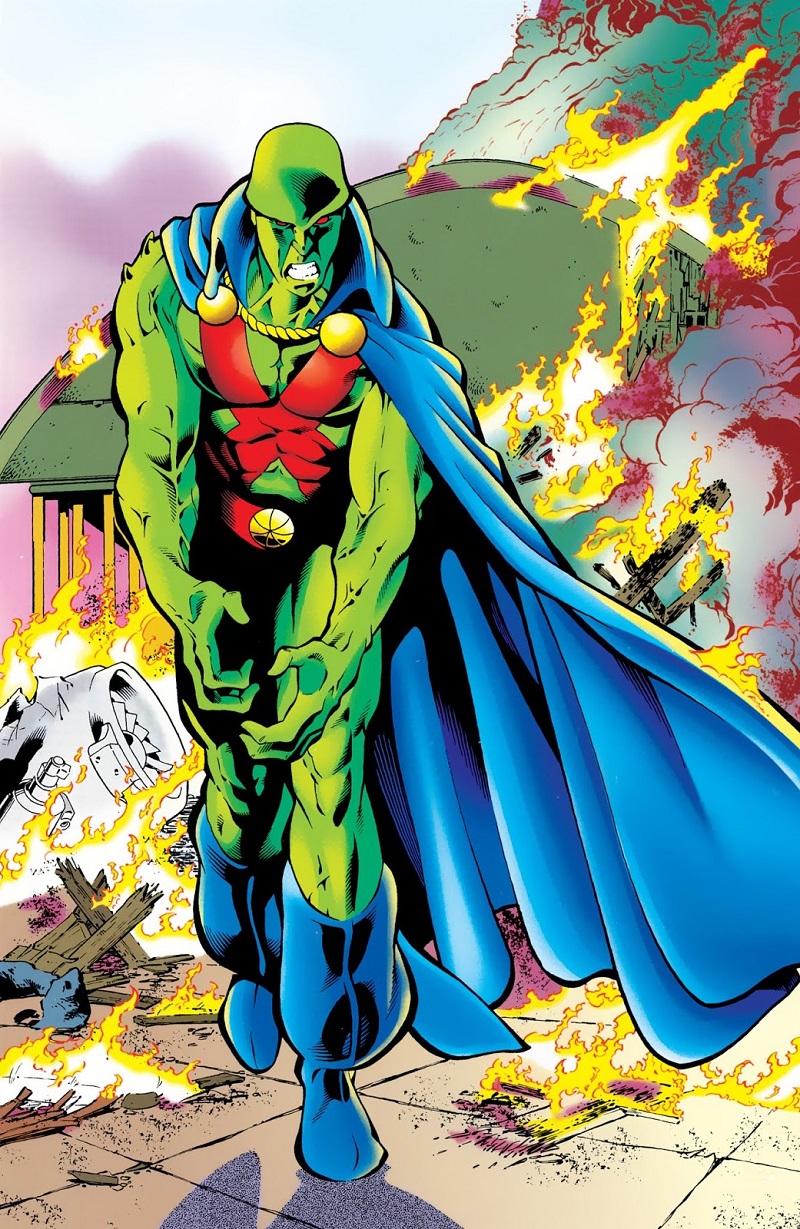 A Martian child sang to herself while working on her knees against a cliff face. "Causing trouble again, Little One? My daughter... the cave painter. We are barbarians now, are we?" From atop the ridge, J'Onn J'Onzz and his wife adjusted their extra-terrestrial telescopes. "Stop teasing her, J'Onn. How's the view?"
"Splendid. Never have we had a clearer look at the third planet in the Sol system. It is the second most beautiful thing I have seen today."
"Flatterer."

Crimson dust rose as the Little One flew up to her family. "Can we really see it, father? Can we? Oh the adventures we could have on such an alien world! I wonder what its inhabitants are like!"
"I doubt there are any, Little One! I cannot-- Oops! There I go... dropping the lens again! As I was saying... I cannot imagine what sort of beings... could possibly... live... there...?" Having jumped down to retrieve his lens, J'Onzz saw that his daughter had been painting familiar icons for Justice League members...

Clark Kent continued to analyse the situation. "So whoever's behind this wants to keep the established heroes-- and villains-- out of the game." Bruce Wayne employed the Bat-computer to locate some of whom he spoke. "Then let's tip the playing field... Given the probable power level of our unknown foe, I suggest we pull in those who might be of the greatest help to us... Those we've known the longest. Our job is to reawaken them" They started with Aquaman and Wonder Woman, then regrouped at the Empire State Building, where they figured out who the most likely culprit was. "Dr Destiny." Aquaman continued, "One of our oldest enemies. Master of the dream reality. My best guess is that we've been drawn into some scheme of his. Telepathic assault. Means we use a telepath to stop a telepath. Where's J'Onn?" Batman hadn't figured that one out yet, "through conventional means..."

During a skirmish with rioting Sparkers, the foursome was joined by Green Lantern and the Flash, with allusions made to the Magnificent Seven (for the first time in print?) Wally called dibs on Coburn, Kyle on Bronson. Aquaman again pointed out, "We're also missing the last Leaguer. The Martian Manhunter would be able to lift this dream-veil. Where could he be?" Kyle guessed, "Uhh, Mars? Shot in the dark." Superman had his own idea, and flew toward his intuition. Wally figured, "Take it J'Onn'll want to be Yul Brynner."

"Father, if you don't believe in offworlders, why do you stargaze?"
"Preparing for H'ronmeer. His prophesied plague will force us to find another sphere to call home. SACRED ONE... IT CANNOT BE!!"
"What is happening, my soul?!"
The very sky above Mars began to tear open, the blackness of space corrupted by sunlight and skies of blue. "The Coming! Go inside, both of you-- and pray! PRAY FOR OUR WORLD!!"
"Time to wake up, sleepyhead. A new day's dawning for the Ju--" Green Lantern attempted to declare, before being silenced by the more sensitive Last Son of Krypton. The stars continued to give way to the figures of the Justice League, as Superman gently informed, "You've been dreaming, J'Onn. You're not home on Mars. Not even close." Batman explained, "You were pulled to Earth in the 1950's... You're in an Air Force hangar at Roswell, J'Onn... and we've come to set you free."

"Then I must denounce that 'freedom' you offer-- GO AWAY." J'Onzz motioned to his wife, "Do not let our daughter cry. I will be but a moment." He continued arguing with the Batman, "You say this is not real? It is real enough. So long have I been here-- in a vaguely more human form.-- that you sometimes forget Earth is my adopted home. The Martian language has twelve words for 'husband'... fourteen for 'father'. Hearing their music again has been a siren's song." Batman pleaded, "J'Onn... they are an empty melody. Don't do this to yourself. I know too well the pain of losing family, but--"
"And what would you give to have them back?"
"Anything."
J'Onn returned to his family, gently pushing them in the opposite direction from the Justice League. "And everything."
His wife asked, "J'Onn, who--?"
"Echoes of friends I will miss... But I should never have known. Come along..."
Kyle Rayner sighed "Wow. I had no idea he was so alien."
Flash corrected, "You mean alienated--"

The Know Man had enlisted the best known Sparkers as a team to counter the Justice League, whom they caught up with at Roswell, to devastating results...
"That scream--! So horrifying, so-- inhuman." Superman's hearing had picked-up on a tragedy as yet unknown to his fellows. "THE FIRE! MARTIANS ARE VULNERABLE TO FIRE!"

For three silent panels, J'Onn J'Onzz cradled his dead wife and child in his arms, as he transformed from heartbroken natural form Martian to a wailing Manhunter.

Seemingly on the verge of tears, the Man of Steel explained, "All the smoke-- I've lost sight of him!"
"Wait, there he is," declared the Batman.
Kyle Rayner hoped he was okay. Wonder Woman asserted, "J'Onn is many things-- okay does not seem to be one of them."

From out of the flames, the Manhunter walked-- twisted by overwhelming agony and white hot anger-- "Who... Did... This? WHO!!"
"We did," Unity acknowledged, though his weary face betrayed the conviction of his words. "According to our master, you have awakened too soon. We're here to correct that."
"Then you fool yourselves. When this day is over-- each of your gods will know the meaning of a Justice League!"