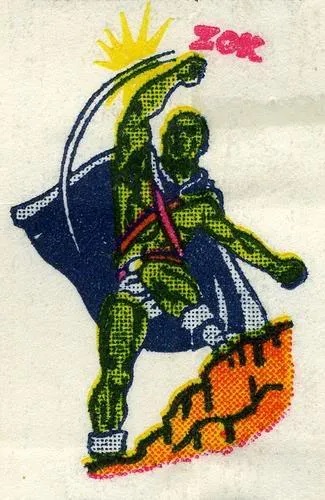 This is the most awesome thing in the history of words ending in “some!” You know how much awesome history that is? It includes the invention of the Charleston Chew and the polio vaccine, that’s how awesome it is! But most importantly, Fleer Justice League of America Gum & Tattoo packs from 1969 featuring rare Martian Manhunter licensing! For 1/100th of an American dollar, you could temporarily add J’onn J’onzz to any part of your suddenly more manly body! That’s a sum smaller than the Atom, another favorite Leaguer of mine who also gets his own rare merchandising! Sock it to me! Hawkman, Flash, and Green Arrow joined the DC Trinity here as well! My only regret is no Sea King for the Aquaman Shrine.

The art is from a panel in Justice League of America #71, cover dated May 1969, by Dick Dillon and Sid Greene. The "ZOK" is all tattoo, though.

Praise H’ronmeer for Dan Goodsell and his blog a sampler of things specifically the posting from Wednesday, August 16, 2006! Wrappers following, with more tomorrow...