The Vile Menagerie: THE MARSHAL of the RED BROTHERHOOD 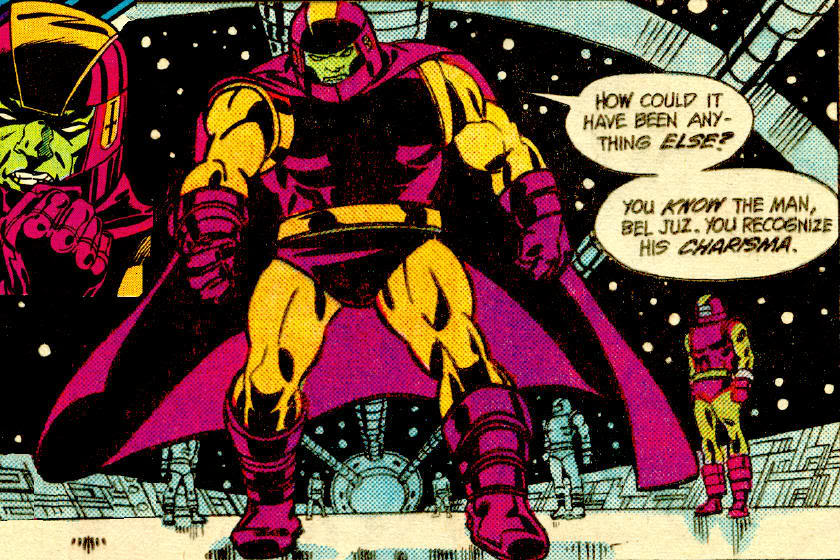 History:
As described by J'Onn J'Onzz...
"Life had been hard for my people on Mars II, particularly for the young. There have always been those who dreamed of returning to Mars...I did not know how many, or how strongly they craved a return to what was no more... He called himself The Marshal. I and the other Martian leaders had considered him a minor military figure, more ridiculous than threatening...I realized...how wrong we'd been. Genetically altered to be the perfect Martian warrior, the Marshal towered over his soldiers...a figure of tremendous charisma...Within a week, the Marshal took command of the government. Those who resisted were imprisoned--or killed. I chose to flee...to warn the Earth... I barely escaped in a scout ship...and the Marshal's hunters were soon after..."

Having convinced his troops that Earth was attempting to invade their abandoned home world of Mars with its NASA explorer probes, the Marshal's forces launched a counter attack on the third planet from star Sol. As part of the Martian assault on Earth, the Marshal launched the powerful android Challenger against the Justice League of America, and destroyed the United States' Explorer space shuttle as a show of power. Much of the Marshal's strategy came from an old enemy of the Manhunter's, the treacherous Bel Juz. "It was to protect myself from J'Onzz that I became The Marshal's lover...and encouraged his plan to take over the Martian government, and destroy J'Onzz and the other leaders. To protect myself, I started a war..." Bel Juz's maneuvering proved to be for naught, as the United Nations resisted the Martians' bid for power, and the JL of A destroyed Challenger. 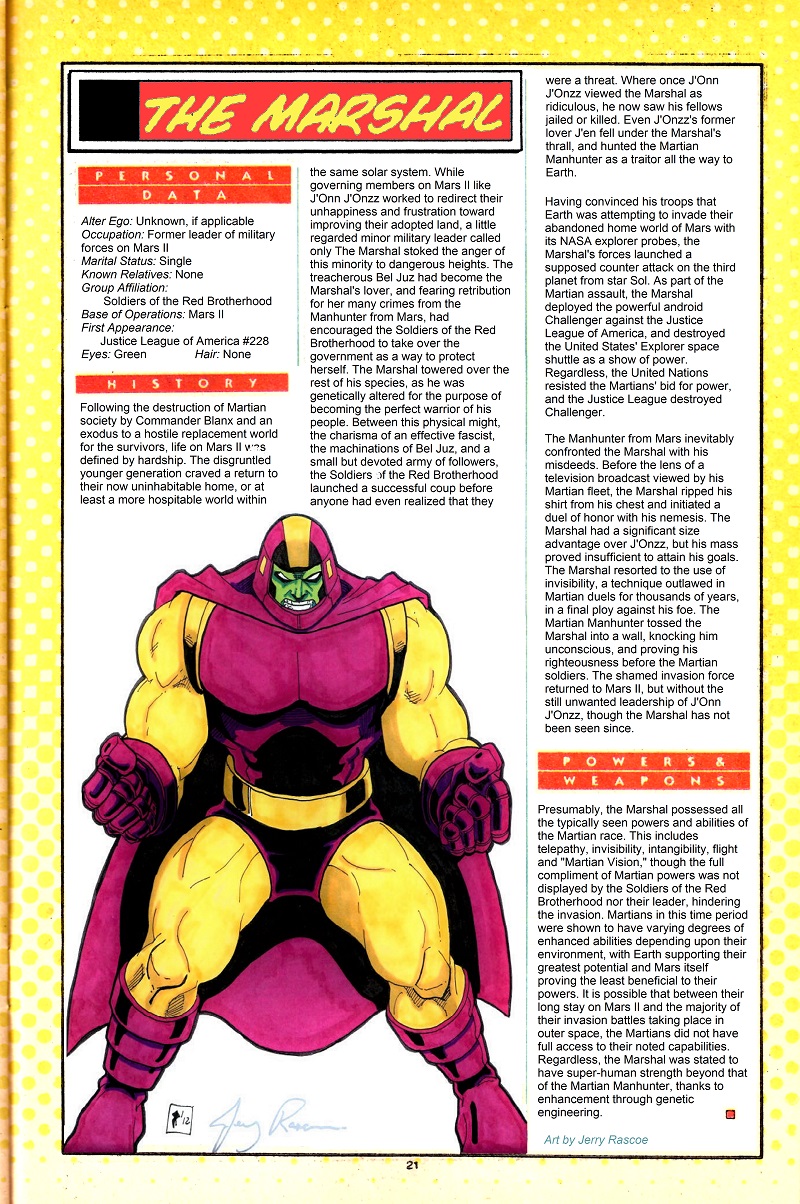 Martian Manhunter inevitably confronted the Marshal with his misdeeds. Before the lens of a television broadcast viewed by his Martian fleet, the Marshal ripped his shirt from his chest, and initiated a duel of honor with his nemesis. The Marshal had a significant size advantage over J'Onzz, but his mass proved insufficient to attain his goals. The Marshal resorted to the use of invisibility, a technique outlawed in Martian duels for thousands of years, in a final ploy against his foe. The Manhunter tossed the Marshal into a wall, knocking him unconscious, and proving his righteousness before the Martian soldiers. The invasion force returned to Mars II, and the Marshal has never been seen again. Retroactive DC history no longer supports this 1984 Martian invasion, although an attack by an unknown alien race has been mentioned. Somewhere, perhaps in a slightly altered form, the Marshal may be waiting for his chance at revenge...

Powers:
Presumably, the Marshal possesses all the powers and abilities of the Martian race. This includes telepathy, invisibility, intangibility, flight and "Martian Vision." His already super-human Martian strength is believed to be enhanced through genetic engineering.

Quote: "Here we languish, beggars on a hostile world far from our native sun. Forced to grub for survival like insects in the dark--when there are those who live in light, on a world that should be ours...While we huddle on this barren rock, our sacred lands are raped--by those who mock our fate!"