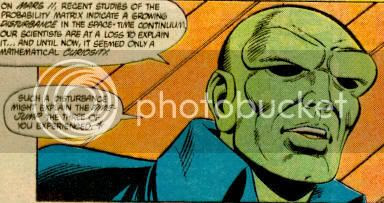 Vixen: Listened to Aquaman moan. Not like that. Disparaged by Hank Heywood Sr.

Aquaman: Moaned about his busted-up marriage, kingdom, and team to Vixen. Anxious when he learned Superman, Wonder Woman, and to a lesser degree Flash were back from whatever hole they'd crawled into, necessitating the League to work at half-strength during the Earth/Mars War.

Elongated Man & Sue Dibney: Alarm interrupted something that forced the pair up in their robes. Disparaged by Hank Heywood Sr.

Gypsy: Acknowledged as actual member of team living in the Bunker. Disparaged by Hank Heywood Sr.

Steel: Cried some more. Tossed Hank Heywood Sr. out a window. He was sensitive like that.

Zatanna and Martian Manhunter: The only other heroes to show up in costume and ready for action after Aquaman's alert that the missing founding Leaguers were spotted flying into the U.S.S.R.

J’Onn J’Onzz’s Nicknames of the Issue: None. He hardly appeared.

Most Embarrassing Vibe Quote of the Issue: "Amigo, if this was a test..."

Creators: Conway, Patton, and Mike Machlan let the old Leaguers get all the action, while the new tended to foreshadowing of upcoming issues.

Posted by Diabolu Frank at 4:20 PM

Steel: Cried some more. Tossed Hank Heywood Sr. out a window. He was sensitive like that.

I love the Heywood family. Love, love, love them. As I have said, all of their lives have sucked to one degree or another. This also features Steel's classic line of "And when I get angry, I want to smash stuff." Yeah, that and listen to Limb Bizkit, yo! Heh heh heh.

Sr.: Caught in an explosion. Caught in an implosion. Watches Firestorm come back from a brief first run to star in a 100 issue series, become young turk in the JLofA, Super Powers toy, multiple incarnations, etc. He instead gets a few brief appearances in Roy's books, suckered into jumping to Earth-1, and fails to become its only super-hero before Superman. Retires. Appears in Justice League Detroit as racist right-wing caricature. Gets drunk with Dale Gunn a half decade later. Finally comes out of retirement to be butchered among D-listers by Eclipso. Unmourned.

Jr.: Blowed up good in 'Nam, leaving bride and infant son. Actually dead, and not some POW waiting for Rambo or Braddock to rescue him. Wife makes an appearance in maybe one panel ever, so you know tragedy befell her early on.

III: Pretty much a Colossus proxy, with a hefty dose of Sunspot, mingling the juices of two of the least-liked or interesting muties in history. Becomes a cyborg in his late teens simply because grandpa was overprotective and he didn't really have spine enough to stand up to him. Lives the rest of his existence in agonizing pain. Joins Justice League Detroit and becomes the best friend of the most embarrassing Leaguer of all time. Rippe to literal shreds by one of Professor Ivo's androids in brutal fashion-- the sort of threat the lamest rookie heroes normally hurdle with ease. Vegetatative husk drug out of suspended animation and re-killed by Despero. Unmourned.

Citizen Steel: Besides the usual trauma inherent in becoming a Heywood Steel, including the Sword of Damocles hanging over one's head, this new hero's defining contribution to comics will likely remain having a widely discussed if mostly unspectacular semi-erection on his debut cover. Inglorious death to follow in a little heralded, self-contained story arc in a soon-to-be-cancelled series.