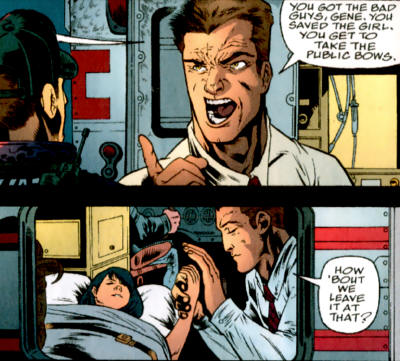 In the Dakota Badlands of 1877, U.S. Calvary soldier Abel Carmody rescued the granddaughter of an American Indian shaman who gave his life to contain a demoniac hoard. Carmody eventually married the girl, become a great industrialist, and constructed the fortress "Carmody’s Folly" in preparation for another terrifying assault.

In the present, the Martian Manhunter ripped the back door of a suburban Denver home off its hinges with his bare hands. “As his name implies, he’s not from around here. But on his adopted homeworld, as on his planet of birth, J’Onn J’Onzz is a policeman. He swore an oath to protect the innocent. Moments like this, there’s nothing he’d rather do.” As he entered a den surrounded by police, the Manhunter began to assume a form more suited to the setting. He stepped over a young man unconscious on the floor to scoop up a frightened schoolgirl into his arms. “Hi, Ellie. I’m Detective Jones. You’re safe now. Everything’s going to be okay.” At that moment, a SWAT team burst onto the scene. 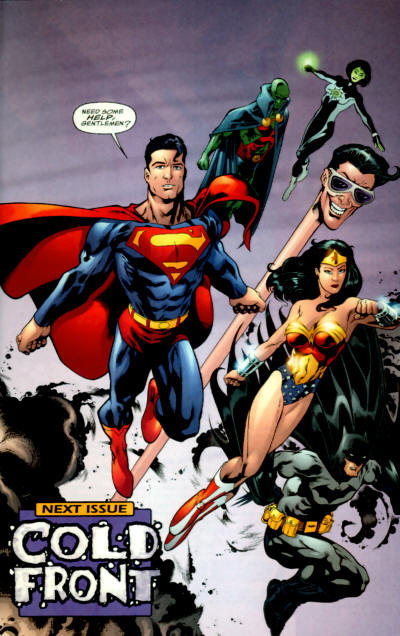 “Jones! What the hell are you doing here?!”
“What does it look like, Gene?”
“Watch the mouth, pal. You got no badge anymore, you got no right to be here!”
“Just doing my duty as a citizen, Lieutenant.”
“We had the situation under control--!”
“No—you were ready to start a war. In that kind of a cross-fire, what chance do you think the girl would have had? You got the bad guys, Gene. You saved the girl. You get to take the public bows. How ‘bout we leave it at that?”

Meanwhile, Green Lantern Kyle Rayner, his girlfriend Jade, the Flash, and his wife Linda had taken to the Spirit Lake Resort for a vacation. Also at the resort were Kishana Lewis and three fellow forest service fire fighters, who were called out by resort manager William Hume to insure that there would be no sparks lit under the hot summer sun. Within hours, Lewis had made a fire, and left her men to burn in it. Smoke over the south ridge had alerted Flash and Green Lantern, where they found Lewis in shock and rambling. Clearing the flames, the heroes were attacked by the possessed bodies of the firemen, whose supernatural abilities allowed them to circumvent the Leaguers’ powers. The firemen spontaneously combusted just as the dual titans were ready to collapse. Additional Leaguers Superman, Batman, Wonder Woman, Plastic Man, and the Martian Manhunter were likely called to the western Badlands by Jade, who joined them in discovering Flash and Green Lantern unconscious.