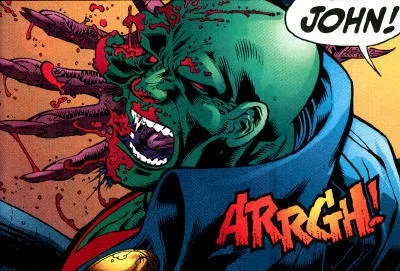 Wonder Woman fared worse than Superman against the sinister entities. Diana was infected with a disorder that caused her to slowly turn into a demonic version of herself, then frozen inside a lake. It required most of the League's powers combined to release the Amazing Amazon from her trap, as everyone returned to the resort built around Carmody’s Folly to regroup.

During this quiet before the storm, Linda Park expressed discomfort around J’Onzz to her husband, Wally West...
“I know he’s your friend...”
“Tell me about it. Sometimes he spooks me, too.”
“It’s the telepathy. Intellectually, I know he doesn’t pry, but every time J’Onn is around... I feel like I’m naked. Transparent clear down to the soul.”
“But think about him. All those years living among us... and no matter how much he blends, he’s still an alien.”

J’Onzz made a second attempt at learning about the demons through Kishana Lewis’ mind, and was pleasantly surprised she still had no problem with his appearance. J'Onzz found her to be “Intuitive and brave. I like that.” Kishana responded, “Don’t be fooled, it’s mostly an act.” J’Onzz insisted, “I’m not. And it isn’t.” The Manhunter found a “memory” of the aftermath of the 1877 incident imprinted on Kishana’s genome, as she heard “Medicine drums, on the wind. A song of power.” Martian Manhunter also determined that though Lewis’ physiognomy was mainly African, her heritage was still definitely mixed. "Does the name Abel Carmody mean anything to you?"

The Alien Atlas and Kishana Lewis were attacked by a tentacle monster, but it was the progressively worse Wonder Woman's claws that tore open Manhunter’s face, as she swung wildly in the pair's defense. Kishana was concerned. “C’mon Manhunter, let’s get you—“
“My fate doesn’t matter! It is you they want!” Armed with an M-16, Lewis held her own, and vowed, “Those monsters slaughtered my team... Whatever you want of me, you got.”

Manhunter grimly warned, “Have a care Kishana. Before this struggle ends, we may well hold you to that pledge. And it will likely cost you more dearly than you can possibly imagine.”

Posted by Diabolu Frank at 6:00 PM

You have really great taste on catch article titles, even when you are not interested in this topic you push to read it

You have really great taste on catch article titles, even when you are not interested in this topic you push to read it