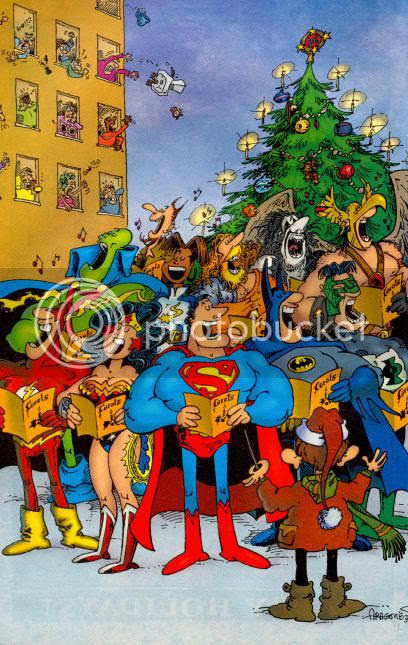 Martian Manhunter never got much play in the DC holiday specials, probably because H'ronmeer never came up any any terrestrial testament I know of. Barring some sort of Wookie Life Day nonsense, or maybe helping Bloodwynd celebrate Kwanzaa, you're looking at a pretty lousy fit. Sergio Aragonés came up with a nice workaround through the less committal caroling. Seemingly very poor caroling, as I imagine the voice of David Ogden Stiers bellowing into the night. Seems a shame DC had to bring in a heroine from the 30th Century to represent people of terrestrial color, though.

After raking Alex Ross over the coals yesterday for his 70's hang-ups, its now time for a piece of the inherently superior 80's nostalgia I lived through, seeing as the Detroit League should still have some focus as part of the 12 Days Of Christm-- er, CRISIS! Keith Giffen's madman creation Ambush Bug, after a sort of "Red Skies" moment involving Dead Hukkas (don't ask,) needed help finding his stuffed sidekick (I mean it,) who had become a cannibal doll eater (just let it roll over you, already.) It seems the Crisis on Infinite Earths body count had gotten so high poor Jonni DC, Continuity Cop was backed up into the new year. While digging up the fallen's graves to confirm death, Cheeks the Toy Wonder had become a sort of zombie through contact with an irradiated bulldozer from Three Mile Island. Panicked, daddy Ambush Bug began calling all the super-teams he knew, including the Titans, the Legion, the Outsiders, and a certain Detroit based breakdancing outfit...

Don't feel bad, Paco. He hung up on Metamorpho as well. Wait, do feel bad.

Imagine, not only the pure hatred and strength it took to rip that sink from the wall, but to carry it to the window and heave out at great distance.
Sign em up!

With the clip Luke provided at his comic bunker, it would appear that Martian has quite a lovely voice.

There's only so much he can do though, with freakin Lobo and Hawkman to compete with.