For the 100th post emitted from the Idol-Head blog, it only makes sense to spotlight the 100th issue of our star's solo comic! Sort of. 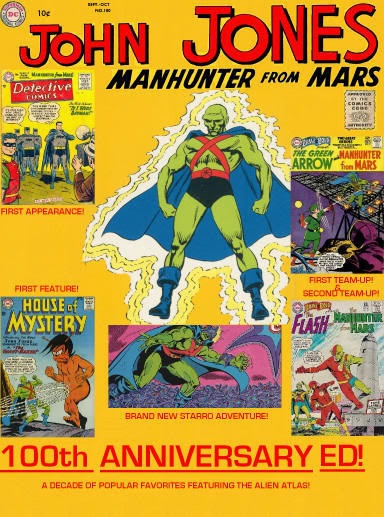 The Making of "John Jones: Manhunter From Mars #100"

Tumultuous times had wide reaching and generally adverse effects on the creators behind the J'onn J'onzz comics. Longtime editor Jack Schiff retired to political activism. His replacement, George Kashdan, was let go ostensibly for under performing books, but more likely company politics that looked poorly on his support for the failed writers union. One of its members, Manhunter scribe Jack Miller, developed cancer. Dell/Western was still enough of a force to lure dedicated artist Joe Certa to greener pastures. DC's fortunes as a company were foundering as well, thanks to the rise of Marvel Comics. The winds of change were blowing, and they whispered the name of artist-turned-editorial director Carmine Infantino. While fellow artist Joe Orlando was assigned to renovate the House of Mystery back to its former glory as an EC imitator, thereby evicting tenant J'onn J'onzz, it was still felt the old boy had better days ahead of him. Seeing as the character had already passed as an "action hero" in his police and more recent super-spy days, it only made sense to toss him toward former Charlton Comics editor Dick Giordano.

Like Marvel's "Captain America #100," the new series would start at a fictional anniversary point (never mind his "decade" milestone ran nearly as late as Image Comics'.) Leaning on crudely re-edited milestone stories was less a sentimental nod than a necessity, as the book was rushed into production to insure the Manhunter from Mars wouldn't be forgotten in the months following his HoM run. A new short story was a bit of a Charlton reunion, as Giordano turned to old pals Denny O'Neil and Jim Aparo for the eight-pager. The tale was a forgettable return for Starro, who in a scant few years had gone from the first Justice League threat to solo Manhunter fodder before Aquaman took him by his lonesome in the 70s. You could tell O'Neil wasn't feeling it, and likely regretted not using his old Sergius O’Shaugnessy nom de plume while moonlighting in-house on his usual editor, Julie Schwartz. Aparo fared better, although the story was essentially a paycheck until he took over the art chores on Aquaman, his first issue ironically seeing print a month or so prior to this. Even Giordano proved only a placeholder, as his time at DC was short on the first go-around after being wooed by Continuity Studios (though the connection paid off years later with Neal Adams protege Mike Netzer's run on our book.)

Within a few months things were about the same as they ever were. Giordano and O'Neil had been working with Mike Sekowsky on Wonder Woman, an artist himself turned editor, eventually on the Manhunter feature. Mutual friendships had already yielded this issue's Wally Wood cover centerpiece (clearly swiping from Joe Certa, but Woody never was one to let a perfectly good pose go to waste.) Following Giordano's example, Sekowsky took advantage of his position to kick old Tower Comics associates work. Sadly, no Gil Kane or Steve Ditko runs came out of the deal, but Reed Crandall’s issues and the tragically brief John Giunta period made up for that plenty well. Also, just compare my upcoming glowing reviews for Len Brown’s scripts to Jack Miller’s, and it becomes clear what a major turning point #100 was for the Manhunter!
Posted by Diabolu Frank at 12:00 AM

Labels: Fanatical Fictions, Martian Manhunter, The Rock of the JLA

You had me going for a minute there, my man. Imaginary Stories, indeed!

Above my door is a tin sign in which Superman carries a banner bearing the word "verisimilitude."


Well okay, I know a guy who does.


Richard Donner is the guy.