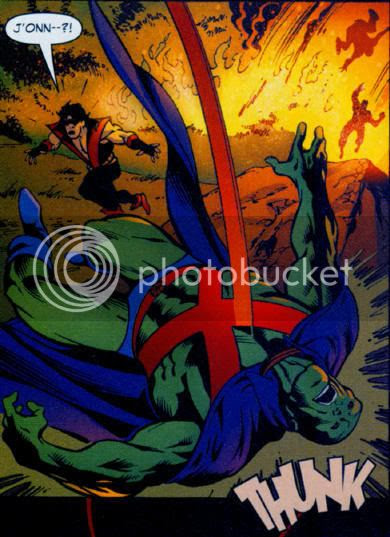 Vixen: Absolutely took charge, using her powers to sense changes in the fire’s path and repeatedly guide her teammates away from immolation. She’s so impressive she rated a two-page origin recap and...

Gypsy: Ran enough that she should start thinking really hard about investing in some kind of footwear. Flip-flops? Clogs? Something?

Vibe: Still doesn’t get what the big deal with the Taco Bell chihuahua was. Partly because he was dead by then. Also admired Gypsy, if by admire you mean wanted to sex up.

Martian Manhunter: Made Professor Xavier look like a physical dynamo by comparison. “You’re the only member I don’t worry about, Vixen. My body’s gone inert, but my mind hasn’t. I still hear your secret thoughts. For all of you to survive the JLA, I have to train you—and to train you, I have to know you, better than you know yourselves. I have no doubts about you, Mari. You’ve applied yourself to your gift. If there’s a way to succeed, you’ll find it. But Steel has become almost artificial, inside his artificial body -- he deadens the pain of his life -- Vibe thinks life is a wide-screen movie. He’s careless, cocky... and Gypsy -- I can’t get a handle on yet. She thinks in her Gypsy language -- “

Dale Gunn: Clearly not even piloting the L.O.S.T, because...

Aquaman: Piloted a L.O.S.T. over the inferno, then dove off into a nearby stream. “This is the glory of the Justice League—that a man with only water powers flies through the air to a fire! The team makes all of us more than we are alone! And that’s why I wanted to be its leader! I could have settled for King of the Sea, three-fourths of the planet—but leader of the Justice League means more!” Later, Arthur commanded a local trout to bob its head out of the water and discuss the sweep of the blaze. I swear, Jack Miller had nothing to do with this. Aquaman made his way to the team’s abandoned campsite. “Damn J’Onn for breaking all contact!” Feeling like stir fry, Aquaman dumped a pot of leftover--and quite hot-- water over his head. No, Dave Wood didn’t have a hand in it, either, regardless of Manhunter’s utter impotence to fire, lame theme villains, and the left-of-center circumstances. Trapped and parched, Aquaman found the burial mound of the Royal Flush members, noting blood has almost the same composition as sea water and smearing himself in it.

The Creators: See, no clear Silver Age analogue for that, nor even Steve Englehart’s old Bronze Age scripts. Meanwhile, perhaps pained as I was by Jerry Ordway’s over-embellishing on the covers, Tom Derenick channelled his inner Zeck to look more like the real thing than Mike himself did. On Aquaman, it took especially well.

Most Embarrassing Vibe Quote of the Issue: “You don’ haveta be so elusive wit’ us, chica!”
Posted by Diabolu Frank at 12:00 AM