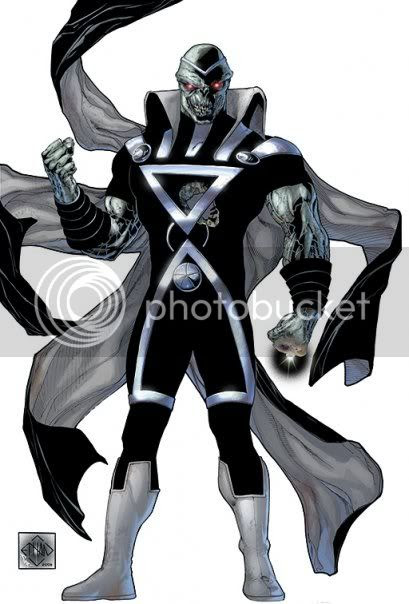 Folks have asked me a few times about my feelings regarding the Manhunter from Mars becoming an evil, hateful, undead killing machine. It seems to come as a surprise that I don't mind at all. For starters, zombies are my favorite and most feared monsters in the whole world. The Blackest Night variety favor a cross between the seriousness of Romero and cruel taunts/scheming of Raimi, two of my best loved varieties, as opposed to the also enjoyable Jackson/O'Bannon sort from Marvel Zombies. The suit designed by Van Sciver is (only somewhat) surprisingly similar to some redesigns I attempted back in the day for the Alien Atlas, and the ghostly pallor is much easier to accessorize for. The much-loved folded collar and pie symbol are back, the dopey wrist gauntlets join them, but only the Luke Cage: Hero For Hire headband* really looks out of place. It's a sharp design, and Manhunter has rarely been so prominent in a crossover, even if he is a bad guy.

On that note, it's become more and more clear that this guy isn't J'Onn J'Onzz, so any shenanigans he gets up to don't count in the same was as, say, Hal Jordan as Parallax, or the latest Superman meltdown. This is a reanimated corpse controlled by Nekron, not even that regressive-evil-gene nonsense from Trial By Fire, which still ended with J'Onn blasting his ancestor/evil self Fernus to oblivion. If there's no soul, there's no strike.

The thing about Blackest Night is that it's pretty good, and it's written by justifiable fan-favorite Geoff Johns. Aside from editorial cluster-messes like Infinite Crisis, Johns is quite reliable, and more to the point, fairly predictable. Too many big names have already died in this crossover, and as Johns is a gent about servicing the wants of fandom, you just know a bunch of these guys will return to life and new found glory before all is said and done. It is possible, though longish odds and too soon by my measure, that a resurrected Martian Manhunter may soon be returned to us.

This gets to one of my main purposes for constructing the old Rock of the JLA site, nevermind this blog: Building a better J'Onn J'Onzz. Fans and creators alike (myself included) were largely ignorant about the character's origins, history, rogue's gallery, and so forth in 1999. I always intended to help change that, and continue to strive toward a richer and more informed approach to the character. I see the Frankenstein's Monster above as the end of bad old habits regarding the Martian Marvel, and a hope for an improved model to come. We all now have access to cheap reprints of Martian Manhunter's first fifteen years of publishing, through his solo strip and Justice League of America. I've tried to cover most of the years in between Showcase Presents and the modern interpretation of the hero that began in 1987 with Justice League International. I've also tried to shine a light on hidden gems to the present, and will endeavor to continue, as there is so much more to offer. The point being, to anyone offended by Black Lantern Martian Manhunter, give some consideration to where to go from here, and how to insure we never endure a disposable J'Onn J'Onzz again.

Anyway, a negative and bisected version of the above image was used as a teaser ad for Blackest Night. A full color version was seen on the convention circuit this year, but this smallish jpeg is all I can find on the internet. If anyone can direct me to a higher resolution option, I'm all ears!

At least J'Onn Z'Ombie doesn't have a conehead.

Hey, Idol Head! The headband thing is carried over from the Black Hand design, indicating that Black Hand wears, accidentally perhaps, a primitive version of the Black Lantern uniform. All of my BL designs have that headband thing, even Firestorm! (Sort of.)

EVS, I remember reading (at Newsarama?) about the deep thought you put into the BL designs. I should have mentioned that nifty "hand" cape most just take for torn, and should probably try to dig up that interview/column and link to it here. Point being, even the gauntlets look good in context (and I'll try to keep overlooking the tiara. :) Nice job!

Let me also say I dug your classic MM in the too brief Superman/Batman stint (what, no Zook from you?) and you were probably the best (re: only) artist (afflicted) with drawing the "conehead/pickle/Skrull" redesign. Thanks for your comments, and thanks for fixing J'Onn's brainpan!

I was going to say the headband was a nod to the Black Hand costume, but *THE* EVS beat me to it.

I hadn't thought of the ripped cape as representing a hand before. I had just assumed it was to represent a fractured version of the original J'onn. Coolness.

And, repeat after me, Frank:

As I mentioned before, This is one of the most badass J'onn images in recent memory.