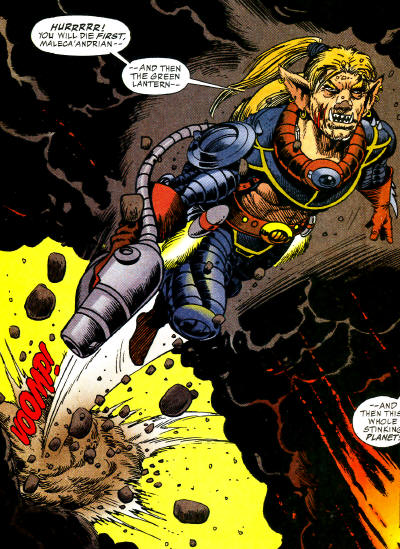 History:
The planet Zapher had enslaved Tybalt Bak'sar's people, so he destroyed it. Eight billion inhabitants perished in an instant, including a billion of Bak'sar's own. "Better the grave than chains." Green Lantern Abin Sur prevented Tybalt Bak'sar from committing suicide, then took him into custody, earning his eternal hatred. The Guardians of the Universe sentenced Bak'sar to life in prison for his genocidal act. Unrepentant, Bak'sar swore that he would return to kill all of his enemies.

After an indefinite period of incarceration, Bak'sar was visited in his cell by an emissary of the Weaponers of Qward, foes of the Guardians from the Antimatter Universe. The emissary offered to aid and outfit Bak'sar in return for his acting as an agent of destruction against Oa and the Green Lantern Corps. Accepting, Tybalt Bak'sar was taken to Qward.

Some time later, Tybalt Bak'sar pursued Green Lantern Abin Sur to Denver, Colorado. Bak'sar intended on exploiting the Corps' vulnerability to yellow energy and slaying his former captor. Their battle attracted the attention of the Manhunter from Mars, who attempted to break up the combatants. Though Bak'sar fired on the Martian Manhunter without provocation, J'Onn J'Onzz's racial distrust of the Corps clouded his judgment, and he lashed out at Abin Sur and Tybalt Bak'sar equally. From conversation, Tybalt Bak'sar learned of the the existence of Alan Scott, a non-corpsman Green Lantern. Stating his intention to kill Scott, regardless of affiliation, Tybalt Bak'sar irked Martian Manhunter. Though direct attacks were useless against an immaterial Martian, Bak'sar made use of his knowledge of the Maleca'andrian weakness to open flames. Disregarding his own safety, Abin Sur spirited J'Onn J'Onzz away in a ring construct, until his concentration was shattered.

Tybalt Bak'sar practiced extraordinary rendition on Sur in hopes of clearing a path toward Green Lantern Alan Scott. Threatening the lives of the Lanterns and Earth itself, Bak'sar provoked the recovered Martian Manhunter. Finally working with the Green Lantern, Martian Manhunter managed to outmaneuver and disarm Bak'sar. J'Onn J'Onzz saw the error in his prejudice, and made peace with Abin Sur. Tybalt Bak'sar, stripped naked and carted back to Oan justice, swore he would one day slay them both.

Powers:
Tybalt Bak'sar is possessed of strength and durability far beyond that of a human, though its full extent is unrevealed. Based on threats made to his enemies, Bak'sar may be rather long lived. "I will see you both dead if it takes a hundred thousand years."

Personality:
Though he swaggers with the confidence of a zealot, Tybalt Bak'sar is utterly without regard for life of any kind. Consumed with rage, Bak'sar seeks the deaths of any who oppose him, and is implacable in his pursuit.

Weapons:
Outfitted by the Weaponers of Qward, Tybalt Bak'sar makes use of a handgun whose lasers can penetrate Green Lantern power ring constructs. He can fly via a floating platform and belt jets. He wears resilient body armor, and carries powerful grenades.

Quote: "Zaphers enslaved my people. From greatest to smallest, they benefitted from the misery of others. They deserved what they got."

Created by John Ostrander and Timothy Truman
Posted by Diabolu Frank at 11:15 PM

For some reason Tybalt strikes me as a late Silver Age/early Bronze Age Avengers badguy. Something Roy Thomas would have concocted. I meant this in a good way... a midlevel badguy whom the Manhunter could throw down with in a good brawl every couple of years.

Yeah, I see where you're coming from. He's no Man-Ape, though.