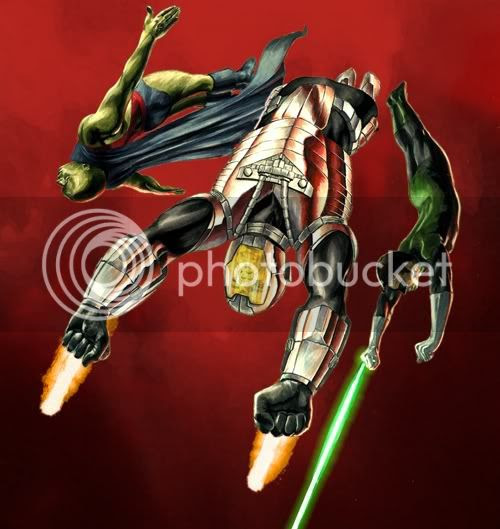 Technocrat was a member of the 1990s Outsiders team who is probably best remembered for getting drawn by Travis Charest on that one cover (of two!) He somehow managed to appear in the final issue of Infinite Crisis without getting killed, and as a fan of New Bloods and Pantha alike, my soul weeps at the injustice. The Martian Manhunter and Green Lantern Hal Jordan randomly appear on this card, even though Jordan was likely on his way to mass murder and Bloodwynd might have still been in play contemporaneous with the Technocrat age of comics. Let's pretend Geoffrey Barron was an alias for Dale Gunn so I can legitimize the time out of my life spent discussing Technocrat in some small way.
Posted by Diabolu Frank at 12:00 AM

Those are some pretty cool poses right there. Always nice to see artists take some risks with camera angles, too.