The Vile Menagerie: TOR, the ROBOT CRIMINAL of MARS 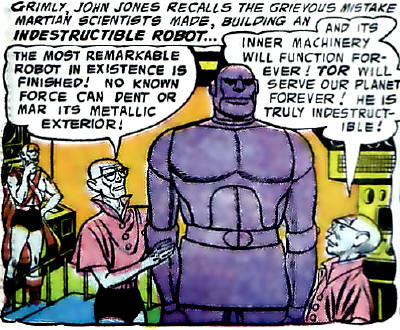 History:
Martian scientists, among them J'onn J'onzz, constructed a nigh indestructible robot of vast strength and intellect to serve their planet "forever." J'onzz was apprehensive about the result, and rightly so, when a fellow scientist accidentally fed a master criminal thought-control card into the TOR control board. TOR's mechanical brain quickly absorbed its crime facts via a remote electronic connection, and the robot began to function as a violent criminal. TOR proceeded to ravage Mars, its appetite for material possessions and the general rule implacable. Unable to reason with TOR or damage it with Martian weapons, J'onn J'onzz devised a plan to use the robot's greed against it. TOR was lured onto a rocket ship with the false rumor of riches within, and blasted off to the dead planet of Turas. 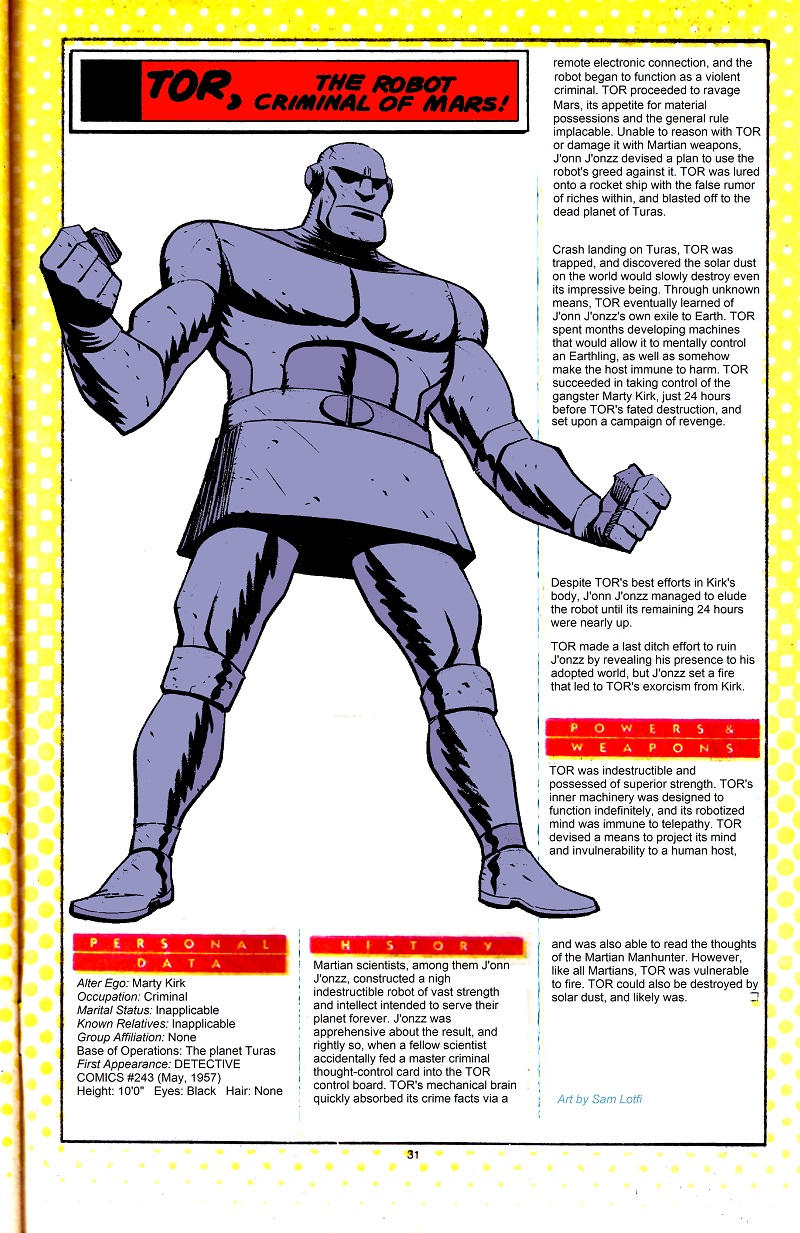 Crash landing on Turas, TOR was trapped, and discovered the solar dust on the world would slowly destroy even its impressive being. Through unknown means, TOR eventually learned of J'onn J'onzz's own exile to Earth. TOR spent months developing machines that would allow it to mentally control an Earthling, as well as somehow make the host immune to harm. TOR succeeded in taking control of the gangster Marty Kirk, just 24 hours before TOR's fated destruction, and set upon a campaign of revenge. Despite TOR's best efforts in Kirk's body, J'onn J'onzz managed to elude the robot until its remaining 24 hours were nearly up. TOR made a last ditch effort to ruin J'onzz by revealing his presence to his adopted world, but J'onzz set a fire that led to TOR's exorcism from Kirk.

Powers & Weapons:
According to the Martian scientists that created him, Tor was indestructible. "No known force can dent or mar his metallic exterior!" Tor's inner machinery was designed to function indefinitely, and its robotized mind was immune to telepathy. TOR devised a means to project its mind and invulnerability to a human host, and was also able to read the thoughts of the Martian Manhunter. However, like all Martians, TOR was vulnerable to fire. TOR could also be destroyed solar dust, and likely was.

Quote: "J'onzz, the moment for my vengeance is at hand!"