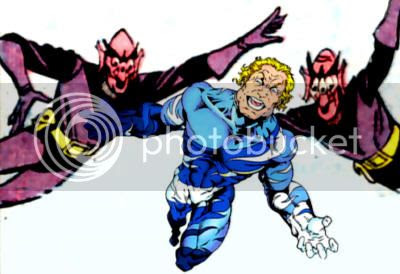 Bio: Thantos is an other-dimensional thief seeking to find the necessary means to stay on Earth permanently for his evil ends.

Bio: Thanatos was a being trapped in the other-dimensional "Netherspace" by powerful entities called "The Others" until he could prove himself evil enough to be returned to plague reality. Thanatos could temporarily access Earth when victims gazed into a magical mirror that mesmerized them. Thanatos could then assume their form and walk the Earth for a time, committing evil acts. Upon encountering Aquaman, Thanatos chose him as the template for a permanent form. When Aquaman's wife was in the grip of madness after the death of her first son, Mera was lured into the Netherspace, where she gave birth to a second ill-fated child. Aquaman eventually ended up in Netherspace himself for a time, and while imprisoned there Thanatos was freed and assumed Aquaman's identity. Shortly after declaring war on the surface world, Thanatos was murdered by Major Disaster, who had been contracted to assassinate Aquaman. 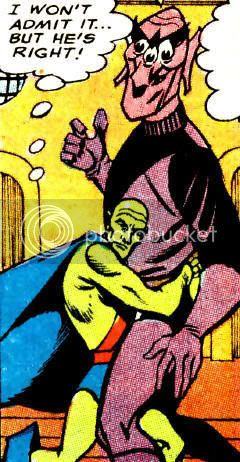 Idol Speculation:
Here's something we haven't seen much of so far-- a Martian Manhunter foe who really is quite similar to a better known rogue from another hero's gallery, but the Vile Menagerie member is the older, more powerful, and less derivative of the two. If only Thantos had made a few more appearances, or had any commercial value, this really would have been the complete opposite of the norm around here. Of course, I did have to go fishing into Aquaman villains, which is a notoriously shallow pool to draw from. I can't believe Peter David not only killed this guy early in his run, but did so in such an arbitrary and frankly stupid fashion. Anyway, while I think Thanatos would hold up for a while, especially in Netherspace, the 3-In-1 Man simply bowls his over with superior abilities and a lack of compunction in using them. Hell, I think Thantos might even like Netherspace, and would certainly use it as a stepping stone to Earth.
Posted by Diabolu Frank at 12:00 AM

Thantos would emerge triumphant as he is more powerful than the Aquaman challenger.

I was wondering why there would be two minor characters with such similar (Greek-sounding) names so I had to look it up. "Thanatos" was the Greek personification of Death.

Sometimes I just sit back and marvel at the education that Silver Age comic book writers must have received in their school days. Considering this was the print age, and all that knowledge had to come from a book, that means they must've been reading something besides comics. I always thought if a few modern day comic book writers spent a semester at a community college taking a few credits of gen ed courses, we'd see some richer stories and maybe some fresh ideas. Or, at the very least, at least some literary allusions here and there. Sure would beat the formulaic, rehashed storylines we see today.

It wouldn't be so bad if today's writers just read comics. That's how the Bronze Age happened. No, today's writers all watch the same TV shows/movies and just try to do that. I just wish more of them watched Mad Men instead of Lost. My bar is not that high, but they still just crawl under it.