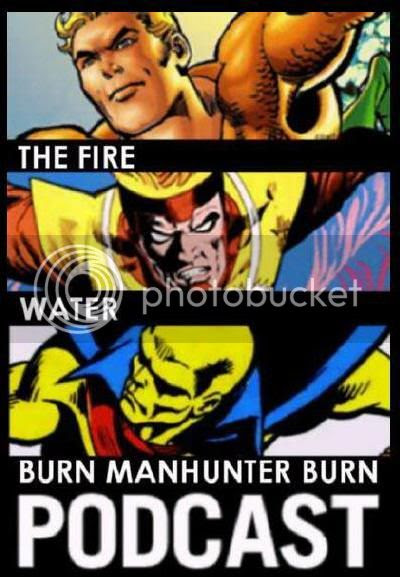 In September of 2011, Rob Kelly of The Aquaman Shrine and Shag Matthews of Firestorm Fan teamed-up for The Fire and Water Podcast, a weekly program available through iTunes discussing the heroes of their respective blogs and comics in general. To celebrate their fiftieth podcast, the guys decided to scare away their entire audience by inviting me as a guest to discuss a series of comics. Across more than 4½ hours we tackle greater than 100 giant pages of material from the DC Sampler, a free promotional comic spanning three issues from 1983-1985. We pretty much review DC's entire line across a three year span, and we don't finishing until the rooster crows! For extra punchy nerdistry, it can't should be beaten!

You can find the 50th anniversary spectacular episode of THE FIRE AND WATER PODCAST on iTunes. While you’re there, please drop the guys a review on the iTunes page. Every comment helps! Alternatively, you may download the podcast by right-clicking here, choosing “Save Target/Link As”, and selecting a location on your computer to save the file (128 MB).

I also recommend trying "back issues" of the podcast, and offer a linklist below:

Posted by Diabolu Frank at 4:24 AM

Terrific job, Frank! Rob and Shag have been phoning it in for too long; it's nice that you came in and carried them for this special episode!

(I'm trying to think of a TV analogy where a guest star entered the series in after the first season or two and became the star, completely taking over the series from that point on. I'm sure it happened, but I can't think of an example because my mind is still soaking in ether after last night's episode.)

I still think there's a better Outsiders lineup available. I also think Batman founding The Outsiders as his secret anti-Justice League team would be more interesting than either Batman hiding a Kryptonite ring and other protocols to take out the Leaguers, and Amanda Waller creating the JLA while realistically believing Catwoman, Vibe and Stargirl could hold their own against any of the Big Leaguers.

Glad you made another appearance, Frank! As soon as I set aside some time I'll be listening to this, and giving them a positive review.

Good times all around! I could listen to you guys discuss DC comics history for hours. I guess I just did :)

Count Drunkula, you just dubbed me the Steve Urkel of the Fire & Water Podcast. Thanks so much for that. Really. I totally don't wish you to fall asleep and choke on your own vomit or anything.

Frank - Thanks for the shout-out and appearing on the show! It was truly an experience (one I hope will fade with old age and senility)!

And be nice to Count Drunkula, he makes with the funny action figure pics!

In all seriousness, thanks for the shout-out! Much appreciated!