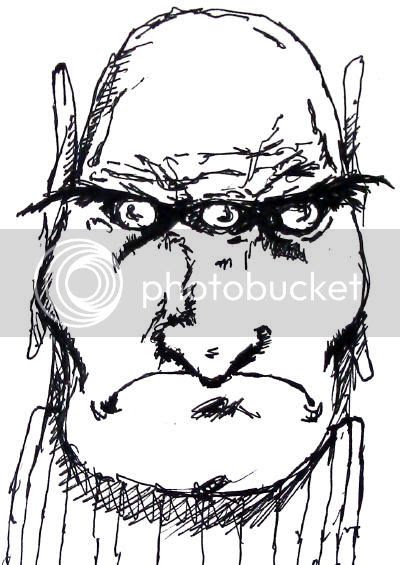 Put quite simply, this blog wouldn't exist without the Ill Mac. See, while I'd been acquainted with and had some small affection for the Martian Manhunter dating back to the mid-eighties, I didn't become a true fan until I saw Jeff Johnson's splash page in 1996's Justice League: A Midsummer's Nightmare #2 (not to mention the story surrounding it.) This fueled a strong new interest in a familiar character with a long but obscure history. At around the same time, I went from running a small comic shop to working at a less small one. A couple of teenage brothers had been shopping at the former, moved to the latter after my departure, and were happy to see their old comic guy again. I'd been playing the Overpower collectible card game with another customer that made the switch with me, and the boys lived in the same apartment complex I did, so we ended up starting our own games. When the boys bought a WebTV, I got invited over to explore the internet for damned near the first time. I set up my earliest email account through it, and my first suggested search subject was "Wonder Woman" (then my #1 favorite hero.) We found a fair number of Amazing Amazon fan sites (including one involving some fetishistic cosplay-- heavens to Betsy!) A follow-up subject was my recent fascination, the Alien Atlas, but we found bupkis. The ancient, awful Martian Manhunter FAN PAGE wasn't even around yet. I vowed then that, if I ever got a WebTV of my own, I would build the first fan site for the Sleuth from Outer Space!

I did finally get my own internet, although I had to piggyback it on the shop's phone lines. I even had to buy a TV to use the WebTV. By that point, there were a couple of fan sites, one quite good in its time but long defunct. I abandoned the promise for a while, but still dug the Martian Manhunter, and talked him up on message boards. I got tired of retyping the same arguments over and over again on versus threads, so I looked into creating a repository for all my comic book wisdom, but it morphed into Z'onn Z'orr: Home of the Martian Manhunter, and later J'Onn J'Onzz: The Rock of the JLA. In those days, “Illegal Machine” jumped into plenty of flame wars with me, and when he graduated to a real computer, he was responsible for the vast majority of the scans featured on the site. The Ill Mac even contributed some Photo Shop collages and other odds and sods. Years later, when I decided to turn the basics of the web site into a daily blog in emulation of The Aquaman Shrine, Ill Mac took all of the early photos and did more tweaks besides. You can see some of his efforts here, here, here and here, but I'm sure there's more random, unattributed examples I couldn't readily find.

Anyway, “Illegal Machine” was working very late one night at the sort of job where one should expect to clock out by 5 p.m., not 5 a.m. During some downtime, he called me up while I was shopping at Krogers to ask me for a subject to draw. I didn't understand what he was bugging me for, since if he wanted to doodle, he should just do his favorite hero Iron Man. He explained that he either needed to unwind or stay awake or something, and since he knew the blog was full of weird ass characters, he wanted something kooky and challenging to engage him. I thought about it for a moment, and figured Thantos the 3-In-1 Man was his best bet. Illegal Machine complained a bit about trying to figure out how to make Thantos' face work, but had fun doping it out, and even protested my posting this piece because he wanted to try again. For a doodle knocked out on work stationary with an ink pen more than a dozen hours into his day, I think the kid did alright. The Ill Mac has been a best friend for nearly twenty years now, and put up with far more crap from me and my mad crusades than I can ever repay. It's pretty cool that I can still scam a free commission out of him.
Posted by Diabolu Frank at 2:37 AM

Sweet! It's creepy and unsettling, and that really works. I love the line quality--there's kind of a nervous energy throughout.

Ahh, WebTV. I remember fondly the early days of AOL in the mid-nineties. Good times. Too bad I wasn't into comics then. I wonder what "Keyword: DC Comics" would have brought up.

Also, thanks for spotlighting Midsummer's Nightmare. I'm looking for some older stuff to re-read (since there's nothing new to read...) and I forgot about that.

There's kind of a Todd McFarlane thing going on with the noodling.

Rather than reaching backward, lately I'm reaching outward. I'm currently reading the New Crusaders trade, and recently knocked out the first G-Man digest. They're a little light for my taste, but cute nonetheless. Well, okay, I do have an article of nostalgia I'm looking forward to cracking open, Maximum Minimum Wage, a brick of '90s alt-goodness.