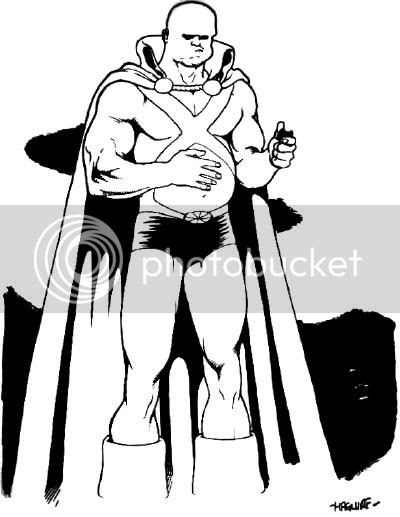 "I asked for Martian Manhunter munching on some Oreos and he delivered this hilarious piece. I love it. The Maguire humor is something that I don't think anyone can ever replicate. His run on the Justice League will always have a place of honor in my collection."

I just found out that Maguire will be at Comicpalooza 2014, so I'm aiming to score a sketch. You can count out any Oreo gags like the one above, and probably J'Onn J'Onzz himself, since Maguire's thoroughly trod that ground. It would be neat to get him to ink this piece, which would confirm it as a Kevin Maguire regardless of whether or not it was one to begin with. I think I'd rather get something entirely different, though.
Posted by Diabolu Frank at 3:51 AM

I really miss seeing humor in comics, what can I say?

If you can get a Maquire sketch, that would be awesome. I wouldn't be able to resist getting an Oreo-munching sketch of J'onn, though.

Inking that mystery piece would be nice, too.