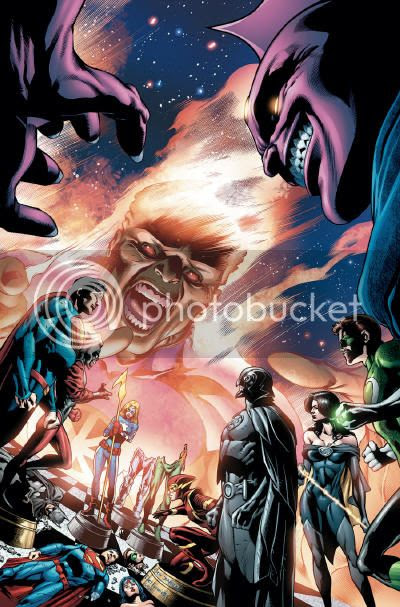 According to Comicvine, for the second straight month, the Martian Manhunter is listed as having appeared in 2,222 comics to date. Update needed?


JUSTICE LEAGUE OF AMERICA #12
Written by MATT KINDT
Art by EDDY BARROWS, EBER FERREIRA and TOM DERENICK
Cover by EDDY BARROWS and EBER FERREIRA
1:25 Steampunk variant cover by MATTEO SCALERA
On sale FEBRUARY 12 • 32 pg, FC, $3.99 US • RATED T
Combo pack edition: $4.99 US
Retailers: This issue will ship with three covers. Please see the order form for more information. This issue is also offered as a combo pack edition with a redemption code for a digital download of this issue.

A devastating battle against Despero begins as Manhunter and Stargirl arrive in San Francisco to save Stargirl’s family from Firestorm’s fallout!

Manhunter spotlight? Despero? A chess board? I like being catered to.

The final fate of Nightwing! The most unlikely of allies have set the Crime Syndicate in their sights — and they’re playing for keeps while the life of a hero hangs in the balance! Plus, the identity of the mysterious man in the hood is finally revealed!

Maxwell and Lily travel to Metropolis, where they find a mob of Superman protesters led by—Lois Lane and Jimmy Olsen?! The Man of Steel has no idea why they have turned against him, so it’s up to the Scribblenauts and the Justice League to solve this puzzle!

These amazing tales from JUSTICE LEAGUE #18-20 and 22-23 lead into “Trinity War,” and spotlight Cyborg, Batman, Superman and Wonder Woman! Plus: Learn the secret behind Pandora’s Box!

In these stories from BATMAN BEYOND UNLIMITED #10-17, Sector 2814’s newest Green Lantern has been posing as a student to expose a secret organization called The Brain Trust that is brainwashing young students and training them to destory the Justice League.

J'Onn appears in several issues collected in this volume, plus he's drawn by Howard Porter. Anybody read these?

Posted by Diabolu Frank at 6:21 AM

I read the Justice League Beyond stuff, and rather enjoyed it. no exceptional Martian moments as I recall, but good comics none the less.

Wow, I had completely forgotten about those Harley Quinn issues.

A chessboard + Despero looks promising, I will admit...

As I recall; He's definitely part of the team here, but it's still more of a Superman showcase.