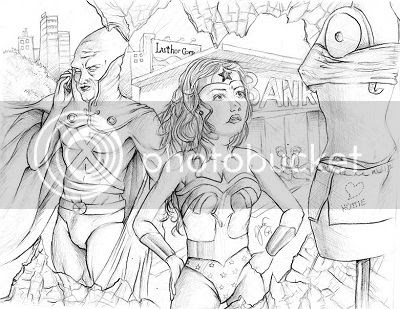 I don't have a problem with shipping in general, but when it comes to matches like Superman and Wonder Woman, I'm reminded of why pros are pros and fans are supposed to just be fans. Pros are supposed to have more insight, foresight, and imagination than that. For years, the "couple's" characterization was interchangeable and they came off as quasi-siblings, so the only reason to hook them up was their being two-thirds of the DC Trinity. To help differentiate them, Wonder Woman has become Super-Red Sonja, so that her character gets thrown under the bus. Superman meanwhile is just as milquetoast as ever, in spite of all those spangles and seams on his New 52 costume. We're different! We're exciting! Superman is schtupping Wonder Woman! Don't you like us now?

Hell no. Yeah, it's nice that Wonder Woman finally got a second title again, but it's a team-up book where she's second bill. Where do you go from here? Marriage? Then they'll have to kill Wonder Woman for teh sayles, which is gross and misogynistic. So have them break up instead? Over what? Superman wanting kids? Concerns over Wonder Woman's bloodlust? Infidelity in the heart? Wherever it goes, Superman and Wonder Woman get to be eternal exs, with Diana always the lesser half.
Posted by Diabolu Frank at 12:00 AM

Romances between comic book characters from different titles usually do not work well for reasons that you have stated.

Usually, the romances that work well are ones that are set up in a title. Examples of this are Reed Richards and Sue Storm, Apollo and Midnighter, and Clark Kent and Lois Lane. The concern I have with a romance between Wonder Woman and Superman is that it seems contrived and we know that it will likely come to a bad end. I must also ask what do they have in common in terms of shared values? Superman is hesitant to take a life, while Wonder Woman was shown as more willing to do so even before the New 52.

As for J'Onn, I fear that he would find most humans to not be that interesting and he also knows that his life span is far longer. It is hard to think of any DC or Marvel character who would be a good life partner for J'Onn. J'Onn and Diana may be outsiders in the current DC universe, but J'Onn knows that it will be a long time, if ever, that Earth is his home.

I seem to recall in another blog post J'Onn telling a Saturnian woman that he has to restrain himself too much with humans. One has to wonder if J'Onn might find humans boring as romantic partners. (One can only imagine what a telepathic, super-powered shape shifter is capable of but perhaps we should stay a few parsecs away from that territory. ;) )

Wait, Wonder Woman and Superman are a couple for real? I haven't been paying attention to the New 52 (obviously.) What happened to Lois? You're right; this is bleeding into the realm of fan fiction--DC started that trend with Batman and Catwoman a couple years back.

Well, here's what I take away from this: this is setting her up to be the love interest in the Superman V. Batman film, because I think a lot of the New 52 is just groundwork for DC Cinematic. (Maybe they think they are trying to do what Marvel did with The Ultimates.) It's a really boneheaded move, but my opinion of DC films is that of watching a a very slow-moving train approaching a cliff. They've had plenty of opportunities to fix things, so now their ruin is downright deliberate.

Like will said, I don't mind couples when it's actually part of their characters' premise, and there were a lot of great couples out there pre-N52. When I think of "DC couple" I always think of the Dibneys first, because their dynamic was on par with Nick and Nora Charles. Then of course there's Mr. Miracle and Barda, The Hawks, Adam and Alanna Strange, Buddy Baker and Ellen, Green Arrow and Black Canary. Those all worked and didn't seem like contrived fan service.

Oh, and to address will's point of "who is J'onn's ideal love partner," there was an article at IGN about DC's best couples, and "Martian Manhunter + Chocos" took the top spot. :) Here you go.

In all seriousness, though, I see J'onn as a perpetual widower still mourning his family. Having him move on from that by finding love again would dilute some of his pathos.

Batman & Catwoman worked okay as a couple in the Bronze Age when Bruce was more of a human being and Selina went legit. It doesn't work today because Catwoman has her own book and is vastly less compatible with a crazy misanthropic Dark Knight.