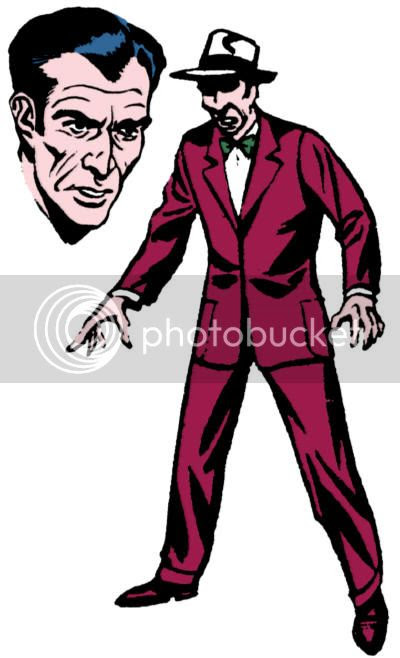 History:
Lieutenant Saunders and the Office of the Chief of Detectives were stymied by the dangerous criminal Monte Fisk, believed beyond any reasonable doubt to be responsible for a dozen murders, but too cunning for it to be proven in a court of law. "He covers his tracks like a fox!" On June 4th at noon, Killer Fisk had an alibi of being asleep during a shooting that Middletown Police couldn't crack, but was swiftly revealed to Detective John Jones. Secretly an extra-terrestrial, Jones used a technique unknown on Earth of retracing "thought processes" to draw out Fisk's criminal memory, but still lacked for evidence. Jones confronted Fisk with the knowledge that he'd used a clock's chime to cover his gunshot, which rattled the hoodlum enough to decide Jones needed to perish in an engineered accident.

Killer Fisk dispatched a pair of goons to run down Jones with their car, but the Martian Detective turned immaterial before impact. They next tossed Jones over the railing at High Gate Bridge to no greater effect. The hoods were spooked, but Killer Fisk presumed Jones was just too clever for them, and set about erasing the detective himself. Fisk dropped a safe on Jones, but when no body was found underneath, Killer decided Jones was too much for even him to tangle with. Planning to flee town, Fisk was visited by a spectral Jones who passed through a wall and soon hung from the hood of his speeding car. Killer Fisk was so disquieted that even after shaking the "ghost" of Jones loose, he decided to turn himself in to police.

Quote: "Say listen, Mr. Cop... I've got rights as a citizen! Either prove I killed somebody and arrest me or... beat it!"

Created by Joe Samachson and Joe Certa
Posted by Diabolu Frank at 12:00 AM