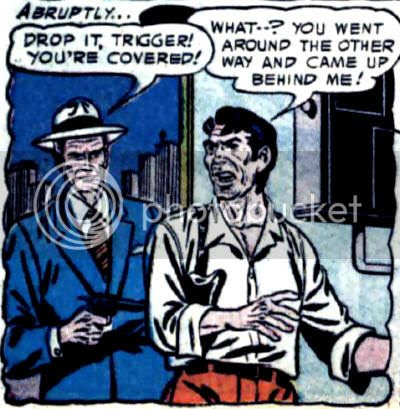 Trigger Tom Taylor was the first apprehension of a named criminal suspect by Middletown Police Detective John Jones in the "Manhunter from Mars" comic strip. He was preceded by a gang of three unnamed hoods in the panels immediately before those that made up Taylor's first and only appearance in Detective Comics #226 (December, 1955). Taylor was shown firing a revolver down a rooftop staircase at Jones, who was pressed against a wall around a corner. Jones turned invisible, walked up the stairs, and reappeared with his service pistol planted into the small of Taylor's back.

Created by Joe Samachson and Joe Certa
Posted by Diabolu Frank at 12:00 AM