Howdy folks! Diabolu Frank (actually) here, following a few weeks away on a sometimes rocky trip (picked up a nasty infection early in, and came home to sweep up broken glass while cleaning up a robbery scene.) I've been going through the comments left in my absence, want to thank all those who chimed in, and direct folks to my replies on... 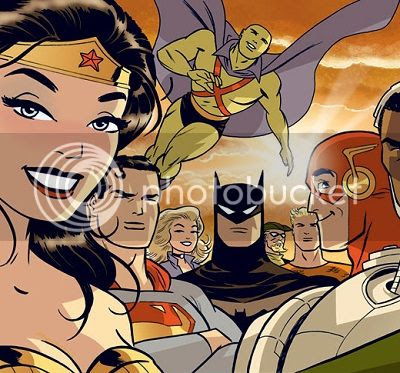 
JUSTICE LEAGUE UNITED #7
Written by JEFF LEMIRE
Art by NEIL EDWARDS and JAY LEISTEN
Cover by ANDREW ROBINSON
Variant cover by DARWYN COOKE
1:25 Variant cover by ROD REIS
On sale DECEMBER 10 • 32 pg, FC, $3.99 US • Combo pack edition: $4.99 US • RATED T
Retailers: This issue will ship with four covers. This issue is also offered as a combo pack edition with a redemption code for a digital download of this issue. Please see the order form for details.

The Infinitus Saga continues as the JLU battles the Legion of Super-Heroes over the fate of the innocent alien who may grow up to destroy the 31st century!

Dadgummit! A second straight Andrew Robinson cover without J'Onn J'Onzz, or even the JLU this time. Well that's okay, since Darwyn Cooke was not only incline to feature the Manhunter from Mars on a second cover this month, but to give us his swank take on the New 52 version!

JUSTICE LEAGUE #37
Written by GEOFF JOHNS
Art by JASON FABOK
Cover by JIM LEE and SCOTT WILLIAMS
Variant cover by DARWYN COOKE
1:25 Variant cover by MICHAEL CHOI
On sale DECEMBER 17 • 32 pg, FC, $3.99 US • Combo pack edition: $4.99 US • RATED T
Retailers: This issue will ship with four covers. This issue is also offered as a combo pack edition with a redemption code for a digital download of this issue. Please see the order form for details.

Super heroes are no more! What it means to be human is in question! The world is on the brink of a new stage of evolution – or total extinction! – and it’s up to the Justice League to save it! “THE AMAZO VIRUS” continues to devastate the Western World as Batman, Superman, Wonder Woman and Lex Luthor struggle to not only contain the virus, but cure those affected by it. But as they work against the clock, a legion of assassins is out for Lex Luthor’s head. Will the Justice League protect Luthor...or the world? This issue is also offered as a combo pack edition with a redemption code for a digital download of this issue.

Sometimes, I don't quite know what to make of Darwyn Cooke, but then he'll do a variant cover so good I list an issue here that I'm fairly certain will not feature J'onn J'onn, because it's so darn good. While Cooke includes later Leaguers in Silver Age attire Black Canary and Green Arrow, the very prominent appearance of the Alien Atlas as the only full figure and flying character fairly screams "still a founder of the Magnificent Seven." At the same time, Cooke acknowledges the New 52 status quo by offering Cyborg as one of the most visible heroes on the cover, and manages to give him a more classic, iconic look. The guy's aces!

Darwyn Cooke’s acclaimed take on the Silver Age heroes of DC Comics is back in a new hardcover collecting the 6-issue miniseries plus, for the first time, JUSTICE LEAGUE: THE NEW FRONTIER SPECIAL #1! When Cold War paranoia outlawed the heroes of the Golden Age, stalwarts such as Batman, Superman and Wonder Woman continued to fight for truth and justice. But as the world hurtled toward an uncertain future, a new breed of hero would define the American Way!

I read an oversized hardcover library copy of the main mini-series, and bashed up my New Frontier Special. Probably ought to invest in this version, eh?

This value-priced title collects the entire 24-issue run of BLUE BEETLE from the 1980s, including the Beetle’s battles against DC Universe villains Chronos and Dr. Alchemy. Includes appearances by The Question and the Teen Titans in stories from BLUE BEETLE #1-24.

You know, I'm just not that into Blue Beetle, but I know a lot of folks who are and will be happy to have this collection. I'm just glad DC still produces the cheap black & white Showcase Presents. Marvel seems to have abandoned their Essential editions for full color "Epic Collections" that cost at least twice as much for fewer pages and stick to more mainstream tastes. I've yet to buy an "Epic," no Essential in a year, but I just got the Showcase Presents for Men of War and Super Friends a few months ago (about the only money of mine DC can still rely upon.) Anyway, Martian Manhunter appears here in three consecutive issues, mostly related to Millennium tie-ins.

With Wonder Woman’s Lasso of Truth severed, the very concept of truth has been fractured – and the Justice League must contend with a world redefined by the dreams and fears of the human race. Then, the JLA battles for control of Atlantis with the help of some mages...and when only Batman remains, the Dark Knight assembles an unexpected new Justice League! Don’t miss this title collecting JLA #61-76.

It seems like you cannot overvalue the JLA brand. DC is still drawing ducats a decade and change removed from the dull, distancing Kelly/Mahnke run by repackaging the issues as part of a more comprehensive collection under that seemingly evergreen banner. Are any of the trades from the Meltzer/McDuffie/Robinson JLofA volume still in print? This edition covers the launch of this creative team's run with the so-so "Golden Perfect" and the interminable "Obsidian Age," plus peripheral tales.

When Starfire develops a massive crush on the latest teen pop sensation, Robin will stop at nothing to recapture her attention – even if he must become a teen idol himself! Plus: Cyborg gets an awesome new jacket! Boo-yah!

Posted by Diabolu Frank at 5:54 PM

That's too bad about the break-in. I hope nothing too valuable was stolen!

I'm perplexed by the fact that J'onn is on both the JLA and JLU covers--in two different costumes... (Cooke almost makes me like the N52 costume, which is saying something.) He has the magic touch of making everyone's busy N52 costumes look sleek, which takes skill. This is going to be the book that makes me break my three-year DC purchasing boycott, because I want DC to know that this is the kind of stuff I will spend money on.

I love Darwyn Cooke's style because it's clean, elegant, and more often than not features smiling superheroes--how often do you see optimism in comics today? For me, his artistic style evokes "comics" much more than the muddy hyper-realism which is the standard today. I'll take simple colors, efficient lines and dynamic composition over pedestrian realism any day. I don't know what he's been up to for the past few years, but it seems like he dropped off the radar for a bit.

Besides being happy to see some nice art, I (over-)interpreted Darwyn Cooke Month as a tacit editorial acknowledgment that DC will soon diverge from the grim n' gritty homogeneity of the New 52 and allow for some diversity in their storytelling. Or maybe that's just wishful thinking on my part. I see classic J'onn J'onzz on a JLA cover wearing the black shorts from his first appearance--that's got to mean something.

That deluxe edition got reprinted again? That was always something I always yearned for and will hopefully someday own; like dope I spent my money on "Absolute Long Halloween" instead. It's been sitting on the floor for years, just taking up space. Ahh, youth.

I didn't even know they were still printing Showcase Presents; I went looking for some Flash volumes and they were out-of-print. The fact that there's a Blue Beetle edition coming makes me wonder if editorial opinion regarding Ted Kord is undergoing a bit of a sea change...

I wanted to like 90's JLA more than I actually did. Just sold my Obsidian Age trade at a garage sale.

Frank, I hope that all is well.

I have become fond of the New 52 costume as the dhoti at least evokes a different culture or fashion sense. (A kilt would have worked as well, but kilts are better known in Western culture than dhotis)

Frank, I did publish a few comments and links on upcoming material I stumbled across. My hope is that J'Onn starts getting more positive attention in the New 52, as a lot of what has happened proved to be a wash. (Stormwatch, especially. I had to consciously look for signs of J'Onn's characterization in most issues of that book.)

Frank, I don't know if you saw this but I thought that you might like it. http://www.smithsonianmag.com/arts-culture/origin-story-wonder-woman-180952710/?no-ist

Will, that was an interesting article, and the timing of your bringing it to my attention amuses, as I have a frothing-at-the-mouth feminist podcast up today for The Marvel Super Heroes.

Liss, Cooke spent the past several years at IDW producing comic book adaptations of the Richard Stark/Donald E. Westlake Parker novels The Hunter, The Outfit, The Score and Slayground. As for his DC fanfare-- I just think Dan Didio likes his work. No deeper meaning, unfortunately.