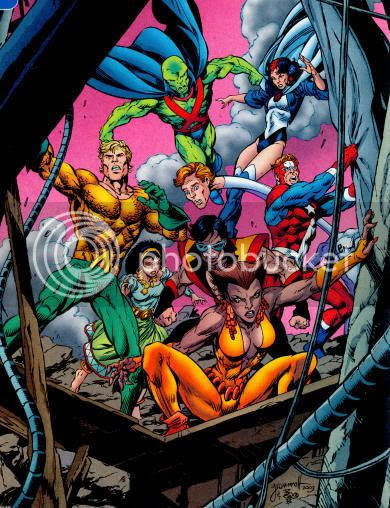 In the early 80's, like much of DC's line, Justice League of America's sales stunk. Marvel had slowly but surely overtaken DC as the comic book sales leader in the 70's, and DC was feeling the heat. This sales crunch would lead to the "Marvelization" of DC in 1986, but what good would that be to Gerry Conway in 1984?

Conway was a popular Spider-Man writer in the 1970's, who made the move to DC late in that decade. After a number of failed series, and the modest success of Firestorm, Gerry took on JLofA. At that time, royalties were just beginning to be given to comic creators, but up to that point JLofA was the last book anyone would want to work on. While a popular title, writers and artists were not compensated for the extra work involved in producing a series about a 1/2 dozen + heroes with diverse looks and powers, often fighting villains of equal numbers. The series was creatively stagnant, buoyed by name brand characters and the Super Friends cartoon show.

For several years, Conway plugged away at fun JLofA stories that didn't attract much attention in the rollicking 80's, and sales continued to falter. Eventually, something had to be done. I doubt anyone at DC would admit to this, but it looks like they attempted to give JLofA the same X-Men flavor that turned The New Teen Titans into DC's gangbuster sales juggernaut of the early 80's. Instead of an international cast, JLofA would be the first major multicultural super-team. The group would consist of an Hispanic, a woman of African descent, a runaway teen of vaguely ethnic origins, an alien, a disenfranchised youth, and a few mainstays. Instead of a satellite in orbit over earth, the JLofA would now work out of a warehouse in Detroit. Sporadic Denny O'Neil style "relevant" stories would be told. None of the team members would have series outside of JLofA, giving Conway creative control that outstripped even Claremont's. There would be more personal interaction, and character's lives would actually be at stake. Kind of like the X-Men.

It looked good on paper, anyway.

Back to that alien. Conway, and penciller Chuck Patton, had created their "streetwise" team. Too bad most were terrifically underpowered to face anything remotely resembling a significant threat. Super-strength, invisibility, elasticity, animal mimicry, under-water breathing, and vibratory powers are not especially impressive. While Conway still had the magical Zatanna, the team needed a powerhouse to carry them. Guess who Conway picked?

Despised within comic circles, Justice League Detroit (not an official title at the time, but it stuck in fan circles) was still featured in some pretty good stories. Sells held up for a while, but it just wasn't the JLofA. Editor Alan Gold expected trouble from the change, and allowed himself a full page editorial in the annual to discuss his rational behind accepting writer Gerry Conway's proposal. Conway had wanted to reuse his short-lived Steel and Vixen characters from the 70's, while artist Chuck Patton had been looking for a place to put his ideas for Vibe and the Stevie Nicks/Cyndi Lauper/Madonna inspired Gypsy.

I'll always have a soft spot in my fanboy's heart for the Detroit League, if only because of the inclusion of Aquaman, Steel, and of course MM. Like you say, the series was creatively stagnant by the early 80s. The Detroit shake-up may have failed in the long run, but it paved the way for the "franchising" of the League in the late 80s and early 90s, which in turn prompted the reutrn of the "Big 7" -- and both of those eras produced some really fun League adventures. The Detroit League opened the door to wide-scale changes to the Justice League, which was really pretty unheard of before then.

i think the idea was fine, but the execution was faulty.

i saw no good reason why the "B" team of the JLA--the Hawks, GA/BC, Red Tornado--couldnt have stayed with the team. yeah yeah, some of them had their own strips, but they were always just back-ups and hardly anything that couldnt have been halted to keep them exclusively in the JLA.

i think a book with Aquaman, MM, Zatanna, Elongated Man, Green Arrow, Black Canary, Hawkman, Hawkwoman, Vixen, and Steel couldve worked well, and not have been so jarring a change.

Vibe and Gypsy were just fairy weak characters, and having them both on the team at the same time was hard to swallow, i think. maybe just one of them wouldve worked, or if both of them had been drafted into the family with the other more established members it mightve been a better balance.

and one more thing--it never made sense to me how abruptly Aquaman quit the team--if i hadnt been a fan, i'd think he was a big jerk, too, as written--and once Batman came in it pretty much became Batman and The Outsiders mk.2.

My feelings about the Detroit League remain mixed, but I've only reread up to the Tuska issues so far. I didn't really get into the book until after the icon-friendly Chuck Patton left and Luke McDonnell came on to give the newbies street credibility.

My latest reading has been more in-depth and analytical, so I'm getting more out of it. By breaking down the issues by character (starting with my next post,) Vibe being intentionally green instead of embarrasingly lame becomes more apparent. The awful accent disappears almost immediately.

Meanwhile, Steel was a solid performer right out of the gate, and really felt like a young Captain America-type in training. If he'd been the sole new inclusion among veterans, ala Firestorm, I think he might have ended up with a respectable following. Instead, I must confess that even I've slagged off on the guy, based on association more than lack of merit. Having Vibe come off as the smarter of the two doesn't help, though.

I misremembered the extent of Aquaman's abuse of power, as well. There were really only two egregious occurances, and both directly tied to his emotional distress regarding his marriage. It was little more than a subplot laced within two arcs, but it sat in my memory as a serious black mark for years.

Also, Vixen rocks. I'd forgotten what a bright spot her presence was in the early going, as her influence on the book waned mightily over time. Not a popular opinion, but especially in light of the new direction, I'd say Vixen rendered the Hawks redundant. Ollie and Dinah should have stayed, however. Their departure made exactly 0 sense.

If nothing else, Detroit made people more accepting of the Giffen/DeMatteis League, so I'm grateful.

I can't imagine Vibe or Gypsy as conceived in the League under any other circumstance than the one Conway and Patton presented. I still can't see Gypsy joining as she stands today. I'm glad they were members in their incarnation, because that was the only point in time their inclusion made the slightest sense. Part of the point of Vibe was that he didn't have the stuff, so it seems to me being weak was the point.

Gypsy was always more interesting than she's ever been given credit for, and I thought it a shame Gail Simone of all people would so mishandle her. I can't think of any other writer on the character to so totally under-utilize her potential.

Oh, and since you mention them Rob, I'd take the JLD over the Outsiders any day of the week. I remain clueless as to the appeal of that bunch, beyond the Batman association and Aparo/Davis art chores.