UPDATED 11/11/07:
Famed comic writer Roger Stern his own bad self corrected an error I made on this post regarding his run on Justice League Classified:

"J'onn plays a major role in this story arc, which covers two generations of the JLA -- the (just) pre-satellite period and the lunar Watchtower era. As a matter of fact, he narrates quite a bit of it."

...Which of course makes me glad I've never had cause to say anything bad about his writing. In fact, my friend Dave is a huge Avengers fan, Stern's run being his all-time favorite. In my Marvel days, I dug on his Captain America & Dr. Strange runs, plus Hobgoblin was a favorite villain from when I followed Spider-Man. I lost contact when I switched to DC though, outside of the odd Superman family material. Glad I've got an opportunity to catch up in the coming months. Check out the preview pages at Byrne Robotics, though I saw no Martians there at present.

JLA CLASSIFIED #50-51
Written by Roger Stern
Art by John Byrne & Mark Farmer
Covers by Joshua Middleton
The first two parts of a 5-part epic reuniting the legendary Roger Stern/John Byrne team! The Justice League faces a new foe who seems to remember them well enough to want revenge. But when have they faced off before? Meet a mysterious new foe again…for the first time!
Issue #50 on sale January 9; issue #51 on sale January 23
32 pg, FC, $2.99 US 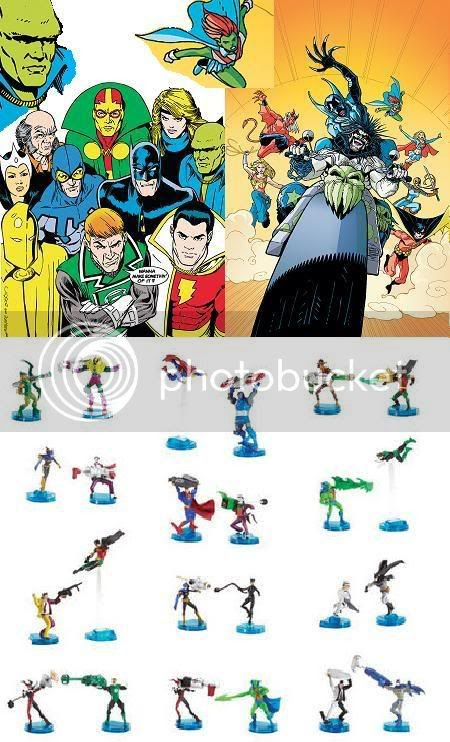 Confirmed Presence:
After an embarrassment of riches in recent months, J'Onn J'Onzz seems to have gone into hiding. No definite appearances in new DC Comics this month...

JUSTICE LEAGUE INTERNATIONAL HC
Written by Keith Giffen & J.M. DeMatteis
Art by Kevin Maguire, Terry Austin and Al Gordon
Cover by Maguire & Austin
A new hardcover collecting the classic JUSTICE LEAGUE #1-6 and JUSTICE LEAGUE INTERNATIONAL #7 from the late 1980s! Can an unlikely new Justice League line-up work as a unit to stop terrorists at the U.N., a brigade of Rocket Reds, the Royal Flush Gang, and other threats - or will they succumb to in-fighting and bad jokes?
Advance-solicited; in stores March 12 o FC, 192 pg, $24.99 US

It's understandable with the growing popularity of comics in public libraries that the company would want to get catalogue highlights into hardcover, but seeing as how most of the JLI have been raped and killed in the last few years, what's the point? Couldn't they have turned this into a more desirable Omnibus/Absolute edition, getting the long out-of-print "Secret Diary of Maxwell Lord" second volume in there as well? Not for me.

DC Fighting Figure 2-pack Action Figures
Sculpted by the Four Horsemen, these mini-figures 2-packs features figures with a signature, projectile, punch or flying attack. Featuring some of the greatest battles ever fought on a desktop, each DC Fighting Figure set pairs one spectacular hero with one evil villain in the ultimate showdown! Every 2'-3' figure comes with multiple points of articulation, a unique action feature and highly detailed sculpts!"

Not one, but two Martian Manhunter figures in this assortment. Oh, yeah! Sure, only Batgirl, Green Arrow and the villains only got a figure each, but for once J'Onn isn't among them, and them's props. Shame he's grounded on both figures with similar poses and powers employed.

Ms. Martian:
J'Onn J'Onzz has a girl analogue now. I still can't get used to that. Have they even met?

TEEN TITANS #55
Written by Sean McKeever
Art by Eddy Barrows & Rob Hunter
Following up the epic "Titans of Tomorrow" storyline, we catch the Titans in a moment of quiet before the next storm. As one Titan leaves forever, Wonder Girl and Robin explore their newfound feelings for each other as Ravager enjoys herself by pitting Blue Beetle against Kid Devil.
And watch out for the introduction of the new Clock King, a modern-day Fagin out to create a villainous team of his own. Fan-favorite writer Sean McKeever continues to deliver his own special blend of excitement and angst sure to keep this book on the top of your must-read pile!
On sale January 23 o 32 pg, FC, $2.99 US

BLUE BEETLE VOL. 3: REACH FOR THE STARS TP
Written by John Rogers
Art by Rafael Albuquerque
Cover by Cully Hamner
In this volume collecting issues #13-18 of the hot series, Jaime has his hands full when he learns the scarab's alien owners are invading Earth - and no one will believe him! Plus, more adventures guest-starring popular Green Lantern Guy Gardner, the Teen Titans, the villainous Eclipso, Typhoon, Giganta and more!
Advance-solicited; on sale February 27 o 168 pg, FC, $14.99 US
Posted by Diabolu Frank at 10:17 PM

I don't think Miss Martian has met J'Onn. Near as I can tell, she has only appeared in the pages of Teen Titans, and is a White Martian. Yes, another one. She's cute in a sort of animated Starfire way, but I remember listening to a DC Nation podcast where someone mentioned her and George Perez bemoaned that the Titans had truly become the "Junior Justice League," which cracked me up.

"Status Unknown:
Highly dubious. Both books feature the "classic" JLA, but...I saw no Martians on preview pages from the latter at Byrne Robotics...

JLA CLASSIFIED #50-51
Written by Roger Stern
Art by John Byrne & Mark Farmer
Covers by Joshua Middleton
The first two parts of a 5-part epic reuniting the legendary Roger Stern/John Byrne team! The Justice League faces a new foe who seems to remember them well enough to want revenge. But when have they faced off before? Meet a mysterious new foe again…for the first time!
Issue #50 on sale January 9; issue #51 on sale January 23
32 pg, FC, $2.99 US

Not to worry, Frank. J'onn plays a major role in this story arc, which covers two generations of the JLA -- the (just) pre-satellite period and the lunar Watchtower era. As a matter of fact, he narrates quite a bit of it.

Hee hee-- I got a comment from Roger Stern on my sad little blog! And Roger Stern's got $3 an issue I wasn't going to spend without confirmation, so everybody wins! Thanks for the info, and I'll be sure to update the post! Also, thanks for using J'Onn J'Onzz-- he's been none to get the shaft at times...

Now that I've got that done, Luke, I've got to agree with Perez here. I never had a problem with Young Justice being "JLA Jr.," seeing as that was their book's proposed title, and I preferred the dynamic be different there than in Titans.

The Titans always had their own identity, as they were mostly obscure kid sidekicks to lesser super-heroes at first, and went for mostly original creations thereafter. I accepted the new "Teen Titans" because Geoff Johns injected "NTT" melodrama and personalities into the seperate family Peter David crafted in YJ. With Johns' departure and all the new members, I'm getting the same feeling I had about the willy-nilly, short lived line-up post-Zero Hour (not to mention the awful Jurgens team.) I hope the rumors about two seperate Titans teams (the founders and the new kids) are true.

As for Miss Martian-- y'know, I always wanted to see more white in J'Onn's costume, and she seems a nice enough kid. Shame Zook continues to suffer prejudice, though. We can't all be eloquent speakers or develop past the body of a toddler, okay? Most of us, sure, but not all!

You know, reading what Mr. Stern had to say (and can I just say that dammit I miss when Avengers was not only enjoyable but also, I dunno, readable?!), I'm of mixed emotions. First off, I am intrigued, because that story sounds really cool. But secondly, I am ticked off, because now I am going to be buying another arc in Classified, and my budget can hardly take it! Yikes!

Aaaaanyway. As I have said previously, I was never much of a Teen Titans fan, but from what I have read or watched of them (Sorry, but I adore the cartoon), they work best as their own team, standing on their own two proverbial feet. And Johns' Titans followed that same path for the most part, which I think is what lead to the title's renewed success. Time will tell if the new two-team format works out, but for what it's worth, the lineup of Titans East is pretty much the Wolfman-Perez crew. Me, I say just give me a Tempest ongoing picking up from where things left off in Aquaman. That, or a Jericho ongoing. Yeah, I went there. Cuz Jericho rocks.

I like Jericho, though it took me many years to come to that conclusion. I blame the white man's afro. That really never worked out for any anglo-saxon ever.