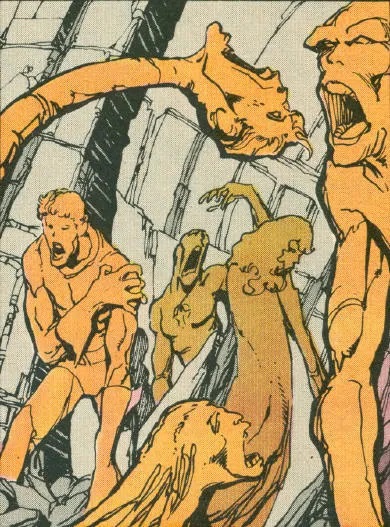 "...or George Pérez was pulling full art chores at his peak along with Marv Wolfman on the highest quality paper in the industry, and all I got was this lousy panel." But hey, by this point Pérez's immaculate inks and experimental wash techniques had made the flagship book in DC's new direct market-only deluxe line very late, imperiling a bold direction that eventually proved ill-fated, and requiring old NTT inker Romeo Tanghal to step in. All things considered, Justice League Detroit were lucky to look this good on a book that saw print while they were still together. The prophesy of the even more ill-conceived Raven turning evil and drawing her demonic absentee father into our world had come to pass. Think "The Coming of Galactus," but in a 50 foot loincloth and white leather hip boots instead of an armored purple tunic. So basically, Armageddon had never been quite so threatening to irresolute heterosexuality below the Bible Belt... not that there's anything wrong with that. The Titans themselves were "pawns whose minds Trigon had tapped, whose secrets spilled forth, who possessed knowledge of others like themselves with abilities far greater than any ordinary man... Others whose mighty powers can disrupt the course of raging rivers, or fight injustice in this country, and others... Those who live throughout the known world, and in lands beyond mortal ken... those others whose steely determination stands for all that is right and good. Those others... who must be dealt with before this earth can become Trigon's own." Superman, Batman, and the Justice League were clearly depicted in this sequence, but one featured fantastic figures who could as easily be Amazons as the Norse, or some little known Global Guardians types. I assume they were intentionally vague one-offs (unless they were from another of the mostly under performing deluxe format line, or short series I never read myself. Amethyst?) Through knowledge gleaned from Raven, Trigon sent earth's mightiest heroes through a dark night of the soul. Unlike when the X-Men began trumping A-listers like the Avengers based on sales in the 80's though, the Titans were both responsible for Trigon's success at remaking their world into a fresh flesh hell, and they defeated him through their own weakness. You see, each Titan, like presumably J'Onn J'Onzz and the other heroes, were confronted with a cruel doppelganger of themselves responsible for realizing their worst fears (Nightwing's failure as a soloist leading to Batman's demise, Wonder Girl slaying her unpowered husband, and so on.) One imagines the Manhunter from Mars abandoning both his own people and the neophyte Leaguers to their mutual dooms due to his divided loyalties, though no such thing was depicted here. Eventually, the individual Titans forsook their heroic ideals to murder their grey-toned tormentors, taking on first their glowing red eyes (a masterful effect that resembled spot varnish) and then becoming negative images of themselves ensconced in nefarious crimson. Finally, these wicked Titans were made to kill their own possessed teammate Raven to free themselves. One might guess most of the world's heroes were continuing to fight this slippery slope, though the Titans were additionally influenced by both Raven and Lilith.
Posted by Diabolu Frank at 11:54 PM

Who's that, front and center, with his life active sucking? Awww yeah, Steel, baby!

I've actually never read much in the way of the Titans. May need to check this out.

The Titans were actually my primary touchstone to the mainstream DC Universe throughout my childhood, as most of my other favorites were left of center (Ambush Bug, Blue Devil, etc.)

The Terror of Trigon TP

Any Deathstroke the Terminator appearance before "Titans Hunt"

Absolutely nothing after "Titans Hunt"