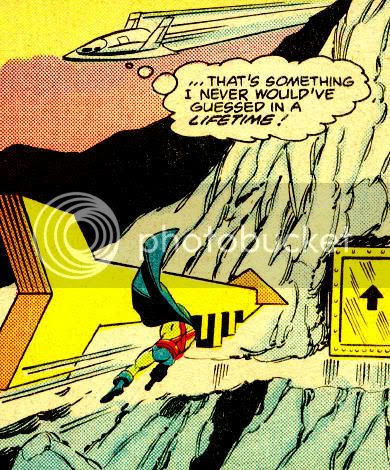 Aquaman: Returned with his wife to an empty Bunker. Took another L.O.S.T. up north to find his team. “Believe me, Mari... I’m sorry. I’ve no excuse for what I did, leaving the League.” Joined Vixen and Martian Manhunter against Amazo. “I failed the League, J’Onn... but I found the woman I love. And in finding her I found myself. I weighed duty and love in the balance. Love won. Under the circumstances, when we return to Detroit... I think there’s nothing else I can do but resign from the Justice League. Maybe then I can rediscover my life... with Mera by my side.”

Vixen: Freed herself from bonds, then shattered the boulder and rescued her friends. Mistook the Aquaman-piloted L.O.S.T. for Dale and J’Onn, only to complain about the Sea King’s tardiness. Met Mera. “Arthur said you were the one who convinced him to seek me. We owe you a debt of thanks I can never repay.” Possibly because she would soon be driven insane by Earth’s polluted oceans, get impaled while trying to murder her husband, and kiss this world goodbye back to her own other-dimensional home. Sucks to be an Aquaman supporting character. Still, Mari was pleased. “Well, how do you like that? Old Arthur’s got a heart after all.” Less pleasing: getting beat on by Amazo some more. But as Vixen noted, “Back when I was a fashion model, I spent a week in Vancouver--lovely town. Let’s keep this creep from flattening it.”

Elongated Man: Limp body used as a rope by Vixen.

Steel: Tore up enough that Mera freaked out over the exposed artificial musculature of his right hand. Woke up hot over Amazo and screamed at Mera, “Where is he?” Caught Vixen before she could be smooshed against the side of the L.O.S.T.

Martian Manhunter: J'Onn entered Superman's Fortress of Solitude by using its giant key. Why an intangible wraith would need to do so, I don't know, but at least MM was one of the few characters who could actually lift the key and use it. “Long ago Superman programmed safe passage into the Fortress computers for all members of the original League--“ While J’Onzz was investigating, an innocent trucker (and his truck) was slain by Amazo. J'Onn redeemed himself slightly by using the information he uncovered at the Fortress to defeat the android. “He was created by Professor Ivo solely to obey commands. No sadder, lonelier creature has ever existed. When not driven by outside programming, Amazo has but one desire. Oblivion... Left to his own devices, Amazo would shut himself down instantly. Obviously, the fact that he has not done so indicates he is under the command of a human intelligence." A stray meteor had pierced the Fortress’ defenses, inadvertently reactivating the android and sending it to wander cluelessly until its program absorbed the malevolent consciousness of Slick Jake MacGregor. A constable had found a picture of MacGregor in the wreckage of St. Jude, which was all Manhunter needed to assume his form. This logic trap worked well against the artificial intelligence of Amazo/MacGregor, allowing Aquaman the chance to deliver a knockout blow.

The Creators: Especially under Manhunter’s “leadership,” the character Gerry Conway created to star in her own aborted series continued to prove herself one of, if not the, most effective current Leaguers. I like Vixen though, so I won’t hold that or her Storm-lite bout with claustrophobia in the pit against her. Steel also continued to perform well for his age and status, though maybe getting five issues of “Steel: The Indestructible Man” out before the implosion got some of the excess paternal love out of Conway’s system. George Tuska continued to be graced by Mike Machlan’s inks.

Most Embarrassing Vibe Quote of the Issue: Not a word. Just blissful, accent-free silence.
Posted by Diabolu Frank at 10:56 PM

Look at J'onn, showing off his superstrength (for once). I have to agree that JJ is not portrayed as a particularly good leader, and I agree that he probably wouldn't be. He's much better at coordinating a battle and gathering information than he is at actually leading troops into a fight.

One would think Aquaman would be a good choice for that, being a king and all, but it doesn't seem to be working out terribly well...

Judging from Vixen and Steel's roles here, I guess the writing is on the wall about who the "real" stars of this title are going to be, huh? I don't like MM being portrayed as a bad leader, though. Maybe it's because of how I was formally introduced to the character (JL toon, yes, I know, I'm a sad, sad excuse for a geek), I can't really picture him as ineffectual or incompetant, even if he does save the day through intelligence-gathering. Maybe his Martian brain was effected by the Texas-style chili.

I never had the slightest use for Aquaman growing up, which means that while I share a lot of the love rob! has for the character, I come at him from a different place. As I got older and realized in retrospect how much crap I'd gone through in my life that I hadn't truly dealt with, I came to relate to Aquaman as a sort of fellow undiagnosed PTSD sufferer. Seeing him go through periods like his Detroit FUBAR wasn't an embarrassment for a character I idolized, but a relatable rough patch of one's ability to torpedo themselves with myopia and denial. I'm not interested in seeing him prove he's one of the greatest super-heroes ever so much as wanting to see Aquaman and more comics fan in general recognize simply what a fascinating character he is as is.

This might explain why I'm comfortable saying Aquaman was a lousy team leader and a worse monarch. That stuff wasn't added until the 60's, and I think it's part of the reason the character has been increasingly unpopular in that role ever since. PRINCE Namor works because being a reactionary jackass was part of his charm from conception. KING Arthur pulling the same bit just makes him staid and dull at best, grating and derivative at worst. I think Aquaman should have a natural grace and nobility, like Lancelot without the adultery, or a Lone Ranger of the Sea. That crown just stiffened his neck and gave him lower back problems.

The problem with J'Onn J'Onzz as a team leader isn't his strategic thinking or commanding presence, but his inability to see individual heroes as anything but equal. He gives irresponsible, underpowered, and inexperienced persons (including civilians) relative autonomy in extremely dangerous situatuions and then wonders why death surrounds him.

"Um, J'Onn? We're short a League-founding commander and you want to lead me, Zatanna, and three teenagers against Amazo in unfamiliar teritory? Bless your blind bleeding heart, and curse your screwy alien mind, but I'm calling this dude I met in Metropolis when I started this Vixen gig before you get us all killed." But he's a great chairman for the Magnificent Seven and a highly effective drill sergeant.

Speaking of the "Super-Seven" (as Fox called them,) there aren't that many leaders among them to begin with. Superman is infamous for absenteeism to begin with, and was a terrible team leader in his one stint during Jurgens' run. He actively polarized and alienated his own charges. Many seem to think he was in charge of the Morrison team, but he was only the figurehead of the triune-chair rounded out by the brains, J'Onn and Batman.

Batman is of course excellent at bossing people around, but less concerned with moral and team building. He tends to view teammates as appendages.

Flash? Technically lead the Year One crew, but they weren't actively guided so much as a cooperative. It pretty much came down to who was the nicest, most agreeable mouthpiece.

Green Lantern? Irresponsible showboats, no matter which Earthling you point toward. Hal's done well in instances of guiding fellow Lanterns, but he has no sticking power. As for JLEurope-- that ended sometime after he knocked-up one of his associates and bailed on her, but before he went insane and killed a ton of people. Yeah, not filling anyone with trust here.

Wonder Woman is the only other one who was remotely effective, but shared some of Manhunter's problems with overlooking seriously flawed members, Flash's lack of assertiveness, and makes Superman's attendance record look sterling. For God's sake, she quit JLEurope, off panel and without notice, after one issue.

"Wonder Woman is the only other one who was remotely effective, but shared some of Manhunter's problems with overlooking seriously flawed members, Flash's lack of assertiveness, and makes Superman's attendance record look sterling. For God's sake, she quit JLEurope, off panel and without notice, after one issue."


Well, to be fair, can you really blame her? That was a motley crew at best.

Well, no... but it's the principle of the thing. In the long run, I would say the move hurt her career, also. Her visibility was very low until War of the Gods, which proved an embarrassment. She didn't get an upturn until Mike Deodato Jr. took over her art chores. By my calculations, she spent about five years deep in the wilderness of disinterest. Plus, Europe was the more straightforward of the two teams, and didn't really get lame until Hal Jordan took over in the Spectacular.