Back when I had the "Rock of the JLA" site, I did a fan casting of higher-profile friends, enemies, and associates for a theoretical movie. In those days, I was stuck on WebTV, meaning almost all the pictures on the site were low-res found images off other sites. I wanted to preserve that project as it stood, so mistakes and lapses in quality are all intact. I think it holds up pretty well, though many of the actors are now too old, and Jennifer Jason Leigh wasn't in "Fried Green Tomatos. If we had IMDB back then, I didn't know it. Resized for space, part one of two, rolling...

MARTIAN MANHUNTER
The Motion Picture
WARNER BROTHERS does not Present
"MARTIAN MANHUNTER" AVERY BROOKS CLANCY BROWN with CHARLES FLEISHER as the voice of 'L-Ron' Music Composed by JEAN-MICHEL JARRE Character Animation and Visual Effects by INDUSTRIAL LIGHT & MAGIC Executive Produced by NOBODY & This is a joke Produced by JOEL SILVER Written by J.M. DeMATTEIS and KEITH GIFFEN and MARK WAID and GRANT MORRISON THIS IS NOT A REAL MOVIE. I'M JUST PLAYING DON'T SUE ME Directed by JOE DANTE

Let's just be up front about this...There will never, ever be a Martian Manhunter movie. Even if one were ever produced, it would undoubtedly suck. If abominations like "Batman & Robin", "Superman 4:The Quest for Peace", and "Captain America" could happen, what chance has MM got?

On the other hand, most of these actors could potentially provide their voices to an animated show. Unlikly as that may be, I can tell you from experience that hearing Avery Brooks' voice while reading J'Onn in JLA just enrices a person's reading experience. Give it a shot... 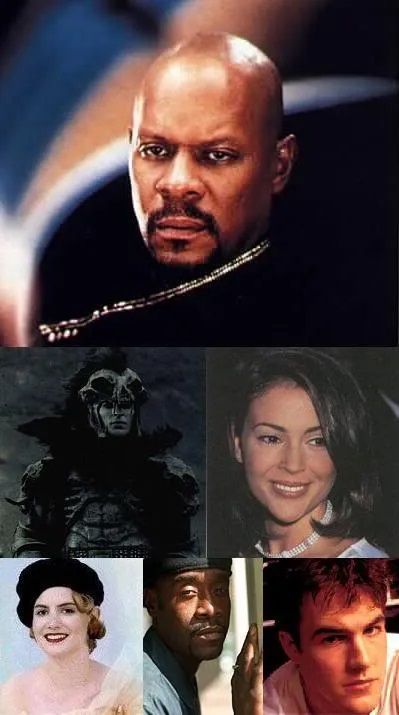 Avery Brooks as The Manhunter from Mars
J'Onn shouldn't just be a tall guy with a deep voice. The actor has to be able to emote, even when he isn't speaking. When he does speak, the words should have weight, but he shouldn't come off as cold. I've always imagined a little cracking in J'Onn's voice, especially during his many heartfelt speeches. Brooks captures all of these things, plus he's fairly tall, to boot!


Clancy Brown as Despero
Anyone who saw the only good "Highlander" movie knows Clancy Brown can play a balls-to-the-walls destructive madman. If you caught "Stephen King's Pet Sematary", you know he can pull off the creepy serial killer part. What you may not know is that the same guy also provides the golden throat for Lex Luthor on the WB's Superman cartoon. He'll need a little bit of all three to play a sadist like Despero.


Alyssa Milano as Gypsy
She's perky! She's tough in a cute way! She's Tony's daughter! How could they not be the boss of Judith Light? Who am I trying to kid? I'm not a huge fan of Gypsy to begin with, and all the actresses that came to mind are too old for the role. I do like Ms.Milano, and it's not like it's a demanding part. Bonus-She'll make anyone who plays MM look even taller!

Jennifer Jason Leigh as Cameron Chase
For this role, you need someone who's attractive without looking "Hollywood". She has to appear immediatly formitable, and noticably intelligent. In roles from Dorothy Parker to the "Single White Female" psycho, Leigh has proven that she's right for DEO Agent Chase. I think she can hold her own against a seven foot Martian, and still make it all believable.

Don Cheadle as DEO Director Bones
Right off the bat, for those who don't know, Mister Bones was African-American. Second, Bones is a reformed who, who still believes he's doing the right thing by safeguarding the United States from the metahuman community.

Now, you've got to get the sense that this is a good man doing bad things, and you've got to get it across through nothing but a computer generated talking skeleton...and voice acting. Bones doesn't have one of those James Earl Jones reverb voices, so he's got to sound normal, yet sympathetic and devoted, even borderline fanatical and conniving. It would take a stunning talent to pull all that off, and his name is Don Cheadle. He's one hell of an actor, with roles ranging from an impassioned small town prosecutor to a drug-dealing hood caught up in a political race. He's even got the right build for the role, should the latex route be taken.


James Van Der Beek as Triumph
Have you ever read one of Wizard Magazine's comic book Casting Calls? I know I gag at some of their God-awful choices to play heroes that people actual care about. They just love picturing wrestlers, Baywatch babes, and soap stars as their favorite heroes. I usually don't, but visions of teen idols dance in my head when I think about Triumph. No one on Earth liked this egotistical pretty boy, who always whined about how he should have been one of the greats of the DCU. So, you need someone young and blond with that forced pseudo-depth required to deliver lines like, "I love Monica, but I can't betray Susan to my passion." Or maybe, "That's yer dream Daddy, not mahne!" Here's your guy!

Labels: 2000s, Despero, Martian Manhunter, The Rock of the JLA