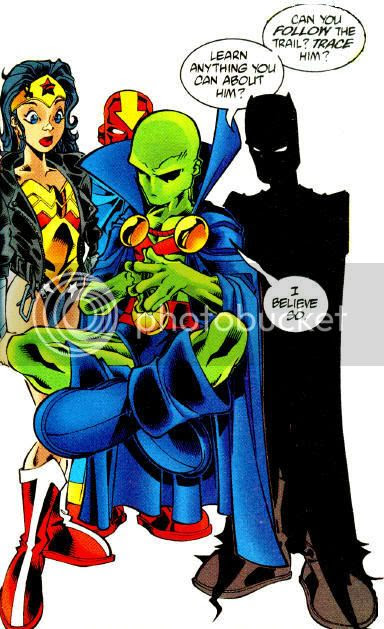 Carlo Barberi pencilled not only a short story by writers Geoff Johns and Ben Raab for the Sins of Youth Secret Files & Origins, but “chased” it with a one-shot JLA Jr. special, from a script by Dan Curtis Johnson. See, D.C. co-created the “Chase” series. See, that was an example of the level of humor in this “Fifth Week” event, y’see? Is this keyboard on? Did I mention poor Agent Cameron Chase and Director Bones were kidified by Klarion as he literally unleashed a rather lanky Black Adam Junior? Which has nothing to do with J’Onn J’Unyr and Wonder “Girl” having to pull a suddenly more rowdy kid Kal-El back from attacking the Point Men before one of the two team was saved by, get this, teen vigilante Anarky. J’Onzz continued to seem his normal self, working with the precocious Steel and Batboy to override security in the JLA Watchtower, though he was put off by the Justice League’s willingness to arm their automated flame-throwers against children. Once there, Little J’Onn used the calm to telepathically search the planet for the whereabouts of their pursuers and Klarion. “The D.E.O. can’t intercept psychic communication as easily as electronic... I’ve found some traces of the Witch Boy... Eerie child... He leaves a strong psychic trail in his wake.” Klarion was in the process of creating more young versions of villains to keep things fair and interesting, and upon sensing the Martians presence threw his a creepy whammy. J’Onzz didn’t glean one other fact beforehand, though. “He’s working with someone else.” The League tried to petition the wizard Shazam for help (J’Onn one of the only party members not to have youthful hubris aligned with the Seven Deadly Sins of Man,) but were denied. In fact, when Kid Flash and Batboy turned on one another, he was the voice of reason, if also defeat. “Cool it! Both of you! You’re acting like a couple of... like a couple of kids! Awww, nuts! We’re never going to solve this problem at this rate. We’ve been crippled!” However, J’Onzz smirked as his despair galvanized the team toward success, the same sort of reverse-psychology he’d employed with other young heroes in the past.

Shades of the JLI-era den mother could be seen when the unruly junior teams were collected at the Secret Sanctuary, where J’Onn came to the aid of Sandy by demanding, “Excuse me! Plastic Man! Do we have to have another wedgie discussion? Don’t make me come over there!” He rightly proclaimed young Kyle Rayner a “yutz” before joining him in combat with Li’l Amazo. Thank goodness no one uttered the name Martian Boyhunter” before the Contessa’s cloned Klarion the Witch Man (it hurts!) reduced a gap-tooted J’Onn and select other heroes to infancy. I’m not sure if J’Onn-boy was still in on the action for the Witch Man’s defeat, or just crawling into the line of fire. I’m just thankful everyone but Lil’ Lobo put the whole mess behind them a few pages later. The “Top Tot” actually joined Young Justice for a time, something the eventually restored “Main Man” will never fully live down. Never mind an underage genetic duplicate called Slobo (argh!) continued with the team before going blind and dying twice over (not in that order.)
Posted by Diabolu Frank at 12:00 AM

People should read this.