GOVERNMENT ISSUES
It takes me several hours to track the book down in evidence. My old report noted the book’s metal case and lock and suggested finding a means to open it. 18 months later and it’s under a pile of illegal fireworks, still locked. The metal cover has a concave motif carved into its center. Had either the Batman or I both pieces of the puzzle, the purpose of the medallion would have been obvious. I feel the uneasiness crowding back in. It’s as if the book itself is alive. A vessel of some sort. The text is varied and for the most part, unreadable to me. But the images are clear enough. Something about an ominous, omnipotent presence and great suffering... Death and then endless suffering. Fire. Extinction. 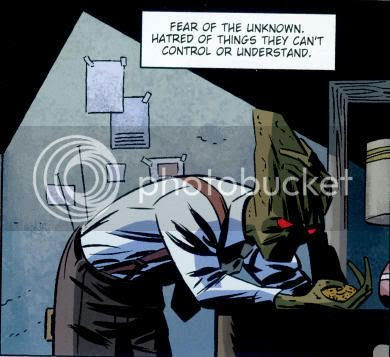 GOTHAM CITY POLICE HEADQUARTERS -1959
Civil right. It has become quite an issue in America, and for obvious reasons, I try to follow the issue closely. This John Henry, for example. A true American hero, like the fathers of the Revolution. He fights alone for the oppressed, against an evil the rest of the country ignores. If only there were more material available, but it is a subject covered somewhat poorly, considering iys importants. My interest in subjects like racism and UFO sightings have made me something of an eccentric to my fellow officers. They kid me quite a bit... but I’ve become the precinct’s resident expert on craziness.

“Hey John, have we got one for you!”
“No doubt, Johnny Boy, this guy is one for your wall. A real yo-yo. He’s sein’ Little Green Men.”

Harry Lieter’s story is fantastic. It has all the earmarks of a classic paranoid fantasy... My job has allowed me access to some of the more... colorful minds on Gotham City. With delusionals, it has taken me a while to distinguish between what is true and what they believe is true.
“So the last five years have been spent developing a rocket to reach Mars. The government is scared to thin--“
“Harry! So wonderful to see you.”
“John, this is Faraday, a federal agant. It would seem that they have jurisdiction.”
“Please, Mr. Jones! DON’T LET THEM TAKE ME! ...YOU’LL SEE! YOU’LL ALL SEE SOON ENOUGH! WE’RE DOOMED!”
“Well, look at that. Interesting hobby you have there, Jones. All the clippings. The UFO stories. Wacky stuff... Prefer a good game of chess, myself... It’s been a pleasure, Detective Jones. Thanks again for you help.”

It’s true. IT’S ALL TRUE. It flooded from him as he gripped my hand. The government knows I’m here. And they are building a rocket. A rocket to Mars.


“Good evening and welcome to another edition of ‘The Big Picture.’ Tonight, we bring you a shocking story of murderous persecution and one man’s struggle against the foreces of tyranny... Three nights ago... terrorists caught up with a man they had been hunting for months... He was beaten and humiliated, then hung from a post in the town square and burned alive... The man they killed was named John Wilson. The reason you’ve never heard about it is because Wilson is black... “John Henry,” the vigilante... scourge of the Ku Klux Klan...”

“Holy moley, that is pure rugged. Can you imagine being burned to death?”
“Sweet mercy, that can’t be true! That man was a hero... a freedom fighter!”
“Jesus, you’re maudlin. But you’re tight. That John Henry was one hell of a man...”
“Tell me Slam, what do you think they’d do if they ever found one of those aliens they always talk about?”
“Jeez, John... what am I, a mind reader?”

-By Darwyn Cooke. “The scene with JOHN AND THE BOOK was meant to build suspense and offer tidbits about the coming menace... The death of John Henry is a brutal blow that breaks the MARTIAN MANHUNTER’s heart. It is the act that causes him to turn his back on his adopted world and risk death to get back home.”

Man, I first read New Frontier a couple years ago while working at the university bookstore. Believe it or not, it was assigned reading for an English class. I figured if a professor thought highly ebough of it to force his students to buy it, it might be worth checking out. Man was I right!

Of course, my favorite scene doesn't involve the excellent chracterization or the action sequences. No, my favorit scene is the one where Wonder Woman flies up in her invisible P-51...with the cockpit covered in her own blood. I don't know why that stuck with me, but it did.

Oh man, reading these makes me really want to see that New Frontier movie. I mean, yeah, it's not going to have all of it, but it does look really, really cool. Of course, I suppose I could, you know, read New Frontier as well, but the DVD will be cheaper.

I am a terrible, terrible person.

As ya'll may have noticed, I've made virtually no comments within the "New Frontier" blogs, relying on "found text" from the book itself. I'm trying to save my own thoughts for later.

That said, I'm really looking forward to the animated interpretation (& Miguel Ferrer's voice specifically.) Adama, I've got to agree with you that the cockpit moment was a perfect forehead slapper. Why hasn't someone done that before? Very effective!