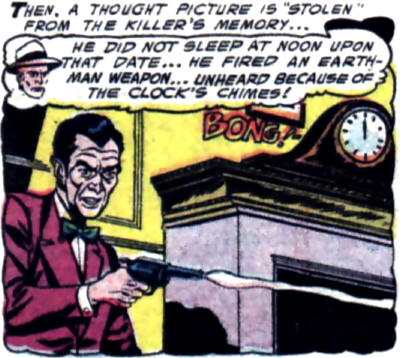 The third and final John Jones script by co-creator Joe Samachson begins with his again referring to "J'ONN J'ONZ," his second story dropping the second "z," and his second use of the formula "1 half-splash cover proxy, 2 panels of origin recap" on the first page. Where last time the Martian seemed to still reside in Erdel's observatory-lab, here he's just gazing from a hilltop outside town. Also, for the first time, both the name "Martian Manhunter" and its Spanish translation, "Martian Detective," are used in print. The "reluctant visitor from space" looked to his home world in the night sky, contemplated his circumstances on "this island Earth," and then resumed human guise to head back to work. "Memories of my home planet must not dull my senses! I must continue to help make crime obsolete here on Earth as we on Mars did during the Great Evolution." 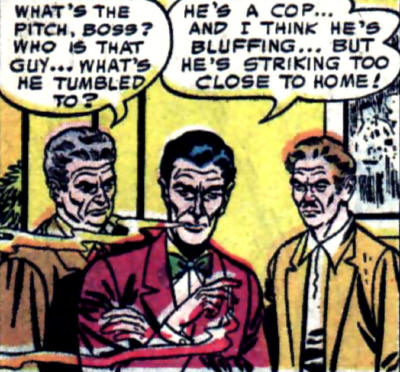 Police had once again dragged the elusive hood Monte Fisk in for questioning, this time on a murder charge that he seemed set on slithering out of. "The Earthmen have not yet learned how to retrace thought processes... I can be of help here..." The Martian Detective employed his "deep, penetrating concentration" to read Fisk's mind, determining his alibi for a murder was secured by firing a killing shot in time to the ringing of a clock chime. As he couldn't prove this fact, Jones set about trying to rattle Fisk into a confession. After confronting Fisk with his unverifiable knowledge of the truth of his killing, Fisk decided it might be best to rub the copper out. In pursuit of this goal, an intangible Jones easily evaded a potential hit-and-run, never quite landed in the bay after being tossed off a bridge, and somehow wasn't flattened by a falling safe. Fisk finally decided "Enough of this! Whoever or whatever that guy is, I don't want to tangle with him! I'm leaving town... fast!" By golly, I do believe Samachson loves ellipses as much as I do... 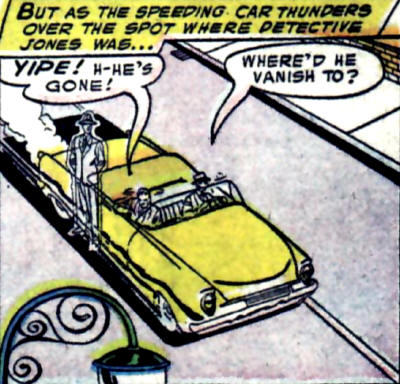 The Detective from Outer Space considered, "His thought waves... he's leaving town... I must act now as my Law Officials on Mars do when evidence is needed... Fisk must break down!" Taking his cue from Jacob Marley, John Jones' "ghost" walked through a wall to frighten Killer Fisk, then appeared on the hood of his speeding car... at least until it passed the most unlawful leaf burning occurrence in history. As Jack Miller wasn't on board yet, that just made Jones roll off the hood, before fully recovering by the next panel, where Fisk had turned himself in for a full confession. "Imagine that, Jones! The city's worst criminal suddenly cracking up and confessing!"

"The Man With 20 Lives" was written by Joe Samachson and drawn by Joe Certa.
Posted by Diabolu Frank at 2:48 AM

"both the name "Martian Manhunter" and its Spanish translation, "Martian Detective," "