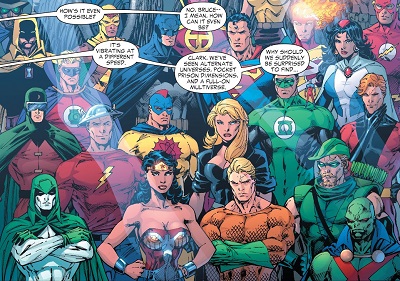 Yesterday. Boy, do I hate when the role of Superman and Batman are played up as founders in the JLofA. They were part-timers whose editors were unwilling to allow use regularly in case it diluted the brand. Worse, everyone's into these secret cabals within super-hero circles these days. Beyond sounding like something off "Prison Planet," it's just so very Legion of Super-Heroes. Also, Wonder Woman was never one of the World's Finest. Her original comics were produced by what amounted to a separate company/studio, like the DC/Wildstorm relationship today. I know she's part of the "trinity" of DC greats, but does that mean we have to whitewash her history as a red-headed stepchild who wasn't even wholly DC's until recent years (see also: Alex Ross' Captain Marvel pimpage?)

Tomorrow: So they dumped J'Onn J'Onzz from the League, and then they killed him? Sounds about right.

Today: Finally read JLofA #0. About as bad as I heard. I'm currently reading "Slaughterhouse 5." Its story is told in similar fashion, but all the "future events," as well as a sort of literary retroactive continuity involving alien abduction, are really just the manifestations of the lead character's senility. At least I believe so. I have about another quarter of the book to go, just as there are seven more issues of JLofA before I know exactly how lousy Meltzer's run will be.

Yesterday: Just finished "Identity Crisis." This Meltzer guy is pretty good with the monologues and heart-string pulling, but this is all really just bad fan fiction. He shouldn't be allowed to play around in-continuity. God, the only thing worse than reading more scripts like this is if Michael Turner's rubber people continue to grace Meltzer's covers.

Today: It's like Turner is trying to do an Alex Ross cover, but instead of live models he employed Kenner action figures. I'm so glad I didn't pay for this.

Yesterday: Why would white jumpsuit Wonder Woman be on the satellite? Didn't they make a huge deal about her having to go through all those trials to rejoin the League after being one of, if not the, first members to bail on team? Plus, she stayed away again for most of the 80's and much of the 90's. If Meltzer can hold Martian Manhunter's 70's absence against him, why not Diana's? Even when she was on the team back then, she was a royal pain, not little miss team spirit.

Batman: "Martians and magic green rings to fight aliens whom turn into trees... That's not-- I don't think that's the fight I'm meant to fight." For a genius, wasn't Batman really lousy at articulating his thoughts there? Also, another retro image of Leaguers turning into trees, complete with bad coloring. Another cross Alan Moore must bear, after having also co-popularized "grim n' gritty."

Tomorrow: Who is responsible for the concept of vague allusions to potential futures? That guy needs to be thrown a beating as well. Also, Eddie Berganza, for allowing Meltzer to ramble on, and to allude to "future" stories some other writer will have to half-heartedly bring to some sort of fruition.

Yesterday: "Detroit? Whose idea was that?"
"Arthur and J'Onn. They said they've got it under control."
For the record, that was all Aquaman. J'Onn just joined after his people pretty much exiled his for exposing their hypocrisy and foiling their invasion plot. Batman continued to fume and predict doom for the League. Wonder Woman called him on his lack of actual intervention.

Tomorrow: Pa Kent will die. Garsh. I thought he was supposed to be dead before Superboy became Superman? And Ma yet lives? Maybe she'll move in with Clark and Lois, forcing them to eat wheatcakes until someone calls the whole thing off via Neron? Schedule the first of many heart attacks with no lasting consequences.

Today: Paul Neary inked Luke McDonnell within and inch of his life. Why bother hiring an original Detroit penciller if the intent is to render his work unrecognizable?

Tomorrow: At least we know Superman and Wonder Woman hopefully never marry. This is why God said brothers and sisters are not allowed to date, either.

Yesterday: One punch? Yeah, let's boil five years of great stories down to one punch. Also, let's not explain how Wonder Woman "joined" Justice League Europe for exactly one issue, quitting without notice.

Tommorrow: I just don't like the Kubert boys, outside of Wolverine and Hawkman. While Jim Lee should one day have a run on Aquaman, he continues to find new ways to draw Martian Manhunter badly. Where is his nose? Is that a double chin? He looks like a turtle! And does that picture mean the latest reboot of Earth-Two will just represent Meltzer's "perfect" League of the Bronze Age?

Yesterday: Howard Porter is the worst Wonder Woman artist ever. I like his JLA, despite the flaws, but Diana if consistently fugly under his pen. Make it stop!

Yesterday, Today, Tomorrow: Continue to be done wrong by Melzer and Michael Turner. Always nice when Rags Morales shows up, though. Is the "zero" issue a dated notion or a value judgment?
Posted by Diabolu Frank at 12:00 AM

Is the "zero" issue a dated notion or a value judgment?

Probably the latter more than the former, considering that Booster Gold just did a "zero" issue that was a tie-in to Zero Hour.

The first work of Metzler's I ever read was Identity Crisis, and that was the title which got me into the DCU at-large for the second time (the first, oddly enough, being ZH!). Reading it now, it does generate the emotional resonance that I think he was shooting for, but I can see the "fanfic" claim on it. Not exactly re-inventing the wheel but at least it's not another punch-em-up.

His Justice League started out with some promise (Red Tornado becomes a real boy? Brilliant!) but ended up with only sound and fury, signifying nothing (Solomon Grundy rips Red Tornado to bloody, gooey, icky pieces? Ugh!). And the whole "Trinity" thing has no basis in reality, being a product of "reality" and not much else. I like Wonder Woman -- hell, I'd take Wonder Woman over Batman (save with the Outsiders) any day of the week and twice on Sundays -- but her adventures were seperate and discrete from the DCU for so, so long.