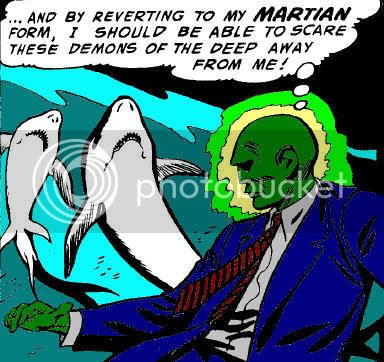 Millionaire Drexel Mansfield was pushed from the cliffside of his shore estate saved only by a fortuitously located fishing net. He continued to explain to Lt. Saunders and Det. Jones that while his attacker was masked, the only person with motive to murder him was his business partner, Laurence Cowan. In the event either man dies, the property and cash reserves of Mansfield-Cowan Real Estate Company are left to the surviving partner. Saunders assigned “the earthbound master sleuth from Mars” to protect Manfield, firstly on a fishing trip. Being the Joe Friday of comics, Jones wore his full suit and fedora aboard the boat, his only complaint being the awful smell, presumably of the bait. Sadly, the whole get-up hit the drink when another vessel rammed the Super-Sleuth and his charge in shark-infested waters. While Mansfield went unnoticed, J’onzz shifted to Martian form to scare the predators of the deep away with his sheer ugliness. Mansfield shouted that he couldn’t swim, necessitating a quick change for Jones to rescue the millionaire.

Drexel Mansfield kept insisting Jones go after Laurence Cowan, but the evidence just wasn’t there. Back at Mansfield’s mansion, Jones used lungpower “1,000 times greater” than human for the first of a great many times to slow the descent of a falling chandelier above his charge. The “Martian Miracle Man” then decided it was time to have a long conversation with Laurence Cowan, before a swank affair Mansfield planned to host at his place that night. Shaken and less than confident in Jones, Mansfield was packing a pistol, which Master Earthbound Detective had to allow due to his permit. At the party, Cowan caught his partner alone with a revolver of his own in hand. “You won’t get away with this, Cowan! I’ve been rigging FAKE murder attempts on myself, so I’d have an excuse to kill you!” John Jones had heard enough, and having conspired with Cowan and sneakily removed the bullets from Mansfield’s automatic, knew there was no longer any threat present. The Secret Visitor from Mars explained that after he learned the awful smell from the boat was shark repellant with which Mansfield had treated his clothes, Jones knew who the mastermind behind the scenario really was. “We’re going to pick up your accomplice, the butler, and go down to headquarters!

"The Phantom Bodyguard" was written by Jack Miller and drawn by Joe Certa. Garish “pop art” coloring by Frank Lee Delano, without any reference. Original colored art can be found here.
Posted by Diabolu Frank at 12:00 AM