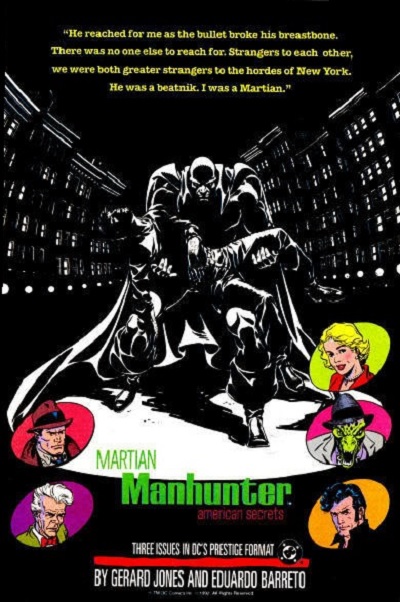 The second solo Martian Manhunter mini-series arrived in the form of three prestige format issues in 1992. Gerard Jones crafted a paranoid tale of Cold War era intrigue, filtered through J'Onzz's very alien perceptions. It was an odd and challenging piece, overlooked and unrecognized in its time and to this day. It honestly took me a few weeks after reading the story to sort out my feelings about the series. I finally came to the conclusion that American Secrets was one of the most impressive comic scripts I'd ever read, truly capturing an otherworldly feeling throughout the story. The influence of David Lynch (especially "Blue Velvet") was strong here, and indicative of Jones' surrealistic approach for what was left of his time working in mainstream comics. Truth to tell, its cerebral nature and the psychodrama that came with it likely played a part in his being pushed out of the industry.

Lending a period flavor to the book was the art of Eduardo Barreto, by my estimation the best work of his career. The landscape of this world was fully realized in Barreto's illustrations, with the rich inks and colors the quality paper stock allowed for giving the series a sumptuous look. While Barreto's style is often anachronistic when applied to modern stories, here the man evoked an entirely appropriate 50's noir feel.

American Secrets is disputably the greatest story ever told with the Martian Marvel. The tale's sophistication and dark undercurrent could have easily qualified it for Vertigo status, had the title not arrived a bit prior to that line's launch and outside its "Goth" scope. Gerard Jones' setting of late 50's/early 60's America remains fairly unique for modern comics, arriving after the McCarthy period and before the Love Generation had really gotten into gear. This period is underrepresented and fascinating in comic form, though I shed no tears for having missed it first hand.

I will point out out that many have complained about the odd continuity complications over this mini-series. John Jones does buy Oreos a half-century before Captain Marvel introduced him to the product in the pages of Justice League, and the early appearance of the natural Martian form does not jibe with the 1988 mini-series. Personally, I see these as incredibly minor flaws in comparison to the title's graces, mostly explainable by the "No-Prize" minded.

Fans who take issue with J'Onzz excess powers might be pleased to note that only his most common 50's abilities were on display here: enhanced strength, flight, invisibility, and shapeshifting. I'm very fond of intangibility, telepathy and some of the cooler applications of Martian Vision (laser specifically,) but it goes to show you can tell a perfectly grand story without them. Truth to tell, I hardly noticed.

Whether the $4.95 price tag or other elements were off-putting, the series was little read. Capitol City Distribution reported selling 13,750 copies of the first issue, 10,600 of the second, and 9,600 of the third. I don't recall if the series made it to booksellers, but if you double Capitol's numbers to account for Diamond Distribution, the circulation was still depressing. In today's market, those numbers would only be slightly underwhelming, but for 1992 they were tragic.
Posted by Diabolu Frank at 7:00 PM

I loved ( and still reread) this series. It was ahead of it's time in many ways. This would fit nicely in with the New Frontier. Fabulous story and art, it can be had for next to nothing. Get it now before the masses catch on. A true lost classic.

Old post, I know, but I just got my hands on this a few months ago and read it. (Thank you e-bay!)


I love love love the tone of these stories. They to me capture the real Noir feel of J'onn as a hardboiled dectective and I just love it. For some reason, the feel to me is simliar to The Spirit.

There are some wonderful images and moments in the books as well. With J'onn in the wasteland, with Patty dead in his arms just twists my heart every time. Brilliant.

The story however left me kind of "eh". There were some brilliant ideas here, but something about it didn't capture me. I like it, but I don't love it. I had to re-read it sveeral times to get some of what was going on, and even now some of the plot holes bother me.

Still, its was well worth the cahs I paid, and I can see myself re-reading it again and again. I wish more writers would have used J'onn like this...I think in this kind of world he shines best. The lone, and lonely wolf, just doing his best to keep the darkness at bay.

Replies to old posts may not get much attention from the audience, but since I moderate all comments, at least I'm sure to read and appreciate them. Thanks!

I discovered this series a couple of months ago and I can't say enough about it. I think putting MM in a noirish setting was pure brilliance and I wish it had been carried through into other stories. The art is spectacular--the panels where you see a bird's eye view of MM lifting a car into the air and another of him hiding behind a doorway eavesdropping in the shadows stand out in my memory.

The tone was great, too. What better POV is there to have during 50's Cold War paranoia than from that of an actual Martian?

I wish they had explored the John Jones/private eye persona more. Maybe someday DC will bring that back...

Since I reformatted the blog's coverage of American Secrets in 2012, I've decided to repost the collected comments on the original version here.

Nick said...
I've always felt that this mini perfectly captures the tone and general atmosphere that more writers need to aim for with MM, but the story itself is forgettable. I don't read it and think, "wow!" I think, "wouldn't it be great if someone took this approach and applied it to a better story?" In the end, it just seems to taunt me with the promise of what MM could so easily be.
June 1, 2008 11:45 PM


Frank Lee Delano said...
I do think the mini-series was an excellent template for writing a solo Martian Manhunter series. I can also see taking issue with elements of the story. However, there are so many memorable lines of dialogue, odd images, and left-field twists that even if you hated it, I can't imagine forgetting it. If nothing else, it leaves an impression.
June 1, 2008 11:52 PM

Nick said...
The story has some crazy twists, but none of them feel organic to me. A good twist should be both unpredictable and inevitable. Unpredictable is easy. Making it simultaneously inevitable is the real trick.

There are some good lines peppered throughout, but those, too, just sort of stand out as something I wish could have been supported by a solid story.

I still have a soft spot for it if for no other reason than that it comes the closest to how I envision the perfect approach to Martian Manhunter.
June 2, 2008 3:49 PM

Frank Lee Delano said...
I can definately see your point. It's funny: I hated the Ostrander ongoing series, and spent time each month it came out on the DC Message Boards, going page by page, picking the latest issue apart. Someone could do the same with AS, but since I like the story, things that were arbitarary become simply "non-linear" to me. For example, I loved the Leavitzville sequence, and I could easily earn a "No-Prize" explaining why it happened as it did, but I know in context there was no good explanation for it. It happened that way because that's what Jones felt like writing, and I'm glad he did, but it's still objectively problematic.
June 2, 2008 4:55 PM

LissBirds said...
I remember how stunned I was reading this that the writers let Patty Marie die. Heroes usually save little girls, right? Not in this story. And I think that's why I like it so much. You don't always win. There was a real emotional weight to this scene that I haven't felt in too many other comics. Today it seems like comics have traded angst for gravitas. More stories like American Secrets, DC, please.
July 2, 2009 12:32 AM

Frank Lee Delano said...
I was also caught off guard by Patty Marie's death. It was gut wrenching, and one of the reasons it took me a few weeks to process my feelings about the book.
July 2, 2009 4:12 PM

I am glad that others actually read this series. When I bought it back in the day my friends said it was too weird and artsy fartsy. I loved it. For my money it's the best beat generation superhero comic ever done. If Thomas Pynchon wrote comics they would be like American Secrets.

I loved this when it first came out and every few years I give it a re-read. It is one of the few comics I do that for. If Thomas Pynchon wrote comics I think they'd be like American Secrets.