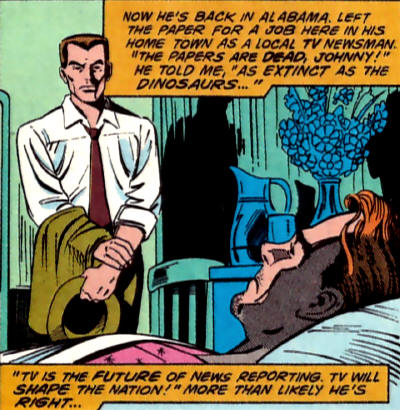 "From the casebook of John Jones... Early spring, 1963. Wilmington, Alabama... My first time in this region of the United States and it seems as charming as it's reputation would have it." J'Onzz flew over the smoky remains of a burnt building on the way to visit a hospitalized friend. "I met Spencer Lee when he worked as a newspaperman for a couple of years in Denver...Used to hang around the police station, badgering me for story leads... Now he's... a local TV newsman." Jones was grateful to Lee, who had suffered a mild heart attack, for uncovering a city hall development scandal a few years prior. "There's a new administration now. The police department is finally getting cooperation." As the pair chatted, a six-year-old black girl with severe burns over eighty percent of her body was wheeled through to the intensive care unit. Lee flagged down his officer buddy, Randy Turner, to learn the details. Mary Lou Wilson was caught in a fire within a "colored church." Jones broke out into a cold sweat, traumatized by the thought. Lee was frustrated at being stuck in bed, unable to pursue a story. He conned John into investigating for him until his release. 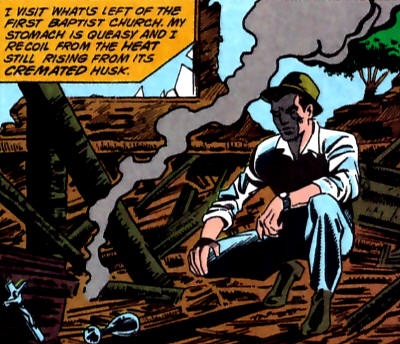 Jones recoiled at the heat from the remains of the First Baptist Church. "This place burned quick and it burned completely. Arson is a good bet. But who would burn down the house of a human god? Wouldn't it be sacrilege to destroy a dwelling of worship?" Jones met Reverend Delroy (who was apprehensive about dealing with the white detective) and Mark Hampton (who ran a new voter registration booth within the church for the black community.) Jones walked away after speaking with the men, thinking, "A place of worship profaned. People afraid to vote. What kind of place is this?"

Jones was later picked up and frisked by police, then turned over to an FBI agent and Police Chief Oxford Banner for questioning. He learned that there was no investigation being made on the cause of the church fire, and acquired a morsel of a lead about an "ol' commie lady, Miz Branham." Visiting her, he learned how she lost her job and her husband the last time she stood up to the town. Mrs. Branham wasn't interested in seconds. Jones reported back to Spencer Lee, but was fed a story about the black community burning their own church to garner support. Jones wanted real answers, and he got them through a telepathic probe of little Mary Lou's memories. J'Onzz burned with her-- within her mind-- watching three white men escape the church before he fell unconscious. 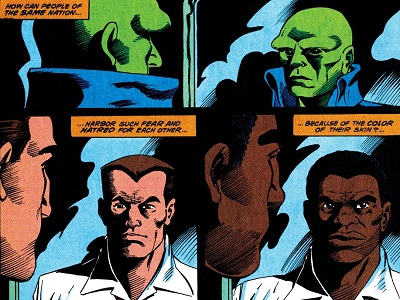 There were too many dead ends, so the Martian became a brother from another planet to continue his investigation. As Bill Smith, he spoke with the Wilson family, who themselves were discussing what to do with Rev. Delroy and Mark Hampton. A call came in informing them that Mary Lou had died, followed by Chief Banner arriving to warn them against protesting. "Lissen here. The child's dead an' you can't bring her back. We just don' want anybody gettin' all screwed up too tight to think. Y'all just keep your emotions for the funeral and offa the street... Look, boy, you get out of hand and what happened to the little girl will only be the start of it."

Meeting with Spencer Lee at the television station WWII, Jones learned his old friend was more exited about his feed going national than people getting hurt in the upcoming protest march. At the site itself, Mrs. Branham informed Jones that Lee was 'in the loop,' knowingly broadcasting the FBI's cover-up story about the protesters burning the church. Furious, Jones grabbed Spencer by the collar, lifting Lee over his head, then plopping him back to the ground. "Who are you? Do I even know you? What kind of evil, deceitful thing are you?" J'Onzz ducked out, turning back into Bill Smith to join the protest. "...and I walk with them. The billy clubs rain down. The dogs tear and rend. I let myself feel it. If I didn't, what would be the point? With each blow... the memories come back... Her memories..." 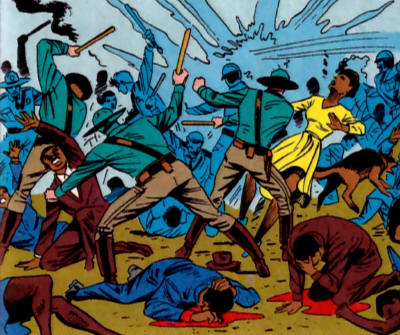 J'Onzz 'remembered' Officer Randy Turner's attack on the girl, as he watched the policeman batter protesters bloody at the march. The brutality convinced Spencer Lee to broadcast the truth on national television... about how Mary Lou died, the police's reaction to a non-violent gathering, the Ku Klux Klan's stranglehold on the South, and government corruption.

"Heat Wave" was written by Pat McGreal & Dave Rawson, featuring art by Dave Cockrum & Peter Gross. It is exactly the kind of story I like to see use J'Onn J'Onzz, but not exactly a fine example of it. What we have here is a story about racism where the actual black characters are pushed to the periphery in favor of an ineffectual quasi-white protagonist addressing thoroughly evil white racist caricatures. It's one thing if a hero with shapeshifting powers chooses to "feel the pain" of the Negro. It's quite another when an invulnerable Alien Atlas with laser vision watches children set upon by dogs while impersonating a relatively powerless bystander. Do something, Mr. Sympathetic Liberal Guilt Green Man! I'm sure the Australian writers' were moved by their viewing of Mississippi Burning, but between their cluelessness and Cockrum turning in some of his worst comic art ever, this "important" story is something of a travesty.
Posted by Diabolu Frank at 12:00 AM

Ah yes. Because all white folk in the South are, secretly or otherwise, racist.

Beyond that though, sounds like a good story. Using J'Onn J'Onzz as an observer to predjudice and discrimination is an easy route to take, but it seemingly can produce a lot of useful results, so one can't really blame the creators who use it. It's like the Silver Surfer lamenting about man's cruelty to man; it just comes natural.

And I'll even admit that in Alabama in 63, yeah, most white folk probably were somewhat racist, although probably not to the over-statement contained herein, and in pretty much every other depicition of the South produced in either New York or California.

As a person from Texas-- generally nuh-uh, but with major reservations. In the writers' defense, they're Australian, and the story was set in '63. Today, Atlanta, GA is a black haven, and most African-Americans are Southerners. Doesn't mean they aren't suppressed and exploited still, though.