The Vile Menagerie: THE MASTER GARDENER 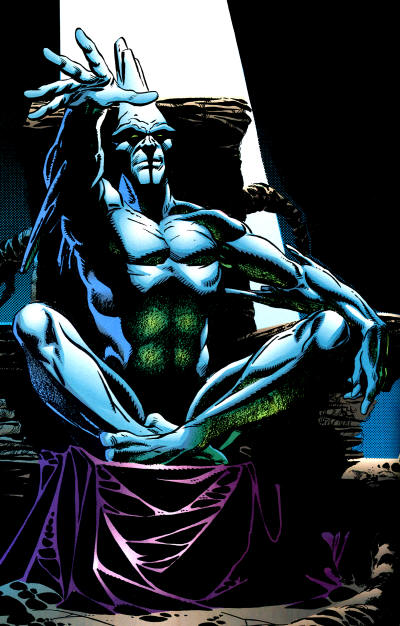 History:
"I was the Master Gardener of Mars! But all my knowledge of organisms couldn't stop the spread of the microbes that slaughtered our children! My knowledge kept me alive, age after age, enclosed in my loneliness, haunted by the funeral pyres of my babies. Then the Lizard Men came. Lonely, isolated Lizard Men. I made them think I was their lost Father-God. I used my horticulture to give them new thoughts. To make them my children. But I couldn't bear the dead plains of Mars. I needed a home. I needed a world rich with life. A world I could prune and nurture into harmony. And that world is here!"

The Master Gardener and his shape-shifting Lizard Man came to Earth during World War II, and took advantage of the terror and confusion of the time to infiltrate governments and communications cartels. They grew plants bearing fungus that bonded to the human nervous system, allowing them to control the very words they spoke under threat of spontaneous combustion. Based in Puerto Iberez, Cuba, they exported the plant around the world, infecting much of the human population with their tyranny. They were the real reason the Justice Society of America was forced to retire, and held sway over all media. "Don't they look the other way when they see the truth? Don't they settle for the happy pictures I give them of what life should be? They feel safe so long as there are warriors in the sky to protect them from the evil 'other...' They feel content so long as I feed them a simple picture of the world."

"It was my mission. This planet has become an event nexus, an intersection of cosmic forces that create great beings and attract great beings. It would continue to produce 'heroes' had I not come. In the quest for harmony, great individuals only bring chaos. Rebellion. Conflict. But such heroes can be tamed! They can serve harmony! They can help us keep our children!" Perhaps, until the plot was uncovered around 1959 by J'Onn J'Onzz, the Manhunter from Mars, who turned on his Martian brethren.

The Lizard Men were immune to fire, so they employed advanced flame throwers with impunity against a Martian Manhunter whose weakness they had discovered. They were unaware their "Father-God" shared this vulnerability as they fired upon both beings in a final conflict. The Master Gardener chuckled at his "children's" error, before appearing to collapse into oblivion. Leaderless, the Lizard Man conspiracy fell into disarray, and was subsequently dismantled.

Powers & Weapons:
The Master Gardener presumably possessed all of the powers typical of Natural Martians, including great strength, relative invulnerability, flight, telepathy, invisibility, intangibility, and shape-shifting. As the ersatz deity of the Lizard Man, he had a chameleonic army at his disposal, as well as their saurian "lizard-dogs," which were powerful enough to hinder a full-powered Martian. The Gardener also had access to a fantastic arsenal of alien weapons, and briefly controlled all of the major armies and technology of Earth.

Weaknesses:
The Master Gardener was afflicted with a catastrophic vulnerability to flames related to H'Ronmeer's Curse. He appeared to perish almost immediately to direct exposure.

Distinguishing Features:
The Master Gardener was exceptionally pale for a non-White Martian, calling his race into question.

Quote: "The human... should show me his gratitude... Gratitude that I crossed the starry gulf to bring his competitive, conflict-ridden world together... in perfect peace, serenity, equality, and order. "

I decided to wait until you had posted all of the parts of this story before commenting, and then I saw you put up this Vile Menagerie as a sort of capstone, so I decided to put it here. So there!

All in all, this storys sounds very good. Sort of like what the Manhunter mini from a few years back wasn't. The idea of J'Onn as the ultimate outsider (little "O") is a good characterization for him in my mind, and serves to make him distinct and unique from the Kryptonian he is so often negatively compared to. Putting that sort of character into a Red Scare, who-can-you-trust setting makes perfect sense even before you factor in shape-shifting, invisibility, and mind-reading. I mean, this isn't exactly a leap of logic at this point, is it?

There is a need for detectives outside of Gotham City, one imagines. And some of those crimes might even involve strange supernatural or alien forces which would require a gumshoe who also happens to be from another planet and his special skills. And some of those crimes might be the kind that humans tend to look the other way on, lest they see themselves reflected in it, to which the alien peepers would see only truth. The Martian Manhunter cannot be this hard to write, to the point where no one knows what to do with him and just shrugs ineffectively at any suggestion to the contrary.

It's stories like this which give me hope. Given the state of the Manhunter lately (I liked his turn in the two issues of BATO he was in, where Dixon wrote him like *gasp* the Martian Manhunter), it has to be for the best that he be killed off. In a few years time, someone will devise a way to bring him back (body-jump, anyone?) and Our Favorite Martian Who Is Not Marvin will be back in action. And hopefully "action" will mean stories like the ones I alluded to up above, or like the ones you refer to in your anniversary posts. Stories which treat the Manhunter as a character with meaning and purpose, not just a yardstick for how badass the JLA's next foe is.

This got way off topic, sorry... but I have added American Secrets to my Watch Out For list.

...and even after using a bio page to help fill in information cut from the overlong story synopsis, I taked on and advertisement page with additional thoughts and review! Never underestimate my myopia! ;)

It hadn't occured to me to mention that J'Onzz's powers were limited to those of his late 50's appearances until I read your reply, so I snuck in a paragraph on the matter in the final (ad) post. Thanks! I sometimes lack the perspective to notice that sort of thing without a helping hand.

An upcoming "best of" post will present another story very much in line with your idea of a detective covering "strange supernatural or alien forces." I agree!

I only realized a couple days ago another "anniversary" post will fall during memorial month, so I'll really have to step up the game there.

You may stumble upon "MM:AS" at a con, but finding all three in one place is uncommon. However, Lone Star Comics has a set in VF condition that would set you back all of $4.50.