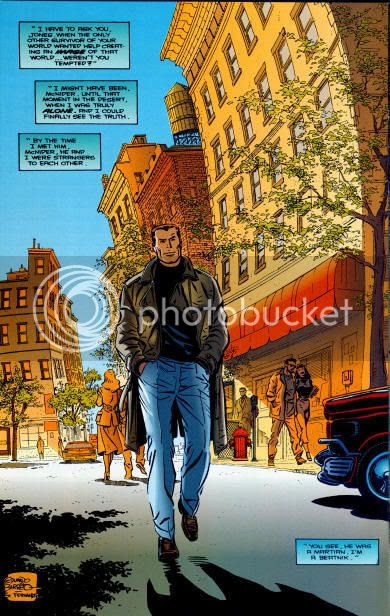 "A long drift down the Colorado River, then flight through the hills of Mexico and a stint as a Cuban sailor across the Gulf. Where I find the strength to keep going I don't know, unless it's the rum and the conga." Making his way to Havana, Jones learned about the American gangsters' stranglehold on Cuba. "I ask questions. Not too direct to bring the lizard-dogs sniffing, but direct enough to get quick answers... There are rebels in the hills, between here and Puerto Iberez... Mr. Gioconda's men are running weapons for the government troops. 'Strange weapons,' I'm told."

Jones met a poet who's book of verse was identical to the one he heard at the start of this all in New York. "The truth is written by many people in many places... Poetry be easy. But it's as near as we can get." The fungus held the poet's tongue, so he spoke cryptically at first of Latin America and "people who crossed a vast gulf, came like gods to colonize, to plant... to shape... Cuba is an island, isolated and alone. So we reach to cross our ninety miles of aloneness. Agriculture and horticulture link Cuba to the world. In her dark interior valleys the horticulture is rich." Jones noted, "You're all islands on this planet." Less one, as the poet reckoned, "And now, I'm afraid I've talked to much. It's time for me to burn for that ancient communion with the night!" His eyes bled, his face bubbled, and then he combusted. Jones fled the scene invisibly.

"I am with you in Cuba, and on the roads of America and the streets of New York. I am with you, and Melvin Keene, and all of you who see the truth but cannot speak it because of that terrible horticulture of your conquerors, that fungus in your brain. I am with every one of you who has been burned alive, and every one who risked that burning by sending coded messages of the truth. The truth of the shape-shifting conquerors who came to Earth during the terror of war, who used that terror to infiltrate governments and communications cartels, to spring the sleep of sameness over this boiling, fertile world. The truth bent into strange new shapes by profiteers and power-handlers, willing to lie down with lizards whether they could see them or not. I am with you, the defenders and the victims of the truth. I am with the murdered, and the frightened and the fooled."

J'Onn J'Onzz was with Perkins Preston, who happened to be playing at the Club Mona Lisa for Mr. Giaconda, who alerted the Master Gardener. Most notably, he was with Fidel Castro and Che Guevara, who he spurred into a raid on Puerto Iberez against the invading aliens. Perkins Preston was in turn with J'Onn J'Onzz, after learning the aliens had been using his songs to distribute subliminal messages, but he still had reservations. "These folks... they're not communists, are they, Detective Jones?"
"Communists. And what are they? Beings who live through the group-- and not themselves? Is this baseball playing warrior, this self-assigned savior a communist? There are no communists on this world. There were on mine. They're all dead now."

Perkins Preston confronted a lizard horticulturist in his garden of domination with what he had learned. "If you know this much, you must be one of the chosen. And that means I don't dare kill you. What do I do with you? What would the Master Gardener want?" The concern was taken out of the lizard's hands by the Manhunter's own, in the form of a fist. The Martian then assumed the horticulturist's likeness, and led Preston past troops with saurian-dogs. "But I am something they can't see inside. Why? Why have they failed to catch me... even now? Even here?"

The pair walked into the cavernous den of those engaged in "the cultivation of human culture." Strange organic television monitors displayed various aspects of media currently in circulation, their hidden messages made clearer as they overlapped. The concealed Martian tried to use Perkins Preston to access the Master Gardener when his vizier appeared. "The Master Gardener knows of this human, as he knows of everything. You will follow me, horticulturist... along the canal." This river teemed with the organisms that spawn the fungus. "It calls to me, strangely. Like these dark, cool chambers of sentient fungus call to me. Like an echo of my lost life."

The pair were presented to the Master Gardener in his throne room. "The human... He should show me his gratitude... that I crossed the starry gulf to bring his competitive, conflict-ridden world together... in perfect peace, serenity, equality, and order. I've given you Leavitzville! I've given you Skeeter! I've shown you how to keep your children! All I ask in return is that you give me a place to end my lonely wanderings through the stars... a place to call home."

The still incognito J'Onzz responded, "...we undermine their faith in the truth! Our quiz shows reduce truth to bits of entertaining information! We teach them to memorize rather than think!" The Master Gardener responded, "... you know how easy it is to train the masses. The artists are harder. And the heroes. They had to be manipulated. Deals had to be made, with subversives like Keene... But heroes can be tamed! ...And you can serve better than any!" The horticulturist asked, confusedly, "Me?"

Perkins had previously proven himself able to see even an invisible Martian Manhunter, and this held true when he become conscious of the fact that the Master Gardener was not what he appeared to be. Before the duo's eyes, it changed into a natural form Martian! "Haven't you wondered why my people have been reluctant to kill you? I was the Master Gardener of Mars!" He explained how he came to power among the Lizard Men, then offered J'Onzz the chance to join him in resurrecting Mars on Earth. "Join me, brother! I don't know how you came across space and time to find yourself here-- but it can't be accident! Destiny brought you! Destiny placed you among Earthlings, so that you could understand their souls better than I! Help me save our new children! From themselves! Help me give birth-- to a Mars regained!"

"I know your pain, brother. But I won't pervert a world to ease it."
"You believe what they believe! Forget what Earth taught you! Remember MARS!"
"Mars is dead."

Attacking the Gardener both with ideology and fists, it wasn't long before J'Onzz attracted lizard guardsmen. Firing their flame projectors, the lizards scored a direct hit against their ruler. "But master...the fire doesn't hurt us!" The Master Gardener chuckled as he fell to an immolation-induced apparent death; "Do you hear that...brother? The fire...doesn't hurt...'us.'" J'Onzz swept the lizard guard off its feet, then ordered their troops to bomb the valley using the Gardener's communications equipment. He then succumbed to another blast of flame.

"I hear through the flames the wailing of my family. Then not that, but a deeper sound. The thunder of bombs. I am lifted and carried away. By the Fire-God, I think, to his Parlor of Red Death. But it's the canal I feel. So cool. So dark. It calls me strangely." J'Onzz was seemingly carried into the safety of the canal by Perkins Preston.

Back in the States, John Jones read a newspaper announcing Preston's death in a plane crash over Cuba. At his side was Charles McNider, who noted, "I suppose we won't be able to discuss the truth behind recent events for a long time. So long as our nervous systems are bearing our little... 'guests'..." Jones promised to finish apprehending the loose bands of directionless Lizard Men, affirming, "...eventually, this world may pour forth its 'great individuals' again." The former Dr. Mid-Nite asked if John was tempted by the Gardener's offer. "I might have been, McNider. Until that moment in the desert. When I was truly alone. And I could finally see the truth. By the time I met him, McNider, he and I were strangers to each other.
You see, he was a Martian. I'm a beatnik."


Back to Part Five

Forward to Review
Posted by Diabolu Frank at 7:00 PM