Martian Manhunter in the 1990s 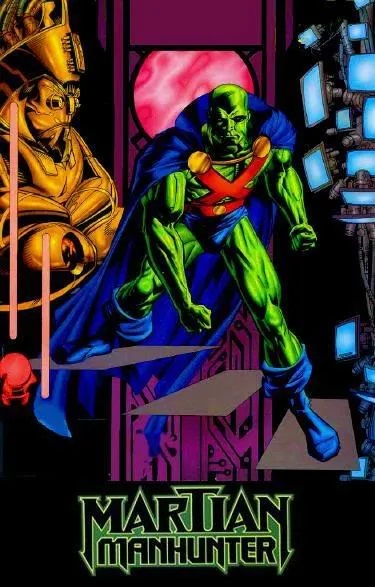 The 1990's were J'Onn J'Onzz's finest years. He entered the decade a star in the Justice League International line of books, drawn by a number of future idols; including Adam Hughes, Bart Sears, and Mike McKone; who influenced the artistic interpretation of the character. During a brief hiatus, he starred in a second solo mini-series, this time in the prestige format. Unbeknownst to readers, and to some degree the Martian himself, J'Onn J'Onzz almost immediately rejoined the League in the guise of the new African-American hero Bloodwynd. Combining the influences of the magical spirit of a slave with the diabolical entity Rott, "Bloodwynd" served the Manhunter's role for about a year and a half, most notably during the arrival of Doomsday and the mourning that followed Superman's seeming death.

Once Martian Manhunter was freed of Bloodwynd, he became the primary star of a new series featuring rotating line-ups of super-heroes for "Mission: Impossible" type assignments called "Justice League Task Force." The only other regular member for the book's first year was former Detroit teammate-turned-surrogate-daughter Gypsy, the first ongoing supporting player for J'Onn since Zook. The book continued to place the Martian Manhunter in the lead role, but shifted focus to a stable line-up of young heroes under his training. Among them was a newly heroic Despero, who had developed into Manhunter's primary nemesis in the 90's, and would inevitably return to that role. In the meantime, the "Task Force" series ran three years.

J'Onzz continued to take part in crossovers, was given more solo stories, a special,
and co-starred in mini-series. As portrayed by David Ogden Stiers, Martian Manhunter finally made the leap to live-action in a failed Justice League pilot film for CBS.

Toward the end of the decade, Grant Morrison and Howard Porter were enlisted for roughly the fifth Justice League relaunch within less than fifteen years. Feeling that the League hadn't fully benefitted from the presence of their famed founding members in decades, "JLA" was launched with the Magnificent Seven originals to massive critical and commercial approval. Even in such rarified circles, J'Onn J'Onzz was often treated as either the team's leader or one-third of the triumvirate guiding the League, alongside Batman and Superman. Suddenly, the Martian Manhunter was everywhere: guest appearances, spin-offs, mini-series, action figures, posters-- countless comic books and pieces of merchandise. At the tail-end of the decade and just a few years after the launch of "JLA," the Martian Manhunter was granted his first eponymous ongoing series ever, by the acclaimed "Spectre," "Grimjack," and "Firestorm" team of John Ostrander and Tom Mandrake. Quite simply, on virtually every level, J'Onn J'Onzz was at his career peak-- a lifetime high.