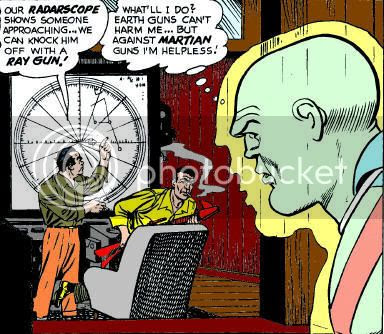 A convertible carload of gangsters pulled up to an armored truck and used a device resembling a tuba to suck the money right out. The guards tried to draw their firearms, but were frozen in place by a second fantastic weapon. When the news reached the police station, Captain Harding bellowed, "Bah! Super-magnets... paralyzing rays... this I've got to see for myself! Come along, Detective Jones!" With a swarm of other police cars, Harding and Jones encircled ex-convict Buggsy Roach and his boys. Guns drawn, Harding and his troop approached, demanding "Don't be a fool, Buggsy! We've got you surrounded... You can't get away!" Super-weapons from a space capsule found in an empty lot said different, much to Jones' chagrin. "Great stars! Those are Martian weapons! Th-they must have fallen out of a space ship-- and somehow floated to Earth..." In this case, Buggsy sped away thanks to a super-heat wave rifle that melted bullets in mid-air. 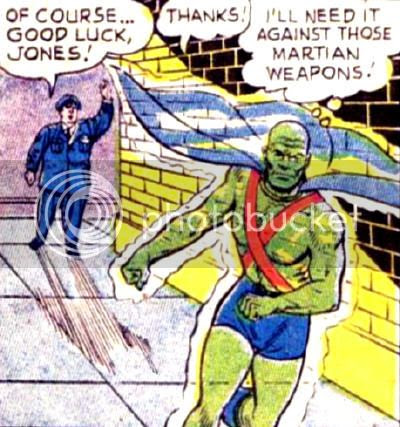 Jones slipped off to assume his super-powered Martian form, when Captain Harding happened by. "Jones! Y-you're-- you're... changing into... an invisible outer-space being! Why... you must be a Martian!" Wincing, J'onzz thought "M-my secret is out!" Imagine his relief when Harding assumed, "Wait... what am I saying? It must be Buggsy's outer-space weapons that changed you, somehow! J-Jones... wherever you are... tell me... what will you do, now that you've been changed in such a terrible manner?" Still invisible, J'onzz played along. "My only chance is to get hold of those weapons, Captain!"

Super-eyes followed the getaway car's tracks to a cabin off a dirt road. Buggsy's men were almost immediately alerted to his presence. "Great falling stars! A Martian radarscope which can even detect invisible objects approaching!" Buggsy figured, invisible or no, just point a ray gun where the radarscope said the intruder stood. "I-I may be the most powerful being on Earth... but I'm helpless against ray guns from my own planet! I must reach those weapons first! Great Rings of Saturn! I accidentally knocked over an oil lamp and started a fire!" Great googly moogly-- you'd expect a hemophilliac to be ever vigilant against sharp edges, but this big doofus can't manage to avoid a lit oil lamp? Warning signs: Light. Heat. Kerosene vapor. Odor. Often present in shacks near a cabin. 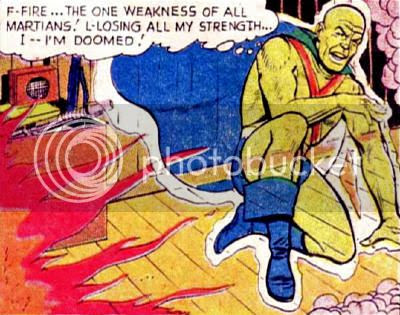 If you've ever seen a Warner Brothers cartoon, you know what else is always in that rustic shack out back: a barrel of gunpowder! The Martian Manhunter noted this, and rolled it where the fire was most intense! That would be a boom with three o's. "It worked! The blast couldn't damage my Martian body-- but it hurled me out of here in a hurry!" I suppose invulnerability didn't leave the body with the super-strength lost to the blaze in the shack? In this story, at least? The Super-Lawman laid out the explosively disarmed gang invisibly and John Jones hauled them to jail. Captain Harding mentioned, "I'm certainly glad you found the weapon to turn you back to normal before the whole lot was destroyed in the fire, Jones!" John thought to himself, "Yes... my secret weapon is my own Martian powers-- which I will use only to uphold the law!"

“The Menace of the Martian Weapons!” was written by Jack Miller and drawn by Joe Certa. Original colored art for the headline pic can be found here.
Posted by Diabolu Frank at 12:00 AM

I love that strategy -- causing an explosion for the propulsion aspect only, and hoping (I guess?) that you'll survive. As a plot though, the idea of regular crooks getting ahold of Martian weapons reminds of the much later Fourth World stuff where Darkseid would equip Intergang with all the crazy technology. It's not a bad motif, all told.

I must confess-- the story only made the "best of" cut for its direct tie to JLofA #144. Yeah, being one of the only 50's entries available didn't hurt, either. Still it had its moments, and wasn't an embarrassment, which was too often a feat unto itself...