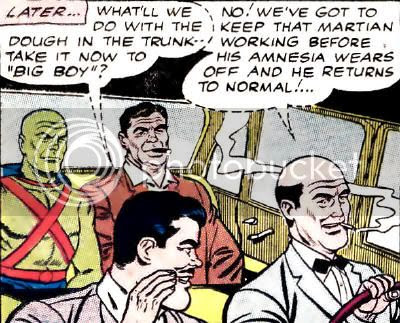 "Late one afternoon as the Graybar Bank* prepares to close for the day," it was robbed as part of a spree by "Big Boy" Benson and his mob. Detective John Jones happened by as the hoods raced off in their getaway car, so the "famed lawman" ducked into an alley to undergo a startling transformation. "Moving at a speed that makes him invisible, the Sleuth From Space pursues the crime car to the outskirts." The Martian Manhunter picked up their automobile and shook the crooks out, but "Big Boy" wasn't among them. "Abruptly, J'onn J'onzz falters, looks dazed..." The Alien Amnesiac left the thugs clueless, until a news report over the car's radio announced, "Scientists report a sudden cosmic cloud passing between Mars and Earth! The effects are yet to be determined!" The goons put two and two together, and come up with a crime spree, "as long as it lasts!"

The mob convinced the Martian Marvel they had saved his life when he first landed on Earth, "and in gratitude you joined up with us!" J'onn a thief? Impossible, J'onzz thought, until he saw the loot he'd supposedly helped steal in their car with his super-vision. The robbers were pleased as punch at pulling the wool over, and planned to tell "Big Boy" in their "usual secret way."

Not long after, the racketeers sought help hijacking a mint in new currency from a moving train. "Any ideas, J'onzz?" Twisting the train tracks ahead into a nearby forest, to loot the train in privacy! "Wowie! Wait'll 'Big Boy' hears about how we broke into this steel car!" J'onzz asked who "Big Boy" was. "The big boss! Too bad we can't take you to his hideout, pal! He wants it kept secret!" The scoundrels were set on exploiting the Martian for as long as possible, including conning him into revealing his secret Earth identity for a photograph. "When he's normal again, every gang in the country will be on guard against him!" As an aside, J'onzz also seemed to forget his weakness in the presence of fire, as he breathed in second hand smoke from a cigar and cigarette during a car ride.

The rogues flew the criminal J'onn J'onzz atop a biplane to steal millions in diamonds off an ocean liner. Using super-breath, the Alien Atlas sent the massive ship airborne, then began flying with the whole thing in his arms. The only place to stash an unexpected haul that huge was "Big Boy's" hideout, so off they went. "Big Boy" Benson was surprised by this spectacle as he lounged on a patio, listening to music on the radio. "Well-- it's about time I met the newest member of the gang!" Not so fast... as the Martian Manhunter asserted "it was only a matter of time before I captured you!" Just then, the radio broadcast an update on the cosmic cloud's passing "without having had any effect." One of the stickup artists drew on J'onzz, "but Martian fists, flashing at super-sonic speed, make short work of the opposition."

"Later, at police headquarters," Captain Harding congratulated the Martian Manhunter on outfoxing the gang. "Big Boy" Benson protested, "You forget-- we photographed your Martian in his Earth guise! He won't be much use to the law after we make copies from the negative we hid!" However, their photo was of a chubby-faced amiable fellow that shared few of John Jones' features. "If I had amnesia, how could I remember the exact Earth guise I'd chosen?" A confused Benson thought, "Hmm... I still can't make up my mind if he really had amnesia-- or if he was just bluffing so he could find out where my hideout was?"

“The Crimes of J'onn J'onzz” was by Jack Miller and Joe Certa.

(*Graybar Bank? As in "graybar hotel?" Or GraybaR Electric? "I wanna spend all your money, at the Graybar?")
Posted by Diabolu Frank at 7:00 PM

I dont recall, but most likely yes.