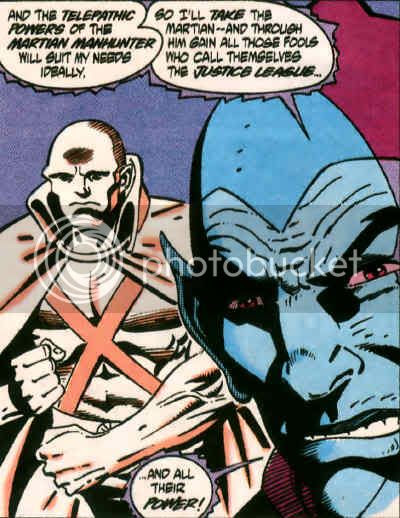 "On the dark side of the moon lives all that is darkest in human nature. And down within the deepest crater of that distant sea of dust and rock lies evil's greatest monument. It is Eclipso's castle... and Eclipso's prison!" The God of Vengeance had determined after years of slinking away from super-heroes that he could instead possess them-- through their own anger and contact with one of his black diamonds. "The handful of heroes whose bodies I already possess are only the beginning... What I require goes beyond raw physical power. I must have other abilities to take me to the next stage. And the telepathic powers of the Martian Manhunter will suit my needs ideally. So I'll take the Martian-- and through him gain all those fools who call themselves the Justice League... and all their power!"

Among those who had been "Eclipsed" was Green Lantern Hal Jordan. As it turned out, Hal had finally gotten Guy Gardner booted out of the Corps right after Guy abandoned the League on Almerac, but Gardner was then temporarily reinstated by Kilowog to help deal with Jordan. Gardner and Dr. Bruce Gordon (the solar scientist and former longtime Eclipso surrogate) made their way to the new J.L.A. headquarters, where a meeting was called on the matter by Superman. Predictably, the Man of Steel was late to his own gathering, as he was off "rounding up some more help," leaving his teammates to bicker with one another. Even the arrival of Metamorpho the Element Man was more timely. Fire took this as an opportunity to introduce the Justice League Europe member to the new additions to her team, Maxima and Bloodwynd...
"Pleased t'meetcha."
"As am I. I have heard much-- much about you." 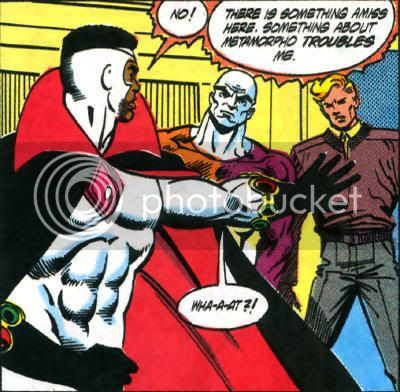 Meanwhile, Superman tried to talk Wonder Woman into joining the team. "Let's just say I'm not completely comfortable with this League yet. Guy Gardner is unstable. Gold and Beetle are a couple of comedians. And Maxima's not right for any group." Despite Kal-El's obvious determination, optimism, and enthusiasm, Princess Diana opted not to join his misfit band. However, the Amazing Amazon soon encountered Eclipso on her own, and realized she should aid the League in bringing about his downfall.

Upon her arrival at headquarters, Wonder Woman received Superman's undivided attention, which infuriated Maxima. The queen stormed out of the building, and soon fell under Eclipso's influence. This was thanks to the Eclipsed Will Payton Starman, who mentioned "I feared the Martians absence would stall my plans... but the powers of this body are incredible! The powers of the mind... intoxicating!"

Back at the meeting, Bloodwynd had detected that "There is something amiss here. Something about Metamorpho troubles me." The Element Man immediately went on the offensive, calling Bloodwynd into suspicion, and swaying Guy Gardner to his side. Ice jumped to the necromancer's defense against her supposed boyfriend, noting "how valuable Bloodwynd's been to the team!" Everyone began arguing, leading Superman to scream, "Enough!" so loudly the wind literally knocked folks off their feet. "It's time you people learned to straightened up and take orders!" So much for all those "ours" and "wes" when discussing his teammates, eh? Metamorpho joined Maxima in bailing on the team.

While Blue Beetle showed off his solar powered energy pistol to Bruce Gordon, Booster Gold tried in vain to pick up Wonder Woman. A news report came in from the Diablo Azul Nuclear Waste Facility that indicated it was under attack by Eclipso. Bloodwynd said "I fear his reasons are far more devious than we might imagine. Dr. Gordon has painted Eclipso as evil personified-- and it is in evil's nature always to corrupt what is good. I cannot shake the feeling that the forces of good have already been greatly compromised." 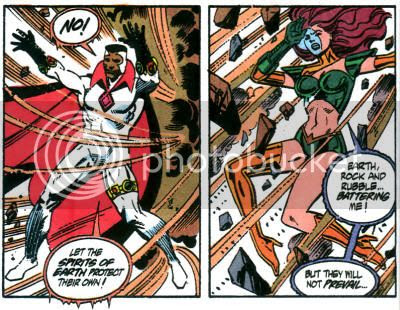 While Bruce Gordon and Blue Beetle remained behind to produce more solar guns, the rest of the team let out. At the waste site, the Eclipsed Maxima was behind the mayhem, and dealing with toxic materials kept Superman out of the fight for a time. In his absence, Bloodwynd stepped up. "Let the spirits of Earth protect their own!" Earth, rock and rubble battered Maxima at the sorcerer's command. Still, the dominated Almeracian used her telepathy to mentally control Wonder Woman, initially dividing the J.L.A.'s forces. However, Superman chose to capture the Amazing Amazon and fly her beyond Maxima's reach, while the rest of the team ganged up on the Eclipsed alien queen. Believing the fight to be over, Bloodwynd suggested that "The rising sun will have the same effect as the solar gun-- driving Eclipso from his host." However, Maxima was only playing possum, as she first controlled and then endangered Booster Gold as a distraction so that she could escape.

In the meantime, Metamorpho appeared to return to J.L.A. headquarters, prompting Bruce Gordon's swift exit. Shortly thereafter, Eclipso arrived to chase Beetle throughout the base, until he was finally driven off by solar lighting. Metamorpho at first seemed to have been Eclipso in disguise, but more likely this was instead the shape-shifting Starman, or rather he was a dude, playing a dude, disguised as another dude. In the aftermath, Blue Beetle disappeared in a flash of light, leaving his teammates to pick up the pieces.

In a later Superman annual, the Man of Steel became Eclipsed, leaving only Booster Gold, Fire, and Ice to make up the League. Bloodwynd was absent from two annuals in which this three member J.L.A. appeared, with no explanation given, until he returned to the fold in Adventures of Superman Annual #4.

"Maximum Eclipse" was by Dan Mishkin and Dave Cockrum with Dan Jurgens and Jose Marzan Jr.
Posted by Diabolu Frank at 7:00 PM