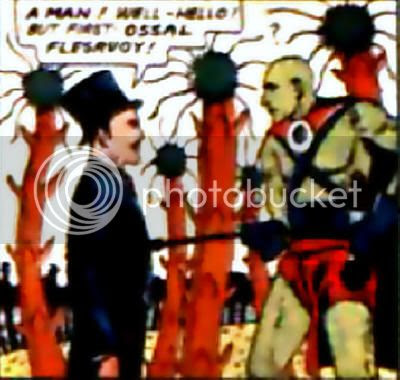 Poora was the son of Ool, ruler of the planet Saturn circa 1939. Poora bore a strong resemblance to the classical green-skinned Martians, but he possessed no powers to speak of. Poora was good with a lasso, was much more even-tempered than his father, and carried a knife strapped to his belt. Poora wore a red-orange cape with a large white clasp and a blue cabochon in the center. His shorts matched his cape, and he had blue gloves, boots and chest straps.

It is striking how simliar Poora is to J'onn, a whole decade-and-a-half before his introduction.

And might I add that I am awfully nproud to have entered the word "cabochon" into the Idol-Head's vocabulary.

I totally referenced your John Carter post for that, girl!

We may have the same scan. I tried doctoring and enlarging mine, to mixed results. I just hate a muddy scan, and I like mine to be unique, so I know when Comicvine or another site gets unauthorized use out of 'em.