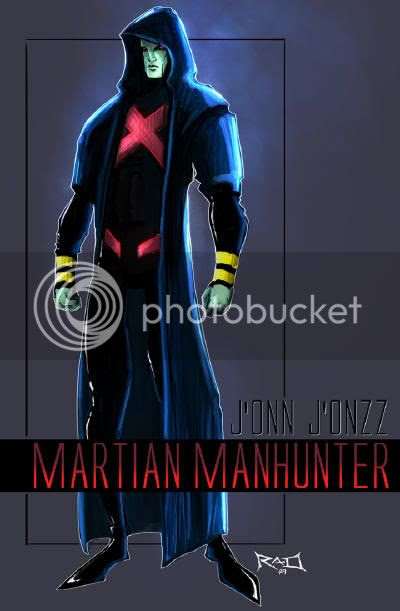 I was over at Comics Make Me Happy! earlier today, where LissBirds took a look at a Martian Manhunter redesign by Joel Ojeda. I went off on it, as I'm wont to do, because it had tribal tats and claws and was pretty much a laundry list of cliche in trying way too hard to be "bad." About the only thing more indicative of a complete absence on imagination is to just throw a trench coat or a hoodie over an almost all black outfit...

Here's my take on an updated Manhunter design. I switched out the Old school style cape for a more hooded approach, I covered him in black again to pop out the red symbols as well as figuring he can be hurt by fire so the material is Fireproof. Again I feel trying to move away from a ton of muscles showing to emphasizing the symbols or primary colors of the character.

I'm kind of amazed how much thought went into rationalizing turning the Martian Manhunter into the Crow.
Posted by Diabolu Frank at 11:19 PM

Fireproof suit? Why didn't I think of that! That actually makes sense!

I really dislike hoodies. In real life, too. And this one makes him look part Druid.